The Supreme Court justice reflects on her legacy -- and the little-known case she wishes had preceded Roe v. Wade 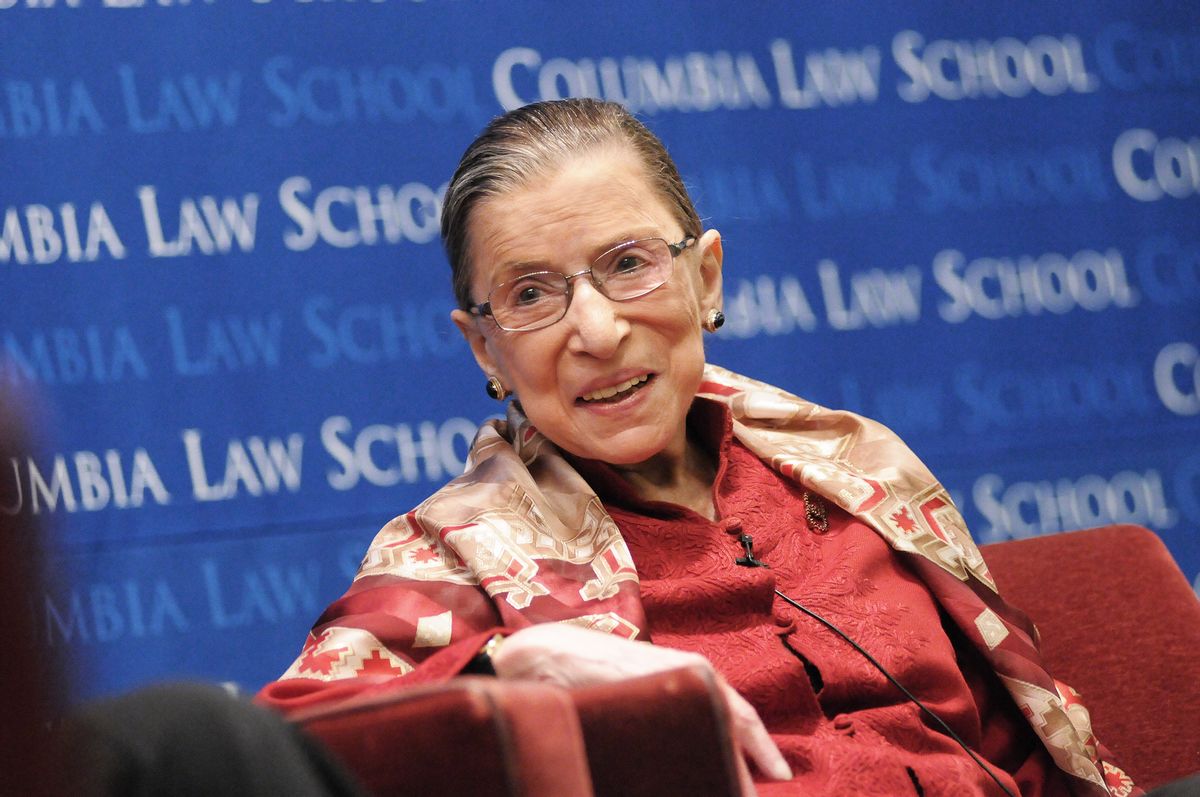 Last Friday, some of the most distinguished scholars and litigants working on gender and the law gathered to honor a foremother and inspiration, Ruth Bader Ginsburg, as Columbia University Law School marked the 40th anniversary of Ginsburg becoming the first tenured female professor there.

But there was another 40th anniversary as well, one less-known, but very much on Ginsburg's mind. It has been 40 years since she filed a brief before the Supreme Court for a case she wishes had established the abortion right instead of Roe v. Wade.

That was the case of Capt. Susan Struck, who had become pregnant in 1970. The Air Force demanded she either terminate the pregnancy -- abortions were being conducted on bases back then -- or leave her post. Struck, a Catholic, said she wouldn't have an abortion but would put the child up to adoption without taking off any unusual amount of medical leave. Though she lost both at the district court and the circuit-court level, she appealed to the Supreme Court, which agreed to hear her case until Solicitor General Erwin Griswold persuaded the Air Force to simply waive her discharge and change the rule. Ginsburg was disappointed.

"I thought if Susan’s case came first," she said -- before Roe, which would be heard a year later -- it would be preferable for the goals of women's equality, because "her choice was birth. Solicitor General Griswold saw to it that we did not have that opportunity." (This was the same Griswold who, as dean of Harvard Law School, asked the rare women in Ginsburg's class how they justified taking spots that should have gone to men. Ginsburg later transferred to Columbia Law School.)

Instead, it would be Roe that would invalidate state abortion bans, an outcome Ginsburg said not only "moved too far too fast" but failed to make a women's equality argument. "If you read the decision [in Roe], it’s as much about the doctor’s right to recommend to his patient what he thinks his patient needs. It’s always about the woman in consultation with her physician and not the woman standing alone in that case," she said.

Yale legal scholar Reva Siegel wrote in a recent essay celebrating Ginsburg's brief in the Struck case -- it was overlooked in part because she never got to argue it -- that "Ginsburg and the women’s movement talked about pregnancy discrimination in a way that ties together pregnancy discrimination and women’s equality, and women’s equality and reproductive freedom, before the Court split them apart in cases such as Roe v. Wade, Frontiero v. Richardson and Geduldig v. Aiello. The Court made some fateful choices in those cases: to focus its sex equality jurisprudence on cases other than pregnancy, and so to develop its sex equality jurisprudence in isolation from its abortion jurisprudence."

That was also true of many of the litigants at the time, Ginsburg said Friday, including the ACLU, which had been involved with Griswold vs. Connecticut, the case overturning a state contraceptive ban with a substantive due process argument that focused on privacy. Ginsburg preferred "women's change to chart their own life course," consistent with her idea that full citizenship meant the right to choose a life distinct from sex-role stereotypes.

But an abortion rights case involving a woman who wanted to choose to give birth would also have been consistent with the current reproductive justice framework, which is about bodily autonomy and a woman's right to moral dignity and self-determination. And Ginsburg, who brought several sex-discrimination cases with male plaintiffs, clearly understood the power of framing these choices with potentially surprising reversals that showed how traditional gender roles limited everyone.

It wasn't to be. Ginsburg called Struck to try and see if there was any way to press on with her case once the Air Force changed its policy. "'My dream is to be a pilot,' she said, but the Air Force doesn’t give flight training to women.' We both laughed because in 1972 that was an impossible dream. That’s one sign of how much things have changed."

During the question-and-answer portion, I asked Ginsburg about her comments last year that she likely couldn't be confirmed today because of her women's rights work. I asked if that made her concerned about the legacy on the bench of the issues she cared about.

"My dear husband once said that the symbol of the United States really isn’t the bald eagle," she said. "It’s the pendulum." She referred to contentious confirmations that preceded hers, and to the fact that despite being warned by the coaches for her confirmation hearings that she would have to answer for her ACLU work, it never came up. "The Senate was then determined to do it the way it should be done," she said. "I think my biggest champion on the Senate Judiciary Committee was Orrin Hatch." Justice Stephen Breyer, she pointed out, had a similarly uneventful confirmation hearing. "And then the divisiveness started up again."

"I’m hoping that a saner view will prevail and we will get back to the process the way it should be," she added. She didn't address the part about the legacy.