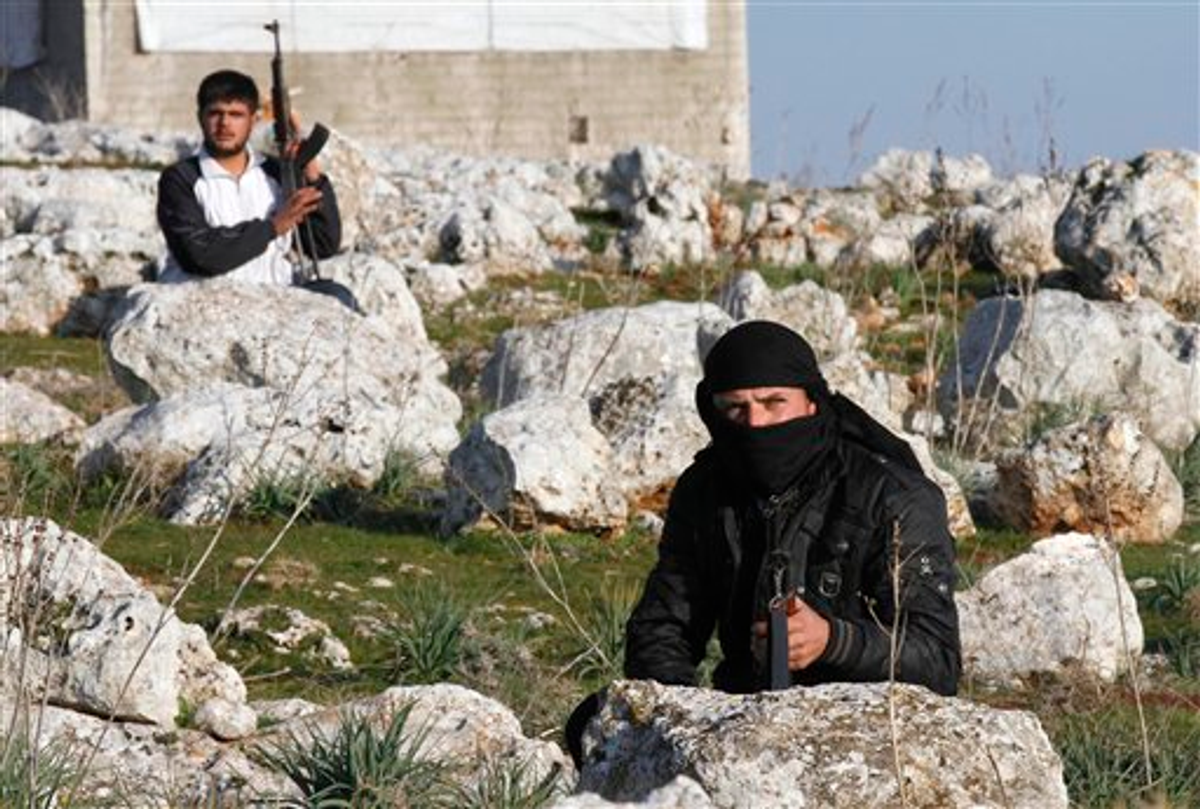 BEIRUT, Lebanon — Homs is now a war zone, a city under siege by the army of Syria's president, Bashar al-Assad. It is a city where rebel soldiers are being joined by jihadis to fight a guerrilla insurgency, and where once mixed communities have begun to split along religious lines as the seeds of a civil war take root.

"We're working by candlelight because there is no electricity and our generator is running out of fuel," a doctor known as Abdel Rizk from Homs' easterly Karm Zeitoun neighborhood told GlobalPost.

Trained as an anesthetist but lacking any serious painkillers, Abdel Rizk has morphed from a practitioner of the exact sciences into a battlefield surgeon of the most basic kind, completing multiple amputations in a day, using underwear to bandage wounds in the absence of gauze, and appealing desperately for help.

"We've got almost no medical supplies left," said the doctor, whose 15 patients, dying slowly in a single room of an old Syrian home, included two with serious chest wounds, five injured by mortars and three with amputated limbs.

"I was able to get a few stitches into the amputees, but they are going to die because we have no antibiotics or muscle relaxants," he said, speaking to GlobalPost using a satellite modem because all mobile and landlines have been cut, as has electricity to the neighborhood for the past two months.

"We are calling on the Red Cross or Red Crescent to come right away as the situation is intolerable. Today there was no bread. Children are dying."

Many in Homs fear a repeat of the massacre that took place exactly 30 years ago this month, when Assad’s father, Hafez, sent his artillery to pound neighboring Hama, another Sunni-majority city that dared to rise up against the oppressive rule of one family and a regime drawn largely from the minority Allawite sect, an off-shoot of Shiite Islam.

The 1982 assault on Hama, which was triggered by an armed insurgency by the Syrian Muslim Brotherhood, ended with Assad’s troops going house to house, killing, raping and looting, with an eventual death toll estimated between 20,000 and 30,000 people, the huge majority civilians.

Since the bombardment of Homs began on Feb. 3, activists estimate the death toll has exceeded 500 with more than 1,000 people injured. A researcher with the Syrian Network for Human Rights (SNHR), who has been traveling between neighborhoods in Homs, told GlobalPost that his group had counted 754 people killed, though accurate figures were impossible to verify.

Amid all the chaos, long dormant sectarian fault lines are beginning to open up, dividing neighbor from neighbor, Sunni from Allawite and opening a space for militants to operate freely.

In the Allawite neighborhood of Homs’ Nuzha district, a GlobalPost reporter met with Haidar, a successful 40-year-old lawyer, who is married to an Allawite school teacher and has two young boys.

Haidar and his family used to live in the Hamadieh area, a mix of Sunnis, Allawites and Christians. But after young Allawites volunteered or were paid to shoot and beat Sunni protesters alongside regular security forces, Haidar said he was “advised” by some of his Sunni neighbors to leave Hamadieh.

“President Assad and his father stacked the security forces with Allawites so now Sunnis see all Allawites as part of the killing machine,” Haidar said. “I understand their feelings, but what can I do?”

Haidar said he moved to Nuzha for “social protection from my community” and was now considering leaving Syria altogether for Qatar or another Gulf state.

“What is going on in Homs is a real civil war between the government and Allawites on one side and the Sunnis on the other,” Haidar said. “I don’t think we as Allawites have any future in Homs if the Assads go. We are shaking with fear for the future.”

Sectarian disintegration has also occurred the other way, with Sunnis, such as 25-year-old Firas, leaving Allawite neighborhoods. “I will be frank and say Homs is divided. There is no more national unity,” said the Sunni former resident of Haddarah who moved to the Sunni-majority neighborhood of Deir Baalbah. “The Assad regime created this sectarian war when it gave arms and money to young Allawites to attack us.”

In Homs’ Qusour neighborhood, home to about 35,000 people, an activist there said the majority of the one fifth Allawite population had moved away over the past six months.

“The pattern of sectarian consolidation that is taking place in central Syria and along the coastline has now spread to Damascus itself,” warned Peter Harling, the Damascus-based Syria Project Director at the International Crisis Group. “People are moving into homogenous neighborhoods, social ties are being cut, polarization is increasing.”

As communities divide along religious lines and the Allawite security forces continue to torture and kill Sunni civilians, forces long held in check by Syria’s secular system are emerging to stake a claim in an uprising many now fear is morphing into the nightmare of sectarian conflict suffered across the border in Iraq.

“I am not afraid to say that I support the opposition with money and weapons,” said Abu Annas al-Homsi, a Syrian Salafist fundamentalist who fought with Sunni militants against American-led troops in Iraq and who now leads Islamist militants fighting in Homs.

“The international community was too weak to protect civilians, so now we fight an open war to liberate our land and defend our religion.”

His call came just days after twin suicide car bombs killed 28 and injured 235 soldiers and security members in Aleppo, Syria's largest city, so far noted for its relative stability. The Free Syrian Army denied involvement in the attack and no group claimed responsibility.

State-run Syria TV — broadcasting images of destruction from Aleppo within minutes of the explosions while ignoring Homs completely — blamed "foreign terrorists." In Syria's tightly-controlled police state, however, such high-profile attacks by organized terrorist groups are extremely rare. Opposition members say the regime staged the explosions in an attempt to divert attention from its massacres in Homs.

A reporter working with GlobalPost who spent two days in Homs this week said the city reeked of corpses. Since the crackdown on the popular uprising against the Assad family’s 42-year dictatorship began last March, rights group Avaaz has confirmed more than 5,600 Syrians killed. Several other rights groups say that number could be higher. Tens of thousands have also been injured. The regime, meanwhile, says more than 2,000 members of its security forces have been killed battling "armed gangs and terrorists."

In interviews on satellite phones and with a reporter in Homs, residents said they were in shock. Many said they felt abandoned by the outside world after Russia and China vetoed a UN Security Council resolution that would have condemned the Assad regime and opened the door for possible sanctions and military intervention.

On Sunday, the Arab League said it would end its observer mission to Syria — widely criticized by the Syrian opposition for failing to protect civilians — and would ask the UN Security Council to send an international peace keeping force to end the bloodshed.

For now Homs continues to suffer bombardment from afar by artillery and rocket launchers. A GlobalPost reporter in the city witnessed scores of tanks and armored vehicles being deployed in Sunni-majority neighborhoods, with sandbags, checkpoints and soldiers around all buildings of the secret police and ruling Baath Party.

Activists in Baba Amr, the neighborhood that has been the hardest hit so far, said residents were now terrified that a ground assault was imminent with troops amassing on the area’s outskirts, while a reporter for Sky News who spent time in Homs last week said rebel fighters of the Free Syrian Army estimated a build up of about 10,000 troops outside the city.

Fighting with only Kalashnikovs and the occasional Rocket Propelled Grenade launcher, the defected soldiers and armed civilian volunteers of the Free Syrian Army (FSA) in Homs are severely outgunned.

But an FSA commander in Baba Amr told GlobalPost this weekend that his fighters had successfully repelled a ground assault against the city.

“They will enter only over our dead bodies,” said the rebel commander, known as Captain Ammar al-Wawi. “We destroyed four tanks when they tried to enter and we prepared a lot of surprises for the regime if they try to storm Homs. But we do not have a lot of weapons because no one is supporting us. We appeal to the international community to support the revolt in Homs because there is a massacre ongoing.”

Western powers have so far ruled out arming the FSA, as they did with Libya's rebel fighters, fearing such a move would hasten Syria's descent into civil war and concerned that neither the FSA nor the political opposition Syrian National Council are sufficiently united.

A GlobalPost journalist in Homs contributed reporting for this story.