Three great documentaries air, including "More Than A Month," where one filmmaker explores his conflicted feelings 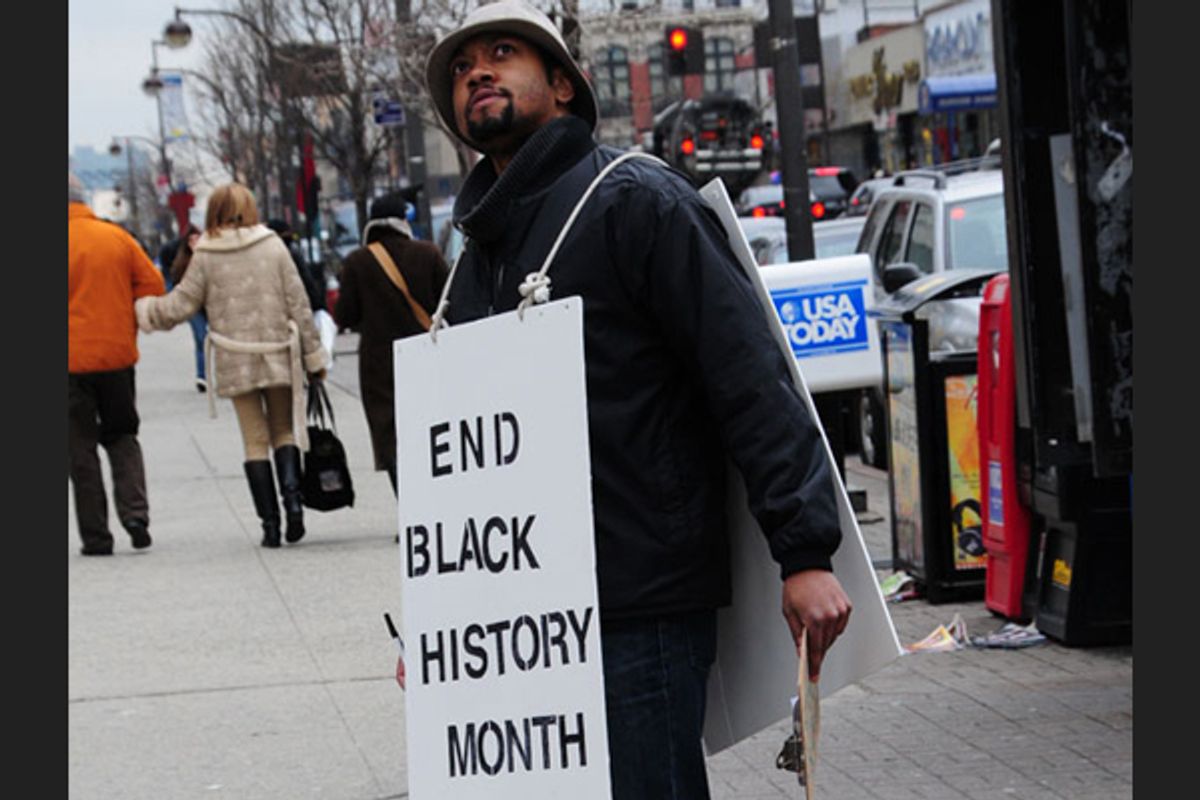 Black History Month is an idea that filmmaker Shukree Hassan Tilghman finds passé. In his documentary "More Than a Month," which premieres Thursday on PBS' "Independent Lens," he walks around with a signboard that says END BLACK HISTORY MONTH and receives plenty of dirty looks. But he also gets more support than he suspected -- after he explains that history should be part of the American story, told even during months with more than 28 or 29 days.

As he goes about his somewhat whimsical quest, some caution him that without that annual anchor, there’d be even less black history taught than before. He takes his campaign on the road; peers into the home of the month’s originator, Carter G. Woodson in Washington, D.C.; meets with the Association for the Study of African American Life and History; and goes to Virginia to see what black history means to big fans of the Confederacy.

Eventually he gets more serious about his task, realizing that while history may convey how we were, the way we tell history conveys how we are. And he’s had one direct effect: His mother, an activist, moves the date for a black history performance she had been planning out of February to help demonstrate that it is part of the fabric of U.S. history all year round.

One day, even television networks may spread their black-heritage documentaries beyond the confines of February as well. Unfortunately, two remarkable documentaries air at the same time Tuesday in many markets.

After demonstrating that he's a sensitive observer of life in black America with “Hoop Dreams,” Steve James is back with "The Interrupters" --  a more ambitious film that follows a fearless group of activists and amateur psychologists determined to end urban violence. It makes its national TV debut this evening on Frontline (check local listings).

That James and author Alex Kotlowitz (“There Are No Children Here”) decided to focus on Chicago at the precise time its youth-killing rates and lurid viral videos made it a national news story put them in the center of the cyclone. Their alarming footage, from the center of exploding violence and retribution, put the superficial approach of the national news media and government officials -- who did little more than hold press conferences -- to shame.

Even more remarkable are the counselors and community-minded people, many of whom learned their lessons in the streets, who put their lives on the line to defuse the mayhem out of a regard for love and doing what’s right.

Among them, Ameena Matthews deserves to be some kind of national heroine for her street sense, humor, decency, insight and bravery, which seem to change everyone she approaches. No matter how explosive the situation, she can enter, speak sensibly and have people listen.

James and Kotlowitz do treat their subjects seriously, listen to what they have to say and show how the activists are getting things done. For the inches of progress made before our eyes, it’s a hopeful film.

"The Loving Story,” on HBO, may seem like it is tied to Valentine’s Day. But it’s only providence that the couple at the center of the story is also named Loving.

But loving is the key. Richard Loving and Mildred Jeter were both members of a small community in Virginia where whites and blacks freely worked and socialized. They met and fell in love, and like anyone else might do, got married.

But there were laws in Virginia, as there were in more than a dozen other states, outlawing any such mixing of races through marriage, using a word that is as ugly as the prejudice, miscegenation.

Somebody called the cops and the happily married duo were hit with a felony charge in 1958 -- and a year in jail – which would be suspended if they’d just leave the state. Any visits back to see family or friends would have to be done individually, lest they risk arrest. They decided to fight the law, not only for their own sake, but as Mrs. Loving says in the sweetest possible way, for other people as well -- because “it isn’t right.”

“The Loving Story” is in some ways the exciting case of the two young American Civil Liberties Union lawyers who agreed to take the case on and brought it to the U.S. Supreme Court. But that’s only because lawyers like to talk, especially looking back at what they can now see was the biggest case of their lives. Although there is a surprising amount of footage of the Lovings in the film, they never do say very much. They just want the right thing done. And in the end, it is.

The two are not around to tell their story, though one of their daughters is. He died in a car accident in 1975; she in 2008 at 68, surrounded by family and friends.  The last anti-miscegenation law wasn’t repealed until 2000 in Alabama. Theirs is a love story that hasn’t been fully told previously -- and may not have had a showcase had it not been for Black History Month.