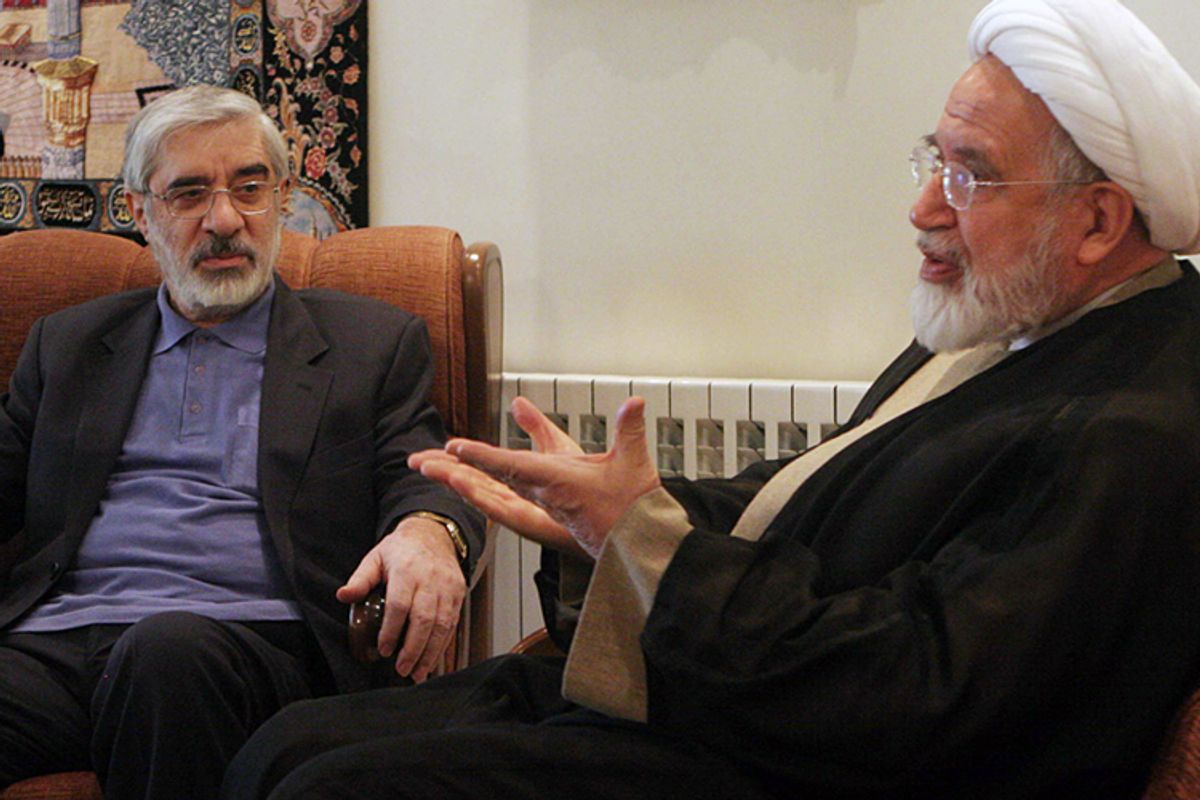 At 80 years of age, Ebrahim Yazdi has the distinction of being Iran’s oldest political prisoner. Yazdi was one of Ayatollah Ruhollah Khomeini’s closest confidants, accompanied him during his triumphant return to Tehran in February 1979, and briefly served as deputy prime minister and foreign minister. Authorities arrested him three times after the disputed 2009 presidential election for his membership in a political opposition group. Yazdi spent months in jail, then was released for medical treatment.

But on Dec. 28, 2011, a revolutionary court sentenced him to eight years in prison and a five-year ban from civic activities for “acting against the national security” and “publishing lies.” It is often said that “revolutions eat their children.” In the case of Iran, the Islamic Revolution of 1979 swallowed up some of its children whole, chewed and spit out the ones who strayed from the proper path, and mercilessly gnaws on those it cannot disown.

On Feb. 11, Iran’s rulers commemorated the 33rd anniversary of the day in 1979 that demonstrators and armed opposition groups, inspired and guided by Ayatollah Khomeini, seized control and the shah’s imperial regime ended. Back then, the revolution’s children rejoiced, and those who had taken the lead – the clergy, Islamist parties, secular leftists and workers’ groups, and members of the intelligentsia – began working toward establishing a new government. Many hoped it would represent the popular will and respect human rights.

Fast-forward 33 years. Today the Islamic Republic faces a crisis, with punishing economic sanctions and increasing isolation over its nuclear program. But Iran’s real crisis is within. It is a crisis of legitimacy, rooted in its systematic denial of basic human rights and dignity and the steadfast refusal of some of the revolution’s most faithful children to stay silent in the face of injustice.

Beginning in 1979, Ayatollah Khomeini, as supreme leader, initiated a methodical march to consolidate power and eliminate the opposition, especially secularists, leftists and reformers. Along the way, many, including some who had once been the revolution’s most ardent supporters, died in extrajudicial killings and from torture, withered away in prison following unfair trials, or were harassed and threatened out of politics. Ayatollah Ali Khamenei replaced Khomeini in 1989, but the revolution’s methodical march continued to roll back reforms made during the late '90s and to target reformist politicians like former President Mohammad Khatami.

Since its founding, the Islamic Republic has amassed an appalling human rights record. In the past year alone, prison authorities executed more than 600 people, including children. Security forces killed, beat, arrested and detained thousands of demonstrators demanding government accountability, reform and an end to discrimination against ethnic minorities. As of December, 42 journalists and bloggers were in prisons and detention facilities, according to the Committee to Protect Journalists, making Iran the largest prison for reporters in the world.

And that’s just a small sample.

Iranian officials have dismissively rejected criticism from human rights groups and the U.N. Earlier this month, Ayatollah Sadegh Larijani, the head of Iran’s judiciary, said it was a mistake for Iran to have agreed to the principles embodied in the Universal Declaration of Human Rights.

Feb. 14 will be another anniversary, a year since the government put three of the revolution’s most faithful promoters under house arrest: former Prime Minister Mir Hossein Mousavi; a former speaker of Iran’s parliament, Mehdi Karroubi; and Zahra Rahnavard, a renowned academic, political advisor and Mousavi’s wife. Authorities initially placed Karroubi’s wife, Fatemeh, under house arrest but later released her. Their families face constant harassment and intimidation.

Their crime? In June 2010, Mousavi issued the Green Charter, a manifesto documenting the guiding ideals and principles of the Green Movement, formed after the June 2009 presidential election, and its bold rejection of the current path of the Islamic Republic. The charter identifies “respect for human dignity and human rights” as a primary demand, along with self-determination in the form of free and fair elections. Then in February 2011, Mousavi and Karroubi called for Iranians to fill the streets in support of the Arab Spring, and demand their basic rights.

Thousands filled the streets of Iran’s major cities. Armed police, intelligence agents and paramilitaries were waiting for them. Clashes left at least three protesters dead, and hundreds were injured or detained.

Yet despite their circumstances, the detained leaders have continued to speak out. On Dec. 26, Fatemeh Karroubi relayed a message from her husband calling the upcoming parliamentary elections, scheduled for March 2, “a sham.” Several days later, the Iranian judiciary announced that any calls for a boycott of the elections constituted “a crime.” Authorities retaliated by preventing Karroubi’s family from visiting him.

Karroubi and Mousavi responded with another call for Iranians to fill the streets on Feb. 14.

On Feb. 4, 2009, less than four months before his first arrest, Yazdi spoke to a host on National Public Radio about the 30th anniversary of the Islamic Revolution. He ended his interview by saying that it was “unavoidable” that the “future belongs to democracy in Iran.”

Indeed, the Islamic Republic is facing an existential crisis. But at its very core, the crisis is less about the international power politics than about the irrepressible power of the revolution’s children demanding what they regard as rightfully theirs.