One day you're in

When Seal and Heidi Klum split, no one survives on the \"Project Runway\" set unless they get a little crazy 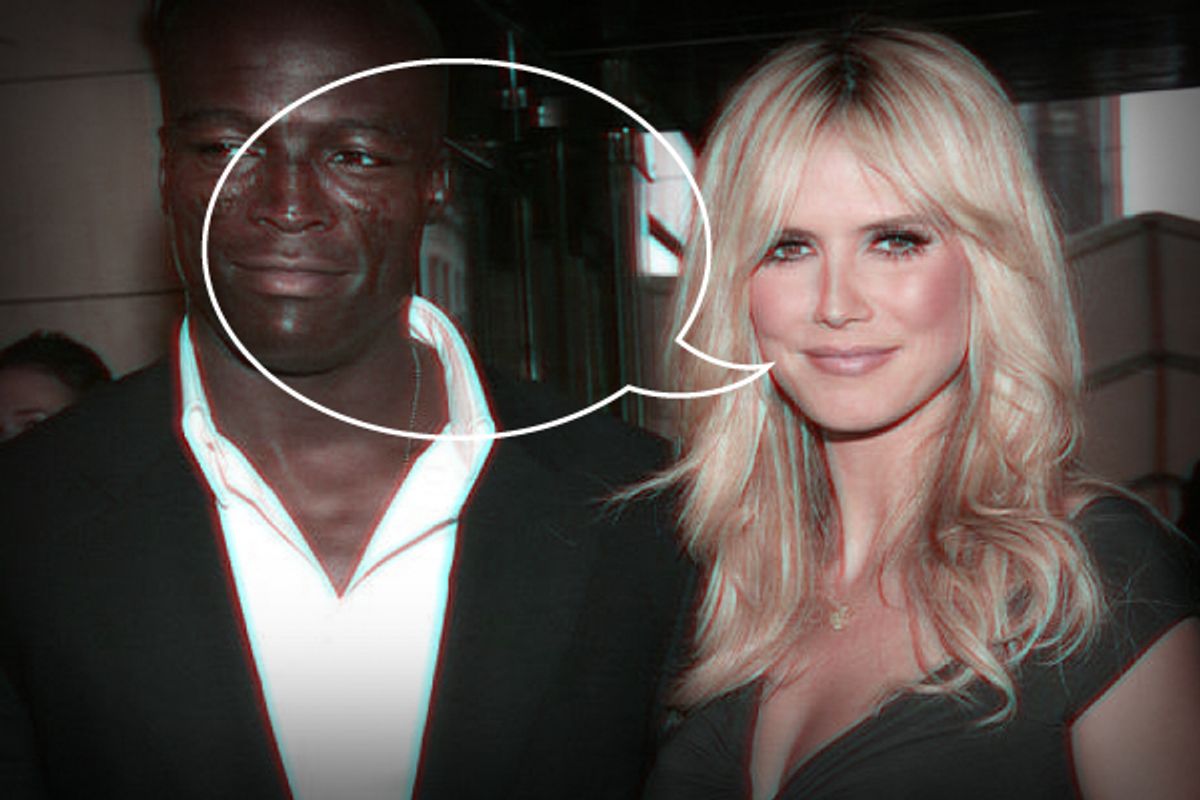 The old crew was back to work for the first time since Season 9 ended, and the new hires were cracking the “Make it work” jokes that the rest of us had gotten sick of five years ago. Even Tim seemed a little apologetic when he said it these days. He’d gotten too much sun the day before and was pinker than usual. “Just … make it work, I guess,” he told the makeup artist.

The casting episodes were always awkward, no proper sets or dressing rooms in the hotels and a desperate mass of humanity clutching garment bags in the hallways. And now everyone tiptoeing around Heidi, looking to see if she’d changed since the news broke, peering for bags under her eyes, or deepened lines around her mouth. If she looked older, she must be unhappy. If she didn’t, maybe the entire thing was a stunt to sell more albums. Women in this business are never just sad, they’re one step closer to the grave.

Some new intern had memorized Seal’s entire song catalog, and lobbed titles like little grenades. “‘Love Don’t Live Here Anymore,’” Raoul hissed to me, when Heidi got into a disagreement with Nina about a swimsuit with epaulets. “‘Back Stabbers,’” he said, when a PA told him to get off his ass and do some work. “‘I’ll Be Around,’” he whispered as he left, which turned out to be a track off "Soul 2," but I just thought he was telling me I could sneak out for a smoke break. I hadn’t listened to much Seal before I’d gotten this job. I hadn’t read Marie Claire, either. But I adapted.

Once Heidi was dressed, it was just hair and makeup that had to hover, who sleeked down her hair or redid eyeliner between takes. But today I didn’t want to leave. I stood around with my hands worrying the insides of my pockets, then invented a scuff on Tim’s left shoe, just to buff it away. He asked me what I’d been up to, during the hiatus. “You’re not wearing your necklace,” he said.

“Just time for a change. Besides, what kind of wardrobe stylist gets away with wearing the same necklace every day? I’m surprised Nina hasn’t had me fired, just for that.”

“I’d stand up for you,” he said. I straightened his tie. We both knew it was already straight.

That’s what Heidi had been saying, to the few people brave enough to ask. We didn’t want to embarrass ourselves by presuming any closeness. But if she wanted a shoulder to cry on, we all wanted it to be our shoulder. Women and men, gay and straight, we’d all watched her give kiss after kiss to the departing contestants and wondered if there were a way to make her notice us short of getting fired.

The overall feel of the room was as tense as the day Tim came back to work after announcing on his other makeover show that he hadn’t had sex in 29 years. I’d felt like I’d accidentally walked in on my parents, seen something that was natural enough but that you really didn’t want to think about. Something I didn’t feel I had any business knowing. It was a surprise and it wasn’t. A surprise, I guess, that he said it on television.

You don’t have to live this way, I wanted to tell them, but I guess some of them do. It wasn’t like Heidi could have taken off her ring and hoped no one noticed. I wondered if Tim ever missed his old life, writing curriculum proposals at Parsons. I wondered if Heidi ever imagined not entering that high school modeling competition in Germany. I wondered about how things would have been different if I’d never left Indiana.

Everyone has to decide. Models all decide early. They have to give it a go before anything else about themselves is formed, before their bodies are even settled. The ones who make it onto "Project Runway," whatever else they do later, they’ve done this, been on national television in some muslin and macaroni or hot pants made of pet store moss. Their boyfriends will come and go and when they watch Lifetime with some other woman, years from now, they’ll say, “I used to date that girl. The one in the sexy mailman uniform.”

I thought of Sam watching TV with his new wife in West Lafayette and telling her that the girl he was once engaged to left for New York to try and make it big. She never got in front of the camera, but she ended up holding some decent jobs behind it. In West Lafayette, that would count for something. “Oh my god,” she’d say. “Someone chooses those ridiculous outfits?”

I returned the ring, when I called it off. We didn’t have wedding bands yet. Didn’t even have a date set or a venue. Sam should have guessed, and I’d kept wishing he would. He hadn’t even looked for a job in New York, still waiting for me to fail so totally I’d come back, feel settled and satisfied in Indiana. We each thought we could wait the other out, but even when I couldn’t book modeling jobs, I couldn’t imagine going back home.

A rejected contestant was kneeling on the table, crying with his hands clutched in supplication, like Heidi was a merciful god. Security was circling, but they didn’t want to get too close and ruin the shot. Finally the poor guy left on his own, and an AD called a break. Heidi just sat back, didn’t get up and stretch. I tried to remember which shoes she was wearing, whether they were extremely uncomfortable or just moderately uncomfortable.

Raoul came back with a stack of cookies wrapped in a napkin from craft services. He offered me one, humming the chorus of “Kiss From a Rose.” I shook my head, and walked over to Heidi. I pretended to find a thread on her shoulder, pretended to pick it off.

“Don’t tell me that’s been there all morning,” she said.

“Nothing showed up on camera.” I stared at the part in her hair. “I have this,” I said. “You left it on the makeup counter. I didn’t want to leave it sitting out.”

I took her wedding band from my pocket and held it on my opened palm. All the previous seasons, she’d worn it to work and kept it on all day, whatever her outfit. I’d known without explanation that it was my job to accessorize around the ring.

She shifted in her seat. “I forgot about it,” she said. “I’ve been wearing it but then … I was just sitting in the makeup chair and I thought I should take it off. And then I was late to the set.”

A PA was gesturing me away from the table. The next round of auditions was about to start.

“I don’t have any pockets,” she said, looking down at her short aquamarine dress. She wasn’t accusatory, but of course I felt responsible. All the things I could not do for her, and I’d denied her even pockets. That, at least, I could have arranged. She had a broken heart and now no pockets even to stow it in.

“I have pockets.” I gestured down at my own outfit, plain jeans and flats.

Sam mailed the ring straight back. I want you to have it (and I can’t return it), he wrote. We were playing some game of hot potato, but I didn’t see any way to win. I put the ring on a gold necklace chain, and when people asked I said my fiancé had died. I didn’t get anything good this way. No jobs or dates or even free drinks — it just made people sad and uncomfortable. Tim had put his hands on my shoulders and pulled me close for a hug. But I’d kept saying it. It steeled my resolve. I’d told myself my life had to work out because I’d already given up so much. It just had to.

“Or give it to my assistant. She’ll put it in my room. She has the key.”

“OK. I can do that.” I wondered how long Heidi and Seal had tried to make things work just because they felt things had to. Because everyone would be talking about how they’d failed, and leaving notes on her website about how she should just have tried a little harder.

Michael Kors had to push past me to sit back down and he gave me the stink eye. I backed away as the cameras started taping. Raoul had finished the cookies and collected a handful of cheese cubes on toothpicks. He held them like a bouquet, offering me a blossom. “‘Let’s Stay Together,’” he sang.

I rolled the ring between my fingers, slipping it on and off the tips of my fingers.

I didn’t say anything. Heidi’s engagement ring had been a rock, but the wedding band was delicate, even thinner than it had looked on her long fingers.

“Which is weird. If it’s future, how are we ever supposed to get there? It’s a totally depressing song.”

During the hiatus I’d gone on vacation with one of the sound mixers. It was getting serious and I could tell the necklace creeped him out, so I’d left it at home. It was easier than I’d thought. I think I’d stopped wanting my life to be one specific thing. I wanted to write Sam to tell him this, that I was happy, that I hoped we both were, that I didn’t think we had anything to regret. I wished there was a way to share this with Heidi.

I figured I could at least say it to Raoul, give him some piece of wisdom he could take away from this job along with all the cheese he could fit in his maw. I tried to think of an appropriate Seal cover to sum up the situation, but “‘A Change Is Gonna Come’” was as close as I could get, and it just seemed obvious.

“Auf wiedersehen,” I said. “I need to find Heidi’s assistant.”

“Don’t let her hear you say that. I’m sure she’s got it copyrighted or something.”

“You can’t copyright ‘goodbye,’” I told him, which really could have been a song title of its own.

Caitlin Horrocks is the author of the story collection "This Is Not Your City" (Sarabande). Her fiction has been published by the New Yorker and in the 2011 edition of Best American Short Stories.