From the culture war to foreign policy, conservatives have been defeated on every front 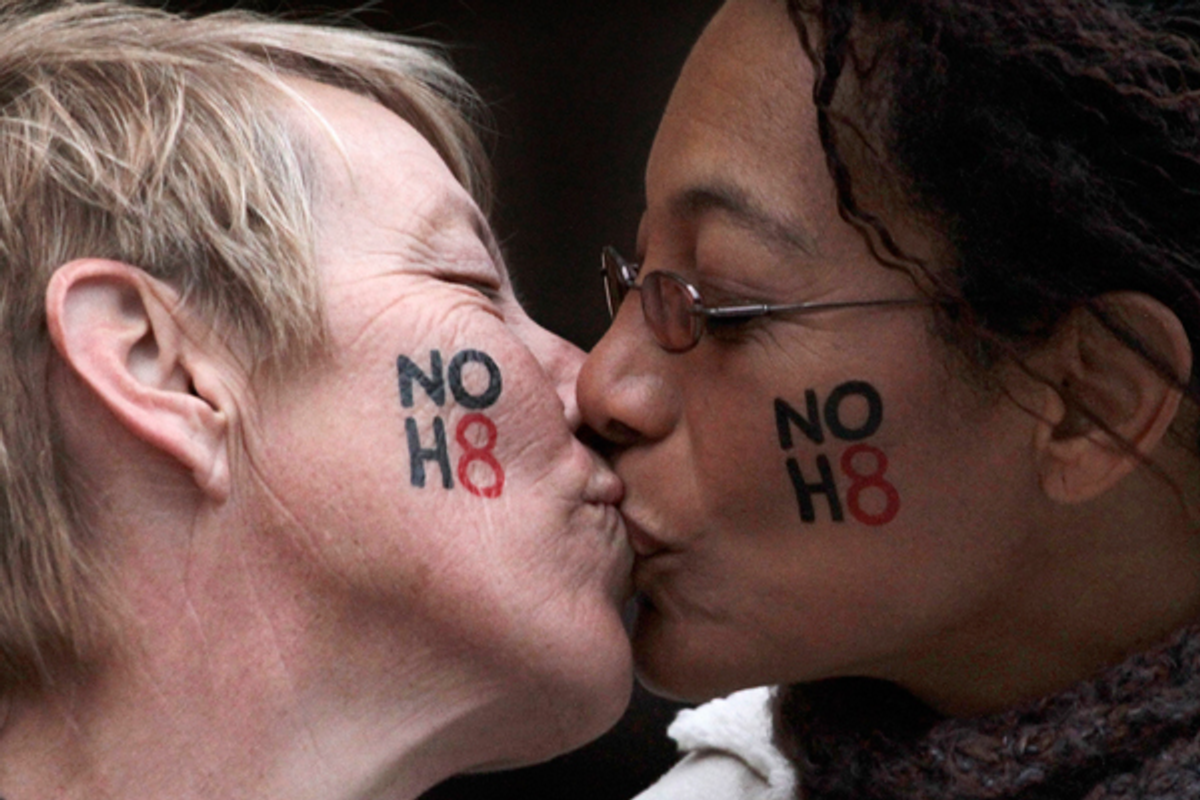 Lori Campbell (L) and Maja Roble, who are engaged, kiss at a celebration rally for Tuesday's ruling on Proposition 8 in West Hollywood, California February 7, 2012 (Reuters/Jonathan Alcorn)
--

American conservatives are deranged by anger — and why shouldn’t they be? For decades, they have been losing on multiple fronts. From the culture war to the welfare state to foreign policy, conservative initiatives have been rejected by the American people and repudiated by public policy. At most they have won a few battles while losing the war.

Consider what Pat Buchanan and other social conservatives called “the culture war” in the 1980s (after Bismarck’s Kulturkampf against the Catholic Church in 19th-century Imperial Germany). Even with a conservative majority on the Supreme Court, Roe v. Wade is in no danger of being overruled. The most that conservatives can do is back state-level initiatives like forcing pregnant women to view sonograms of fetuses — initiatives that are soon slapped down by the federal courts.

Gay rights? Since the 1970s and 1980s, when Miss America winner Anita Bryant led a nationwide crusade against gays and lesbians, public attitudes and public policies have been revolutionized. A center-right Supreme Court struck down state sodomy laws in Lawrence v. Texas (2003) and the ban against gay and lesbian soldiers in the U.S. military has been repealed. The push for gay marriage has provoked a backlash, but each generation of Americans is more tolerant than the older one. Now that Glenn Beck tells Bill O’Reilly that gay marriage doesn’t bother him, and O’Reilly defends the right of Ellen DeGeneres to represent J.C. Penney as a spokesperson, it is clear that, except for some mopping-up operations, this particular war is over and the liberal side has won.

Censorship? In the 1980s, Attorney General Ed Meese campaigned against pornography, symbolized by Playboy and Penthouse, and in the Clinton years Democrats supported the V-chip in televisions to allow parents to screen out smut. Now practically anything can be viewed on PCs and phones, and most award-winning dramas feature profanity and softcore sex scenes that would have provoked nationwide protests a few decades ago. This is a triumph for libertinism, if not liberalism.

Even as they have witnessed the collapse of their efforts to roll back the liberalization of laws governing sex and censorship, American conservatives have met defeat in their efforts to dismantle the middle-class welfare state created by Franklin Roosevelt’s New Deal and Lyndon Johnson’s Great Society. George W. Bush’s push to partly privatize Social Security was so unpopular that his own party distanced itself from it. Some on the right are still enthusiastic about replacing Medicare with a system of vouchers, but any serious attempt to do so would alienate many Tea Party supporters, who, according to polls, dislike government in general but support Social Security and Medicare. This contradiction was summed up in the Tea Party protester’s sign: “Get your government hands off my Medicare!”

Even the much less ambitious attempt to introduce school vouchers, a centerpiece of conservative policy efforts in the last quarter of the 20th century, was a miserable failure. Supported both by free-market libertarians and social conservatives who sent their children to religious schools, the voucher policy was pushed by right-wing think tanks and conservative donors like the late Theodore Forstmann, who grew rich by pioneering leveraged buyouts. It turned out that affluent white suburban voters tend to be satisfied with their neighborhood public schools and are not moved by appeals to the well-being of the poor inner-city youngsters who were drafted to serve as the poster children of this libertarian scheme.

To make matters worse, from a conservative perspective, the lawmakers whom the right elected to shrink the welfare state have steadily expanded it. Republicans as well as conservatives supported the expansion of the earned income tax credit, a subsidy to poor workers, and the child tax credit, a European-style childcare subsidy championed by Newt Gingrich, among others.

A Republican Congress passed, and George W. Bush signed, the law creating the Medicare prescription drug benefit, the biggest expansion of entitlements between the creation of Medicare and the Patient Protection and Affordable Care Act, or “Obamacare,” which itself was inspired in part by a Heritage Foundation plan as well as Republican Gov. Mitt Romney’s “Romneycare” in Massachusetts. The fact that many of these welfare state subsidies are delivered by means of tax credits, rather than directly, should fool nobody. These have been massive expansions of the middle-class welfare state.

In foreign policy, the neoconservative right appeared for a time to have prevailed. Beginning with the Clinton administration’s war in Kosovo, many neoliberal Democrats joined Republican hawks in celebrating global U.S. military hegemony and “liberal interventionism.” But the Bush administration overreached after 9/11 when it invaded Iraq shortly after it invaded Afghanistan. The costs of those two debacles quickly soured the public on “the war on terror.”

As early as 2006, when Robert Gates replaced Donald Rumsfeld as secretary of defense in the Bush administration, the U.S. began a course correction. Under Obama, the defense establishment has pivoted away from an emphasis on COIN or anti-jihadist counterinsurgency in countries like Iraq and Afghanistan toward “offshore balancing” against perceived traditional great-power threats like China in Asia. The Obama administration acquiesced quietly in the Iraqi government’s rejection of permanent U.S. bases in Iraq — a disastrous setback for the neocon dream of a U.S.-dominated Middle East. The withdrawal and demobilization of U.S. troops as the wars wind down will reduce U.S. military manpower by around 40 percent in the years ahead. Even in the brief, dubious NATO intervention in Libya, the administration chose to “lead from behind,” repudiating neoconservative triumphalism.

During the administrations of Clinton and George W. Bush, a few of us argued against neoconservative and neoliberal triumphalism, in favor of a more modest blend of liberal internationalism and realpolitik. Now we have it. Not only the war on terror, but also America’s post-Cold War flirtation with liberal imperialism, died with Osama bin Laden.

This is not to say that conservatives have not won some lesser victories in the last generation. But in most cases they did so only because centrist and liberal Democrats themselves were divided on the subject. The deregulation of utilities, transportation and finance from the 1970s through the 1990s was as much a project of Democrats like Ted Kennedy and Jimmy Carter and Bill Clinton as of Republicans. The repeal of the federal entitlement to welfare under Clinton was supported by Democrats as well as Republicans, because means-tested programs for the poor have always had less public support than universal programs like Social Security and Medicare. Cap-and-trade legislation, the Holy Grail of Greens on the left, was killed by coal-state Democrats, among others, after being subjected to persuasive criticism by a new generation of environmentalist thinkers like Michael Shellenberger and Ted Nordhaus of the Breakthrough Institute. Divides among Democrats have also doomed efforts to tilt federal law in favor of unions. The failure of grandiose visions of mass transit and high-speed rail owe less to partisanship than to their cost, their impracticability, and their lack of appeal outside of a small group of affluent white progressives in a few expensive coastal bohemian enclaves.

The only significant achievements that the right can claim on its own have been the tax cuts under Reagan and Bush. These have created an enduring gap between federal revenues and federal outlays, because Republicans themselves have been unwilling, when in power, to live up to their small-government rhetoric by slashing defense and middle-class entitlements. At some point, though, revenues will rise to match spending, as a result of the partial or complete expiration of the Bush tax cuts, higher tax rates, new taxes like a federal value-added tax, or inflation that produces “bracket creep,” pushing taxpayers into higher tax brackets. And when that happens, big taxation will pay for big government and the right will have nothing to show for its generation-long “starve-the-beast” strategy of cutting government by depriving it of revenue.

Don’t hold your breath waiting for liberals to admit that they are winning most of their battles. Particularly in an election year, partisans fear that complacency will lead to low turnout. And the single-issue movements of the left, no less than those of the right, depend on stoking anxiety in order to raise money and mobilize activists. So you can expect to hear that if the Republicans recapture the White House or Congress as a whole, we will see the return of criminalized back-alley abortions and racial segregation, while Social Security and Medicare might be abolished.

But the right isn’t going to repeal the great accomplishments of liberalism and remake America on the basis of sexual repression and censorship, free-market radicalism and American empire. Conservatives tried to do that and failed. No matter who wins this year, the right won’t get a second chance.