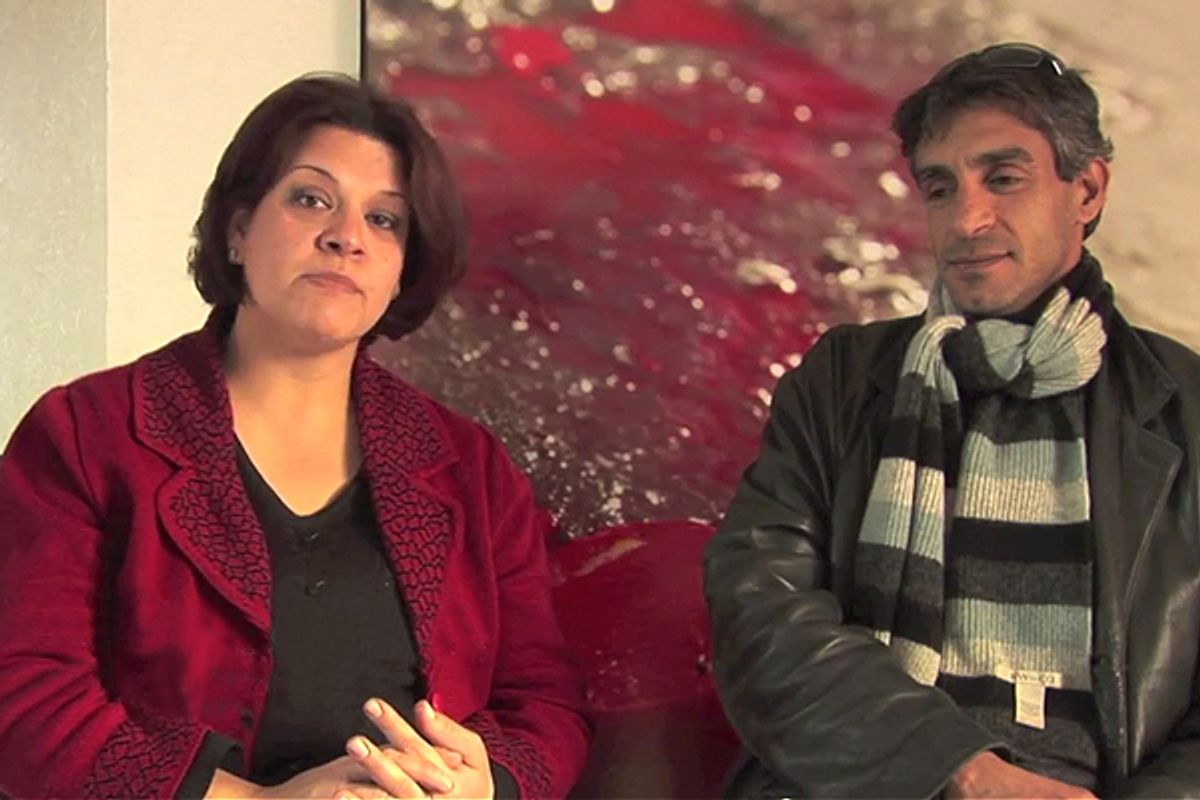 Taiseer Khatib and his wife, Lana
--

This Valentine’s Day, I live in fear of being separated from my wife by the force of the Israeli state and the whim of bureaucrats enforcing a discriminatory law that can separate Palestinian citizens of Israel from Palestinian spouses from the occupied West Bank. This fear will hang over us for years if the "Citizenship and Entry Into Israel Law" is not revoked as the state can use this law to separate me from my family.

Lana, my wife, is from Jenin in the Occupied Palestinian Territories.  She has a diploma in economics from Al-Najah University in Nablus. We met and fell in love in Jenin in late 2002 after Israel’s destruction of the Jenin refugee camp during the second intifada. She moved to Israel in 2005 to live with me. We now have two children, Adnan, who is 4 and a half years old and Yosra, who is 3 and a half years old.  My family means the world to me and yet our standing in Israel is extremely tenuous because of my ongoing failed effort to secure citizenship for my wife.

Despite the might of the Israeli government arrayed against us, Lana and I persevere because love is a force far more powerful than the state.  No matter the government responsible for repression, whether in apartheid South Africa, the Jim Crow South, or elsewhere, love has always been more powerful.  We knew the risks when we married after the law passed in 2003. But we were determined not to allow an apartheid state that discriminates against Palestinians on both sides of the Green Line to disrupt our love.

Lana’s residency has so far been possible only through yearly extensions of her permission to stay in Israel. Yet these have been entirely subject to the arbitrary discretion of Israel’s Interior Ministry and its security services. She has no legal or social rights, nor the possibility of obtaining health insurance or social security. She is not allowed to hold a job or drive a car. She is, by any fair reckoning, a third-class resident of Israel.

Lana used to be an independent woman – having worked for four years in the Palestinian Ministry of Health in Jenin – but today, in “modern” Israel, she is now totally dependent on me. Our home, rather than a haven, has become her prison.  She is stuck and there is no immediate prospect of release. This situation causes her and us permanent frustration. "I feel my freedom was stolen from me by this racist law," she says. "It doesn’t matter where you live, you are always controlled and denied rights by the state of Israel, [merely] because I am Palestinian.”

We are not alone. There are tens of thousands of other Palestinian families targeted by the so-called Citizenship Law.  Originally promulgated in 2003, it prohibits Palestinians without Israeli citizenship from joining their spouses in Israel or seeking eventual rights of residence. There is no comparable prohibition against family unification for non-Palestinian citizens of Israel, i.e., the country’s present-day Jewish majority.

The law explicitly discriminates on the basis of race.  Notwithstanding this fact, the Israeli Supreme Court of Justice earlier this year rejected a final appeal against the law. As a result, my wife could well be denied the right to live with me, a Palestinian with Israeli citizenship, and our two children in my hometown of Akka.

As many as 30,000 Palestinian-Israeli families (approximately 130,000 individuals) are under a similar threat of separation. On either side of Israel’s unilateral line of separation, many are already living apart from their spouses and children. They have no voice in Israel and face a Supreme Court that seems to think allowing them into Israel, and upholding human rights, is akin to “national suicide.” Israel’s nonstop security emphasis has turned all members of its Palestinian minority – and their spouses – into would-be security threats.  Of course, settlers who have repeatedly employed violence from Gaza (prior to September 2005) to the West Bank to Israel face no similar restrictions on their married lives. Violence against Palestinians counts very differently in Israel.

The recent Israeli Supreme Court decision means that Lana can no longer hope, however tenuously, to acquire citizenship, or even permanent residency.  In the best case, she might obtain further extensions of her present status. Meanwhile, the threat of those extensions being suspended will hang all the more ominously over us. Each time we go to the Interior Ministry to renew her permission, and each time Lana goes to renew her permission from the Israeli military administration near Jenin, we face the possibility of being told the permit will not be renewed due to security reasons or some other excuse. It is a dreadful climate in which to raise a family. There is no certainty and stress pervades our lives.

The would-be harmony of family life is further disrupted by the fact that we cannot choose to live in Jenin. According to laws introduced after the 1993 Oslo Accords, Israeli citizens are not allowed to live in or even visit Palestinian cities in Palestinian Authority-administered areas of the Occupied Territories. We, and tens of thousands of our compatriots, are caught in a truly Kafkaesque dilemma. The fear of being torn apart as a family has become a daily part of our lives.

While many of us have since childhood suffered discrimination, dispossession and violence at the hands of the Israeli state, and have watched with dismay as the international community fails to hear and address the difficulties of Israel’s non-Jewish minority, we see the new “Citizenship Law” as marking a particularly ominous regression for Israeli society. It is clear, and explicitly acknowledged in the Israeli public arena, that the purpose of this law is to further compound the difficulties confronting the country’s Palestinian minority, to make that community ever less viable, and ultimately to secure an Israel empty of Palestinians. In recent years, and especially in this current Knesset, more that 25 laws and law proposals were passed or advanced that discriminate against Palestinian citizens of Israel.  Many Palestinians affected are convinced that the law aims to make life so unbearable for families that they will permanently leave Israel.

Foreign Minister Avigdor Lieberman, who met last week with Secretary of State Hillary Clinton, is a proponent of the legislation.  So far as I know, Secretary Clinton said not one word to him on behalf of the Palestinian families negatively affected by the “Citizenship Law” Lieberman touts. Thanks to the American silence, the United States abdicates its position as self-described “leader of the free world.”

Lieberman, who is a staunch advocate for the ethnic transfer of Palestinians out of Israel, regularly employs language that reminds Israel’s Palestinian population of the climate of violence in which our parents and grandparents were evicted from their homes in 1948, while those who remained were reduced to clear minority status.  In fact, the “Citizenship Law” has been forced upon us by a Supreme Court put in place by an Israeli democracy that holds hegemony only because over 700,000 Palestinians were expelled and never allowed to return at the time of Israel’s creation in 1948.  Such is the reality of the Middle East’s self-proclaimed “only democracy.”  It is a democracy built on ethnic cleansing that to this day is pulling apart Palestinian families from either side of the Green Line.  Meanwhile, Jewish couples from inside Israel and the illegal settlements of the West Bank face no such fears.

This Valentine’s Day I hold little hope for a steady and certain future with my wife and children.  Even venturing to share our situation – and that of thousands of other couples – endangers my family by exposing us to the whim of that faceless bureaucrat who may consequently be leaned on by an elected official unhappy that Israel is being exposed for its discriminatory laws.

This is a far cry from the Israel that Prime Minister Netanyahu described last year to Congress.  In his make-believe Israel, the one delightedly indulged by an out-of-touch Congress, Palestinians enjoy full rights equal to those of Jewish Israelis.  This is a lie as the state’s discrimination against me and my family attests.

The United States has some experience with such laws through its own miscegenation laws of previous decades.  That American racism was best addressed by the civil rights movement and its success in guaranteeing equality for all citizens without regard to their race, religion or ethnicity.  On Valentine's Day it is long past time for Israel to address its own racism by promulgating similar laws that will promote the legal equality of Palestinians and Jews alike.

Taiseer Khatib is a Ph.D student in Anthropology at the University of Haifa and a teacher at Western Galilee College in northern Israel, Taiseer's story is part of a series called 'Love Under Apartheid' and available at www.loveunderapartheid.com.