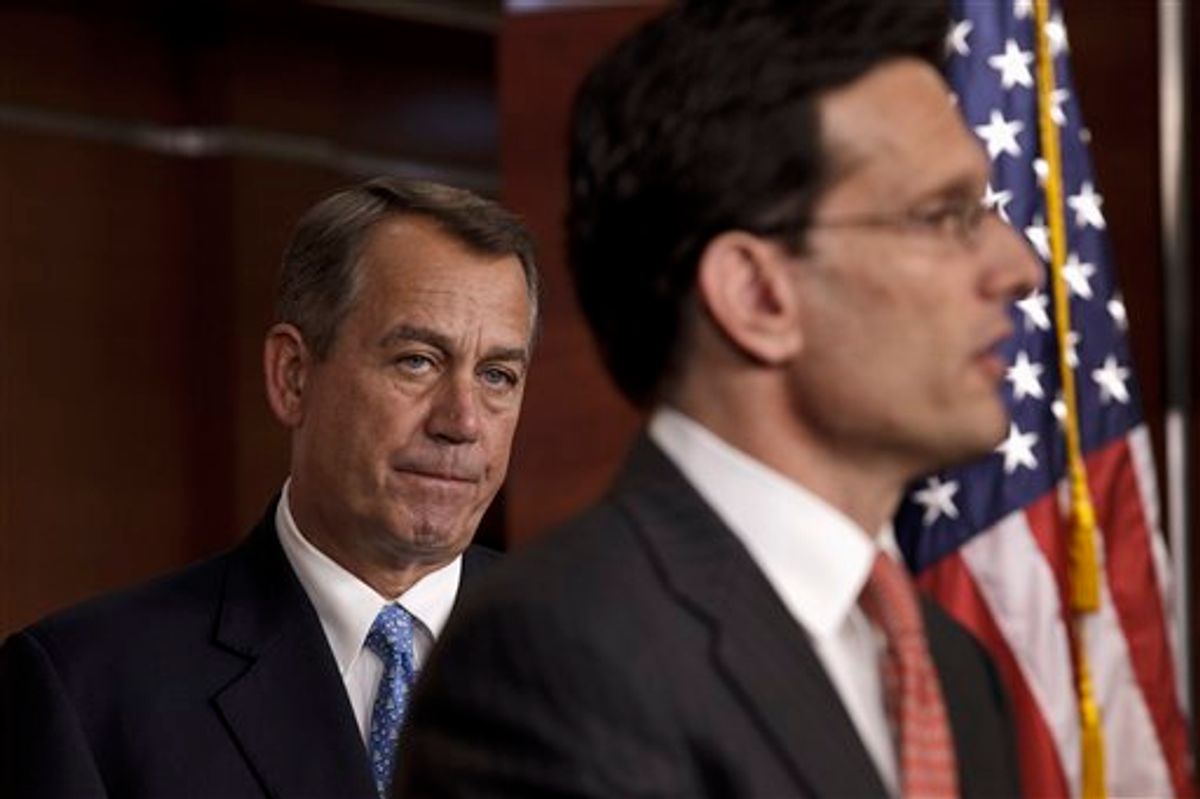 Since the 112th Congress was seated more than a year ago, the Republican House Conference has served as a generally reliable reflection of the Tea Party movement's passions and priorities. A significant chunk of its members -- mainly freshmen, but also some veterans -- are explicitly aligned with the movement, while those who aren't know better than to break too loudly or too publicly with it, lest they fall victim to a primary challenge.

This is why Speaker John Boehner, a Capitol Hill lifer whose political biography invites automatic Tea Party suspicion, has been repeatedly forced to subordinate his best judgment to the zeal of purity-obsessed rank-and-filers. And it's why Boehner's surprise decision yesterday to support a payroll tax cut extension even if it's not paid for represents a real gamble -- one that seems grounded in a reasonable calculation but that still has the potential to create another serious political mess for him and his party.

The political logic of his move is obvious: If an extension isn't implemented by the end of the month, tens of millions of middle-class Americans will face an election year tax increase -- one for which congressional Republicans, who've seen their poll numbers drop lower and lower with each showdown they've forced with President Obama, will likely take the blame. Given the relatively low cost of an extension, it hardly seems worth risking further damage to the GOP brand, especially since the party's hold on the House is somewhat tenuous.

But as the past 13 months have demonstrated, this sort of political logic doesn't tend to hold sway with the Tea Party crowd, which has convinced itself that rigid, compromise-averse devotion to ideological purity is the key to a sustained GOP revival. It helps that many of the true believers in the House come from safely Republican districts where there's little or no threat of a general election backlash. So the risk for Boehner is that Tea Party Republicans in the House -- and influential Tea Party leaders outside the House -- will deem his payroll tax move a sellout, since it would add to the deficit.

And by last night, there were some ominous signs for the speaker. As Politico reported:

The announcement shocked rank-and-file members, who were back in their House districts. Senate Republicans were likewise caught off guard — even one GOP leader who was trying to negotiate a compromise had no idea it was coming.

And conservative ire rose throughout the day, threatening to derail Speaker John Boehner’s plan to take the thorny issue off the table.

More than a half-dozen House Republicans, reached directly by POLITICO, declined to comment on the record about the decision, saying they wanted to hear the case from their leadership when they return Tuesday. GOP leadership said the decision to move forward with this plan depends on reaction from the rank and file.

The good news for Boehner is that he didn't make his announcement alone. Cantor, the ambitious majority leader, has a poisonous relationship with Boehner and is far more trusted by the Tea Party crowd, so it seems significant that he was willing to team up with him here. It could dissuade other conservatives from picking a fight, and it could also be a sign that the leadership has done its homework and determined that there's no real threat of another Tea Party uprising.
If the House GOP does go along with Boehner and Cantor, it would suggest that the December payroll tax battle really did rattle rank-and-file members, even those who spent 2011 demanding absolute purity -- that they are now more conscious of and responsive to the potential national impact of hard-line posturing. It would also suggest that Obama's improving political fortunes are having an effect. The question is whether this would have any broader implications. House Democrats are apparently hoping to roll a GOP payroll tax cave into other previously unimaginable concessions on extended unemployment benefits and a Medicare doc-fix. If they're able to do that, then what else that was impossible in 2011 might be possible in 2012?
If Boehner and Cantor prevail, it might also deflate (at least a little) one of the GOP's favorite anti-Obama talking points. After all, Republicans across the country spent most of yesterday decrying Obama's proposed budget for failing to tackle the deficit more aggressively. And yet, if they now sign off on the Boehner/Cantor plan, they'll be voting to increase the deficit.  What's more, as Jonathan Bernstein pointed out, they'll be doing so even though Democrats were willing to offset the expense by raising more revenue from the wealthy:

In other words, when push comes to shove, they’d much rather increase the federal budget deficit than to raise even a dime of taxes on wealthy Americans.

Look for Obama to point that out once or twice this year when Republicans attack him on the deficit.