It\'s the final phone conversation of Demi and Ashton\'s marriage and, wait, is that Rupert Murdoch listening in? 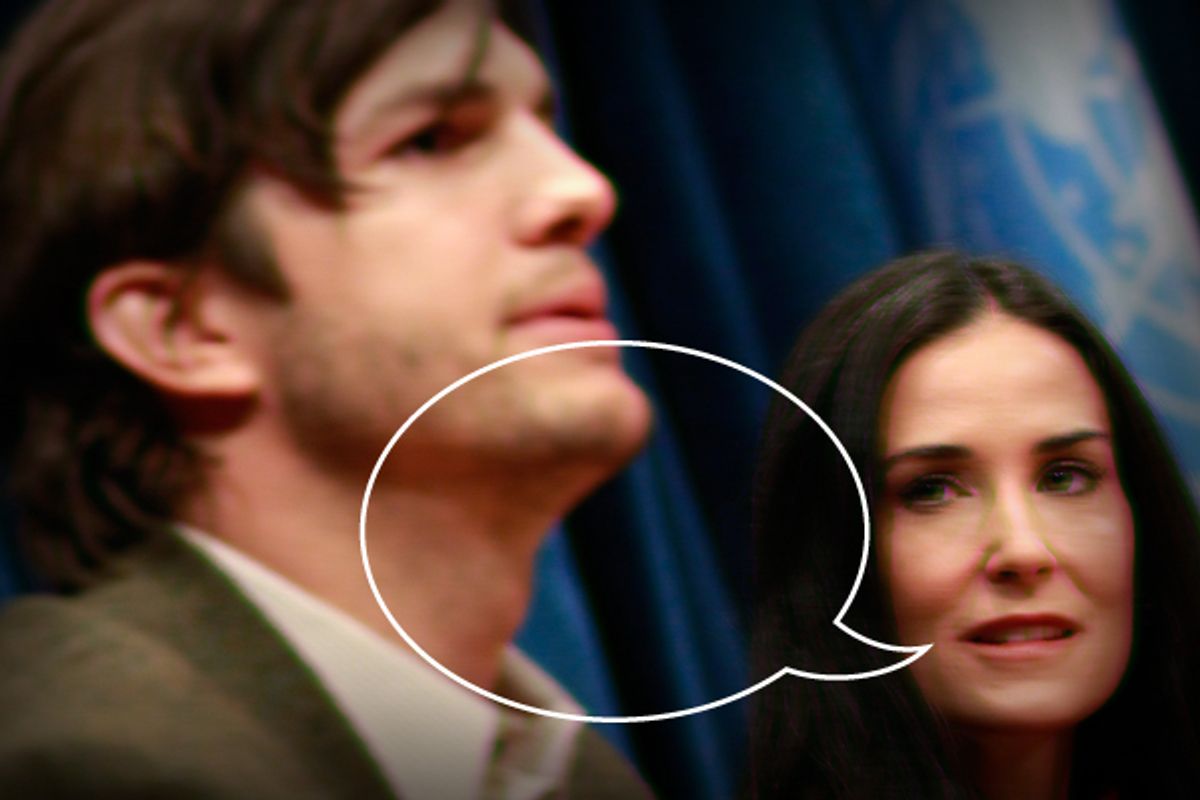 Demi Moore sits, distraught, on her living room floor. The house is in upheaval, every flat surface covered with boxes halfway packed, then abandoned; it seems her husband will never be done with moving out. A large bottle of Zyrtec is at her side. A dozen thin, high-strung dogs wander in and out of the room. Her cellphone rings.

Demi grabs one of the dogs with her free hand — it hardly struggles — and holds it closely, rubbing its silky fur against her cheek. How she loves these dogs: their dark, smooth coats, their effortlessly thin flanks. No matter how much she feeds them, she can still feel their ribs through their skin. Wonderful!

The dog nuzzles at her cardigan pocket, where she has taken to keeping treats for them: sinewy pieces of bison jerky, tiny sausage links, sliced-up organic hot dogs. The maid, shaking her head over the grease stains on her sweaters, suggested dog biscuits instead, but Demi has a horror of carbs. Besides, there is something strangely appealing about cutting up hot dogs. She holds out a nub, and the dog takes the treat delicately between its teeth.

“They say you’re holed up with whippets again.”

“Don't you have some strippers to ...” She sneezes three times, violently. “Some cameras to sell?”

“How many this time?”

“I don't know,” she says, looking around the roomful of dogs. “One or two. Maybe six.”

“Look, I know haven't exactly been a model of responsible behavior …”

“It's true,” she says. “You have not. You also have some packing up still to do. Your free weights … your grooming products … your glassware.”

Demi sets the phone in her lap and extends two thin, tawny arms. The dogs run to her, tumbling over each other just to lick her greasy fingers. She feels a pang in her chest. “When it's just me and the whippets,” she murmurs, “there’s no more pain.”

“This is front-page stuff!”

Demi picks up her phone again and holds it to her ear. “What did you say?”

“I didn’t say anything,” says Ashton.

“Someone with an Australian accent,” Demi says. “Is Hugh Jackman there with you?”

“Nope. Look, we may not be together anymore, but I care about you and your well-being.”

She hears this kind of talk every time he comes by to retrieve a stray video game or a favorite T-shirt; it never stops him from leaving just as quickly as he arrived. But the dogs, every one of them younger and more handsome than Ashton, never leave her side.

“I have something to tell you,” she says.

“Good. I’d like to hear it.” He sounds hopeful.

“If you want to take digital photos these days, you can just use your phone. Everyone knows that.”

She gathers another dog in her arms and rubs her face on its fur, inhaling. Her lungs constrict. With her free hand, she scrabbles for the Zyrtec bottle.

“You're huffing one of those whippets right now!”

“If you keep doing that, you're going to wind up in the emergency room!”

“You have your tech start-ups and your hot-tub whores and your four-megapixel paperweights. These whippets are all I've got!”

The dogs gather around her, first one at a time, then in a pack, whining, wagging their wiry tails. She realizes there is frying-pan grease in her hair. The dogs begin to lick her head.

“These whippets are messing with my head.”

The speedy dogs dart back and forth, licking Demi's hair, her face, her cellphone.

“The whippets are going to my head so fast!”

“What? You're breaking up!”

On the business end of an illegal wiretap, Rupert Murdoch is scribbling frantically. “Wendi!” he hisses. “Are you getting this?”

“This could be the scoop that causes the Daily to stop hemorrhaging money!”

Ashton is confused. “Is the Daily the same thing as the Daily Beast?”

Belle Boggs is the author of the story collection "Mattaponi Queen," which won the Bakeless Prize and the Library of Virginia Award.

Richard D. Allen is a poet and humorist.