Why everyone is still writing off Santorum

He’s taken the lead in three national polls, but there are four reasons why it might not last 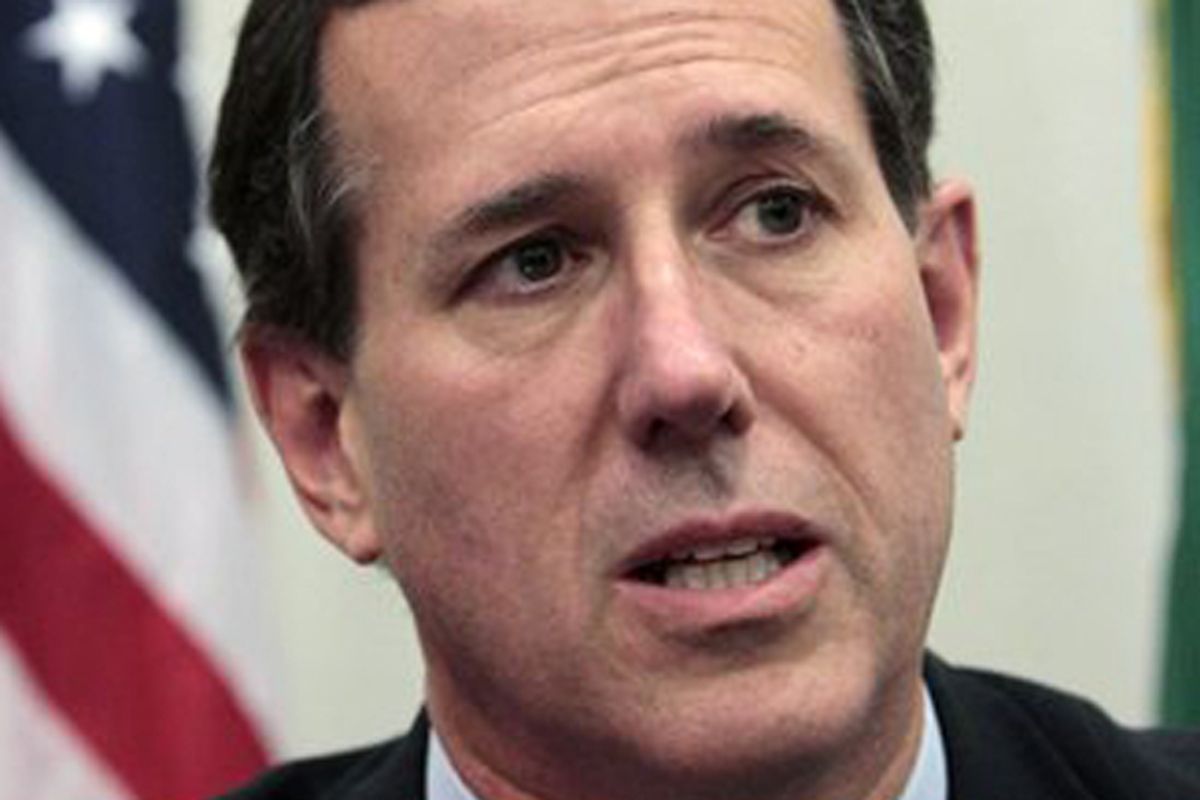 Rick Santorum has won four of the first nine Republican nominating contests, leads in three of the four most recent national polls, and has even pulled ahead of Mitt Romney in Michigan, Romney's native state. In so doing, he's turned what was supposed to be an easy month for Romney into a nightmare and drawn fresh attention to the party base's reluctance to get behind the former Massachusetts governor.

But the political world seems to be taking this all in stride. Sure, the newest poll numbers are dominating headlines, but the tone of the coverage suggests that Romney is still seen as the most likely nominee -- by far. For all of his woes, Romney is still given a 75 percent chance of winning the nomination by Intrade, with Santorum at just 16 percent. Four factors seem to be driving this conventional wisdom:

1. We've been here before: This is the most obvious reason, and it's been the defining story of the GOP race. One after another, we've seen Romney opponents suddenly rise from the back of the pack, vie with him for the lead, promise to unite the Mitt-phobic right, and then ... flame out. Significantly, Romney has never experienced the kind of crash that any of these challengers have; he's had trouble opening up a wide lead in national surveys, but he also seems incapable of falling much below 25 percent. So far, whenever they've been forced to focus, Republican voters have ultimately judged Romney's opponents more unacceptable than him. And when he has scored primary victories, he's seen his national numbers climb near 40 percent. He's almost broken away from the pack, in other words. So if past is prologue, Santorum's surge will prove fleeting, Romney will steady his ship, and we'll soon be back to talking about Romney's inevitability. And even if we then go through this cycle again, there'll still be reason it will end the way it always does, with Romney on top.

2. Money: Romney's campaign has more of it, and so does the super PAC that's aligned with him. A lot more of it. Restore our Future, the pro-Romney group, has now committed about $700,000 for television ads in Michigan through early next week, according to the New York Times. A lot more will undoubtedly come after that, since Michigan doesn't vote until February 28. Restore our Future is also investing in several southern states and in Ohio, where primaries will be held on March 6. Santorum just can't compete with this. Sure, he's been on a fund-raising tear since his three-state sweep last week and he has a super-wealthy ally bankrolling a friendly super PAC. But this is similar to what happened to Newt Gingrich a few weeks ago, when a South Carolina victory flooded his campaign with money and prompted Sheldon Adleson to write another $5 million check -- and it still wasn't nearly enough to compete with Romney in Florida.

3. Vicious attacks: They've become Romney's trademark and they go hand-in-hand with his massive bankroll, which can be spent on devastating negative ads as needed. Twice now, Romney and his super PAC have used this technique to combat Gingrich, once in Iowa back in December and again in Florida. And they're still not letting up on the former House speaker; many of the ads now airing in Michigan are aimed at him. It may be that the Romney forces simply haven't had time to create anti-Santorum spots yet; or maybe they just want to make sure Gingrich really is marginalized once and for all. Either way, it's hard to believe that similar attacks against Santorum -- who amassed ridiculous popularity in Colorado, Minnesota and Missouri by staying out of the Newt/Mitt sniping -- aren't coming. Romney has already begun trashing the former Pennsylvania senator in speeches and public events. And he's generally been effective at dismantling his opponents in debates, something he'll have an opportunity to do with Santorum next week.

4. Endorsements: As Jonathan Bernstein has been pointing out, Santorum's breakthrough last week -- like his breakthrough in Iowa back on January 3 -- has not resulted in a flood of endorsements from prominent conservatives, or even a trickle. Especially given the financial disparities at work, it's critical for Santorum to have loud, influential Republican opinion-shapers making his case and defending him against Romney's attacks. One of the reasons Gingrich was hurt so badly by Romney's Florida assault was that GOP elites mostly sat on their hands; they were secretly (or not so secretly) happy to see a candidate they saw as unelectable and unreliable cut down to size. The lack of support for Santorum now suggests that may hold similar reservations about him.

Of course, as I wrote last week, there's one key difference between Santorum and the others who've vied with Romney for the lead this year: He's a genuinely competent candidate. Not dazzling, but competent. He's in line with the party base on just about every key issue, doesn't have much personal baggage, can think on his feet in debates, and deliver a solid stump speech. This is more than can be said for Gingrich, Rick Perry and Herman Cain. This may be Santorum's best hope: that the desire of the party base to nominate someone other than Romney is so strong that this basic competency is enough to overcome all of the advantages that Romney still enjoys.