Why Ron Paul is still relevant 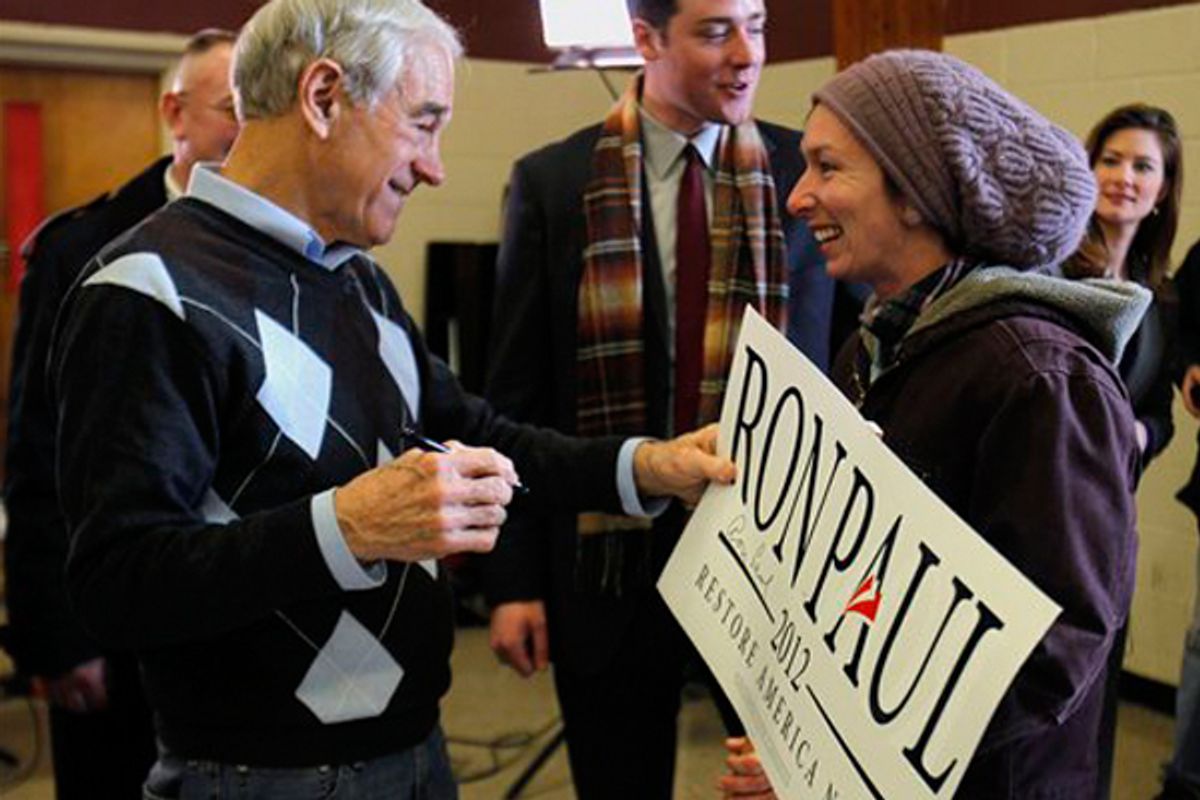 These are depressing days if, as I do, you don’t care much for Ron Paul.

His strong showing against Mitt Romney in Maine is further proof that the libertarian Texas congressman is not going away. So this is as good a time as any for those of us who view him as an off-the-charts extremist to come to grips with two larger questions presented by his candidacy: Why do so many people like this guy?

And even: Do Paul’s followers have a point?

My credentials in the anti-Paul camp are unassailable, and I have the hate mail to prove it. I haven’t changed my mind about his views. I still think that he’s a phony populist, because his positions would favor the 1 percent more than any other Republican candidate. I haven’t changed my mind that his “end the Fed” campaign is diversionary, and that his advocacy of the gold standard would put us in another Great Depression were it ever implemented. I’m concerned by the cult-like fervor of so many of his followers. I don’t buy his excuses for the racism that appears in newsletters that were published under his name.

But that doesn’t mean that those of us who aren’t won over by Paul should just dismiss the guy as a nut, which seems to be a popular practice in news organizations. I don’t think he’s been terribly forthcoming, especially on those newsletters, but you can’t deny that Paul has a number of positive qualities that moderates and liberals need to understand and appreciate, in order to effectively counter his views:

1.  He has integrity. I grimace as I write this, but it’s true. Perhaps not compared to Mother Teresa, but certainly he does when stacked up against pretty much any other politician I know, including more than a few Democrats. (He obviously has more integrity than Mitt Romney, but that’s not saying much.) His consistent dedication to the same ideals, the same causes — obsessions, actually — cannot be seriously disputed. A perusal of his books, House of Representatives floor speeches and miscellaneous bloviating over the years shows that the man has been hammering away at the same isolationist/monetary/no-government/”Constitution” themes for decades. He has opposed the war on drugs for decades, just as for years he has opposed the Civil Rights Act of 1964. Mind you, he’s not always internally consistent, in the sense that he takes positions that stray from the libertarian ideal: taking earmarks for his district and stridently opposing abortion. But on most issues you can expect that his rigidity on matters of ideology will shine through, no matter how politically inexpedient.

2. He’s likable. Paul doesn’t give off mean-S.O.B. vibes like Newt Gingrich. He’s rumpled, and walks with the head-forward bad posture of a slightly distracted junior college professor, shuffling along, late for his next class. He doesn’t make a big show of bullying debate moderators as Gingrich has been doing (though he has walked out on an interview). Though his positions are even more uncompassionately conservative than Romney's, he comes across with considerably more warmth (again, not saying much). His delivery on the stump is folksy, not fanatical. He talks about cutting $1 trillion out of the federal budget like your family doctor telling you he’s got to take out a gallstone. It’s good for you. It won’t hurt for long. Paul is often compared to the old man in the neighborhood who shoos the kids off his lawn, but he reminds me a lot more of Sen. Eugene McCarthy, the antiwar Democrat of the 1968 campaign. He doesn’t have McCarthy’s urbane wit, but that’s asking a bit much.

3. He’s smart, and in a nice way, unlike Gingrich or Romney. He doesn’t lecture; he doesn’t talk down to people. I think this explains a great deal of his appeal to the young. He’s this generation’s Mr. Wizard, the affable TV science teacher who taught baby boomers how refrigerators operate and how to get electricity out of a spool of wire and a magnet. Ron Paul’s Mr. Wizard character similarly reduces complex issues that people don’t understand into simple concepts amenable to simple solutions, such as abolishing a good part of the federal government and getting rid of the income tax. Yet he is able to embrace these off-the-charts positions in a manner that doesn’t make them seem extreme. It takes a genius to do that, and I don’t mean that in a nice way.

4. He knows the American people are fed up. He’s struck a chord with a lot of people I respect. His talk about American “empire” makes many a progressive feel warm and fuzzy. More than any other candidate — including President Obama — he understands how tired Americans are of being underemployed, exploited by the big banks and sent to engage in nation-building overseas. Sure, his policies would entirely wipe out regulation of banks, but he gets away with it from sheer force of personality. (And yes, I can already see the comments — the hedge fund managers and bankers support Romney. Sure they do: because he’s going to get the nomination.)

Paul’s views on foreign policy hearken back to the Republican isolationists of the 1930s, the Robert Tafts and Gerald Nyes, and he similarly taps into the latent Heartland “fortress America” mentality. He cannily exploits the paranoia that has long characterized American politics, and the deep-rooted dislike of foreign entanglements that has been dormant for decades. There’s an aroma of the old America First movement to much of what he says about foreign policy, and that’s scary to people who’ve read a lot about the 1930s, and know that we’d all be speaking German today if the Firsters had gained power. But they didn’t. Most people don’t give a hoot about what happened five years ago, much less 70.

5. He talks some sense. That’s what Paul haters have had a lot of trouble digesting: He’s an extremist on most issues who makes a lot of sense on foreign policy. He’s the only antiwar candidate in 2012. Even people who don’t agree with him totally on foreign policy have to admit that his opposition to the U.S. getting involved in Libya is looking smarter as every day passes, as do his views on staying out of the maelstrom in Syria. Sure, it’s insane for progressives to support a candidate who wants to turn back the clock on the New Deal and Great Society, as I pointed out a few weeks ago. But Paul has outsmarted us. He knows that dismay about Iraq and Afghanistan is strong enough to overcome any lingering doubts about his foreign policy views among a staggering number of people who’d otherwise find him repugnant.

The solution, I think, is the same one that applies to the spreading influence of another extremist who has gone mainstream, Ayn Rand. What’s needed is not shunning but debate, and an understanding that his positions need to be viewed as part of an organic whole. Anyone who reads "Atlas Shrugged"  knows that laissez-faire capitalism is just part of the Randian package. So are atheism and a lot of other concepts that people in the Tea Party don’t always recognize when they brandish those “Who is John Galt?” posters.

It’s the same with Ron Paul. If you swallow his foreign policy, you guzzle down laissez-faire capitalism as well, whether you like it or not. So, sure, he makes sense on Syria, but he has one of the worst records on the environment and global warming of any member of Congress. That’s just one part of the price tag. It’s a long list.

Politics is compromise, and so do the choices that voters have to make. Those of us who oppose Ron Paul believe that his positions are too extreme to warrant compromise. But we need to understand why so many reasonable people feel differently.