How to write about poor people

Katherine Boo on India's crushing poverty and corruption, laid out in her acclaimed "Behind the Beautiful Forevers" 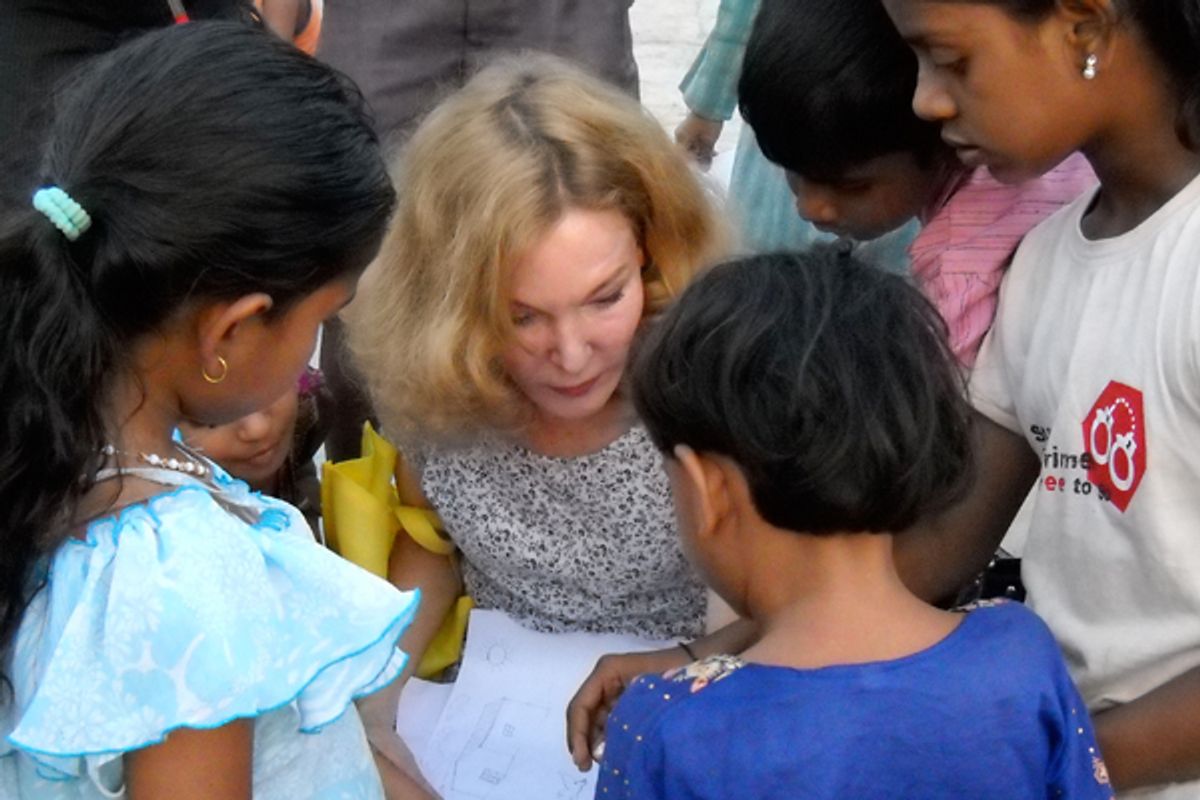 To say Katherine Boo writes humanely about poverty is an impossibly limited description. She writes about people -- oft-ignored people with whom she’s spent years, accruing thousands of documents and hours of footage. And somehow all of this research turns into an exquisite, seamless narrative, a feat made all the more difficult by the fact that the subjects of her first book, "Behind the Beautiful Forevers," the inhabitants of a Mumbai slum, speak languages she doesn’t know.

And yet even beyond the particularity of their stories, it's clear the teenage garbage collectors and would-be power brokers and brides all live within a hopelessly broken and corrupt system that crushes their aspirations daily, an unmistakable conclusion of the book. “I don’t really believe in the representative poor person as a construct,” Boo told me this week. “But even if every individual is anomalous in every class and every country, I hope there’s another way to read the book, looking at the way in which money that’s intended for schools and child laborers and girls gets diverted, or the realities of police brutality.”

It’s not as if the deprivation and violence of the community’s daily life is entirely invisible to either the Indian government or outsiders. It’s that webs of corruption are wrapped so thickly around anti-poverty efforts as to make them a joke to the intended beneficiaries. A nun who worked with Mother Teresa turns out children on the street and sells impoverished people the expired food donated by hotels to nourish them. Foreign journalists visit the Annawadi slum to see whether government-funded women’s self-help groups are empowering women, and one of the craftier characters, Asha, gathers “random female neighbors to smile demurely while the officials went on about how their collective had lifted them from poverty.” Asha announces that her daughter, who fears the marriage that her mother will arrange, won’t be “‘dependent on any man.' The foreign women always got emotional when she said this.” Boo doesn’t judge her: “For the poor of a country where corruption thieved a great deal of opportunity, corruption was one of the genuine opportunities that remained.”

Boo says now, “When we talk about accountability and implementation, even when I say those words, they’re just such eye-glazers. But that’s really what it’s about. It’s not that everybody in power wants to have a world in which somebody who is slowly dying on the road gets passed by. It’s that there’s so little work done to make (sure what) happens in Delhi or in Washington actually gets to the people it’s intended to. Whether it’s when I was reported on group homes for the developmentally disabled” -- the work that won her a Pulitzer -- “it was the same thing. The money just ended up circulating among the already privileged.”

But Boo is a reporter and a storyteller, and she doesn’t have a policy prescription, per se. She does believe that “statistics about the poor sometimes have a tenuous relationship to lived experience,” as she writes at the end of the book, adding, “I just believe that better arguments, maybe even better policies, get formulated when we know more about ordinary lives.”

Boo's husband is Indian, and he's the one who first suggested she turn her curiosity about poverty in booming India into a reporting project. She resisted, she writes in the book, out of fear for her ailing health and concern that she lacked the context or skills to write about India's poor. One night at home in Washington, D.C., "tripping over an unabridged dictionary, I found myself on the floor with a punctured lung and three broken ribs ... Having proved myself ill-suited to safe cohabitation with an unabridged dictionary, I had little to lose by pursuing my interests in another quarter -- a place beyond my so-called expertise, where the risk of failure would be great but the interactions somewhat more meaningful."

So she spent three years in Annawadi, interviewing and reinterviewing children and men and women with the help of a team of interpreters and a Flipcam. Of the interpreters, she says, "I had a bunch of false starts. People weren’t used to working in the style that I work, patient watching and listening. The days would feel pointless to other people, like, 'Why are we sitting here all day watching this kid sort garbage,' somebody might say. The conditions are bad." (One of the main geographical features of Annawadi is a giant sewage lake.)

She considered the first few months a write-off, except for the conversations she managed to witness. "The best material I got in the beginning was listening to people and tape recording and just collecting how people were to each other because that was their natural way, because they were still awkward with me and the whole translating thing," Boo says. "If I'd tried to do straight interviews at that point, it would have been so strange. I would have been sitting in a hut, asking someone questions with a hundred people outside the door trying to find out who I am and what I’m doing." Eventually, they got used to the sight of the delicate blond woman and stopped paying her much attention.

It's hard not to wonder anyway how much her presence might have put some people on notice or led the main players to see their lives differently. "There was a night when I was in the police station and they were beating the shit out a mentally disabled man," Boo replies. "And on the phone they were calling his brother in Hyderabad so he could hear his screams so he could help to secure his release financially. My presence didn’t put them on their best behavior." But she knows she couldn't help but change some things, even if it was just asking questions. Questions that, for example, could lead to realization that there's something wrong when the police don't investigate the murder of a child and document a demonstrably false cause of death.

"I could barely get out of bed at some points in the reporting," Boo admits. A friend who had worked as an investigative reporter and is now a novelist told her to pull up her socks and keep at it -- otherwise, almost no one would ever know about these wrongs. But Boo is also careful, almost to a fault, to not make the story about her. "I didn’t want it to be like, 'When I met Abdul …'” I want the readers to see it through his point of view, that he’s risen in an incredibly competitive group of [garbage] scavengers. I don’t want to be on every page instructing the reader what to think."

There's a risk to that as well, of course, the possible presumptuousness of inhabiting another person's head when they're not your novelistic creation. But Boo pulls it off, maybe because she's that good, or because she realizes that even the very poor "are neither mythic nor pathetic," nor very different from herself in ways that count. “When I’ve had hardships in my own life, it doesn’t make me a better or nobler person," she says. "Suffering doesn’t necessarily make people good in my experience."

When, during the years of reporting, she would tell better-off Indians what she was working on, "Many people felt like, Oh, we know. I was like, do you really know? Because sometimes saying you know is a way of not knowing." But now that the book is out, Boo has managed to get rapturous reviews from Indian critics who might be understandably skeptical of another Westerner explaining their country's ills to them.

“She has captured the spirit of colloquial Hindustani and Marathi without using an idiosyncratic idiom, and deftly negotiated distinctions of caste, class and religion," wrote one reviewer, Girish Shahane. "I am used to hearing false notes in depictions of Mumbai life; when they occur repeatedly, they undermine the authorial voice. The 250 plus pages of Behind the Beautiful Forevers contain no false notes.” One Indian interviewer, Anjali Puri, wrote, "All manner of 'India specialists' — journalists, sociologists, poverty-theorists, middle-class anti-corruption crusaders — may find themselves feeling inadequate by the time they have reached the end of" Boo's book.

The most interested parties in India -- the people featured in the book -- saw Boo herself visit a few weeks ago to hand out advance copies (in English, for now) and show the videos that will be part of the enhanced e-book. "It was emotional," Boo says of her return. "This is a very draining experience for many of them, particularly for people asked to relive some of the worst memories of their lives and to help me get it right." (She fact-checked the book herself, another reliving for her characters.)

And they'll have to live with what's revealed in the book, particularly because Boo makes a policy of using real names and emphasizing that this is not "tall tales from the under city," as she puts it. "One of the things that always troubled me is that you get to the end of a long piece and it would say, names and details have been changed. What details? Would you do that for rich people?"