Radical protesters are reborn as policy analysts; they tell the SEC to curb Wall Street speculators 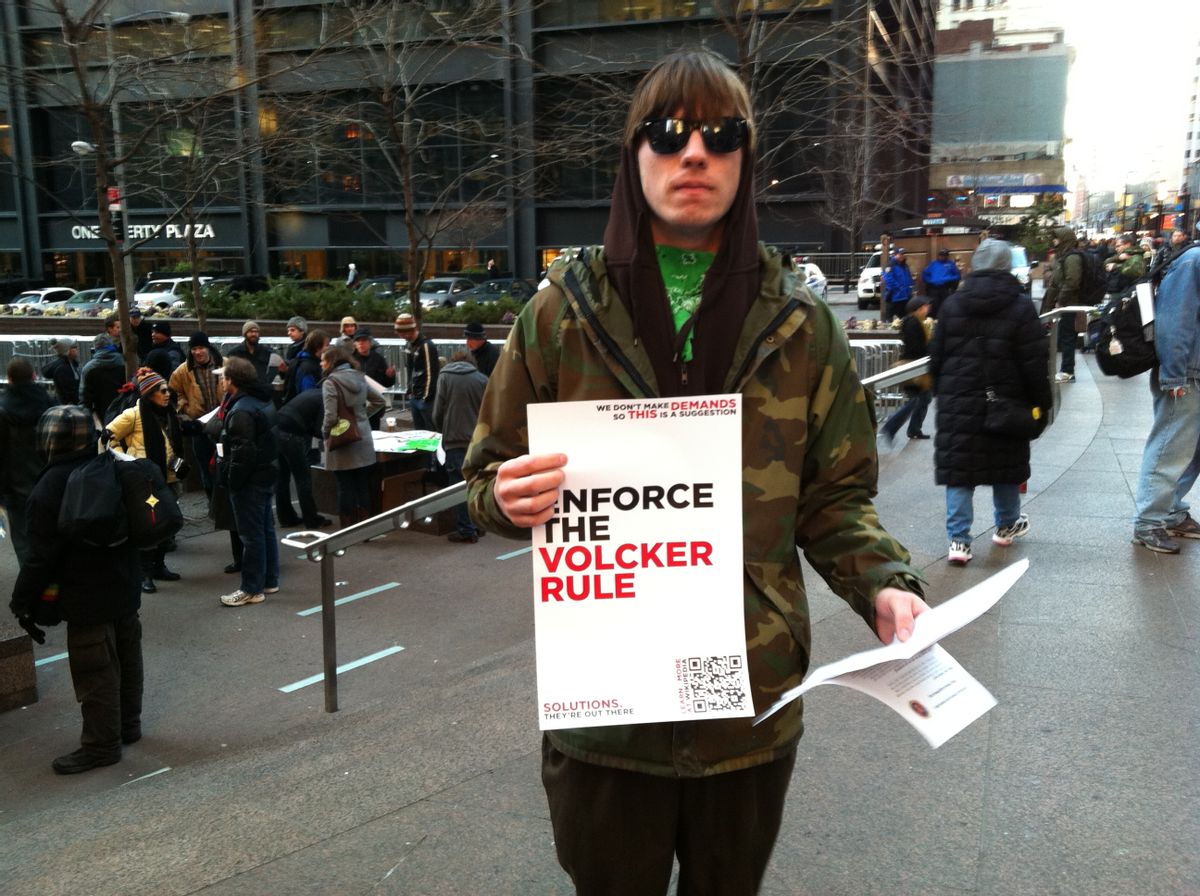 As the Occupy the SEC march made its way past the Goldman Sachs building in New York City on Monday night I looked up from the near-constant tweeting I do at these events just in time to see a man in a top-shelf suit rush past us holding a bottle of champagne. I imagined him looking at the 100-plus crowd of activists disrupting the walk to his luxury mid-size, pouting indignantly, “You’re gonna do this to a guy in a $4,000 suit? Come on!”

Occupy the SEC held the march to celebrate the release of its 325-page comment letter to the SEC calling for it to strengthen – and then, more important, enforce – the Volcker Rule, which will go into effect on July 21, 2012. According to Aaron Bornstein, who helped organize the march, Occupy the SEC’s comment is about twice the size of the next longest letter, drafted by the Securities Industry and Financial Markets Association, a financial interest lobbying group.

The working group's detailed policy position gives lie to the common claim that the Occupy Wall Street movement is "well intentioned but misinformed." It shows there's room in the movement both for policy wonks and those chanting "anti-capitalista."

The group was aimed to bolster one of the key reforms to emerge since the 2008 crash. The Volcker Rule (named after former Federal Reserve Board Chairman Paul Volcker)  is a subsection of the Dodd-Frank act, passed in 2010. Its purpose is to curb risky speculative trading by Wall Street investment firms. The regulations are set to be  finalized in mid-July. Until then well-paid lobbyists will do everything they can to create new loopholes that will enable the banks to engage in high-risk, high-reward speculation. Occupy the SEC seeks to block them.

“The main takeaway is the bank lobby is not the only player when it comes to influencing the regulators. There’s another side, and we’re trying to take that side,” said Akshat Tewary, an attorney, who helped draft the letter.

The SEC  is now bound to some combination of its initial draft and the comments it receives, explained Alexis Goldstein, who quit her Wall Street job last year. “They can’t add new stuff out of thin air; it has to come from comments. We’ve basically said the opposite of what the banks have said, from what I can tell so far.”

The action marks an unusual development for both the Occupy Wall Street movement and  the SEC. Unlike the Environmental Protection Agency, which gets comments from both industry and environmentalists, the SEC usually only hears from industry. The movement is bolstering the regulators, not bad-mouthing them. While the Occupy movement is often characterized by its disruptive street protests, it also includes a faction willing to dedicate untold hours of detailed policy analysis urging the SEC to do its job. That's a more full understanding of what the movement calls "diversity of tactics."

It’s hard to argue with Occupy the SEC’s recommendations. The Volcker Rule currently has an exemption for “repos,” which, Akshat tells me, is “basically a way to get funding at a very high leverage and very quickly.” Alexis describes repos like a pawn shop transaction. You sell your watch to the pawn shop for cash, but you plan on buying it back.

“So it’s technically a sale, but it’s treated as a way to finance things. Banks do this all the time, to finance things. And that would be fine if they were using Treasuries [i.e., U.S. Treasury bonds,  the definition of a safe bet], but they’re using these crappy assets. So they sell them, then they buy them back, and it’s all really short-term trading that happens with them. When people start to think the assets are bad they demand more collateral, and then other people hear that they’re in trouble so they start to demand more collateral and it becomes this death spiral.”

Repos are one of the reasons Lehman Brothers fell as swiftly as it did in 2008, and Occupy the SEC thinks that exempting them from the Volcker rule is a “terrible” idea.

They also want illiquid, over-the-counter financial products – like mortgage-backed securities – to be forbidden. As Alexis Goldstein puts it, “There’s a clause that says any high-risk asset shouldn’t be allowed by the rule, and we think over-the-counter illiquid assets are high risk.” The millions of Americans still suffering the effects of the Great Recession that began with the 2008 Wall Street crash  are likely to agree.

In addition to its attempt to directly influence the SEC, the group hopes to wage a broad educational campaign to teach the public about the financial industry. Occupy Wall Street has already successfully jammed early-stage class consciousness into the American zeitgeist. Occupy the SEC is hoping to build on that.

As one SEC occupier told me before the march, “One of the most exciting, surreal things about Occupy Wall Street so far is I have this sign that says, ‘Bring Back the Glass-Steagall Act,’ and if I just hold that on the subway, or on Broadway, you see people walking up to me every day, every single day I do it, someone walks up to me and says, ‘Yeah man, the Glass-Steagall Act.’ That would have been unthinkable four or five months ago.”