In his new TV ads, the Republican contender tries to be upbeat and nice, while splattering mud on Mitt 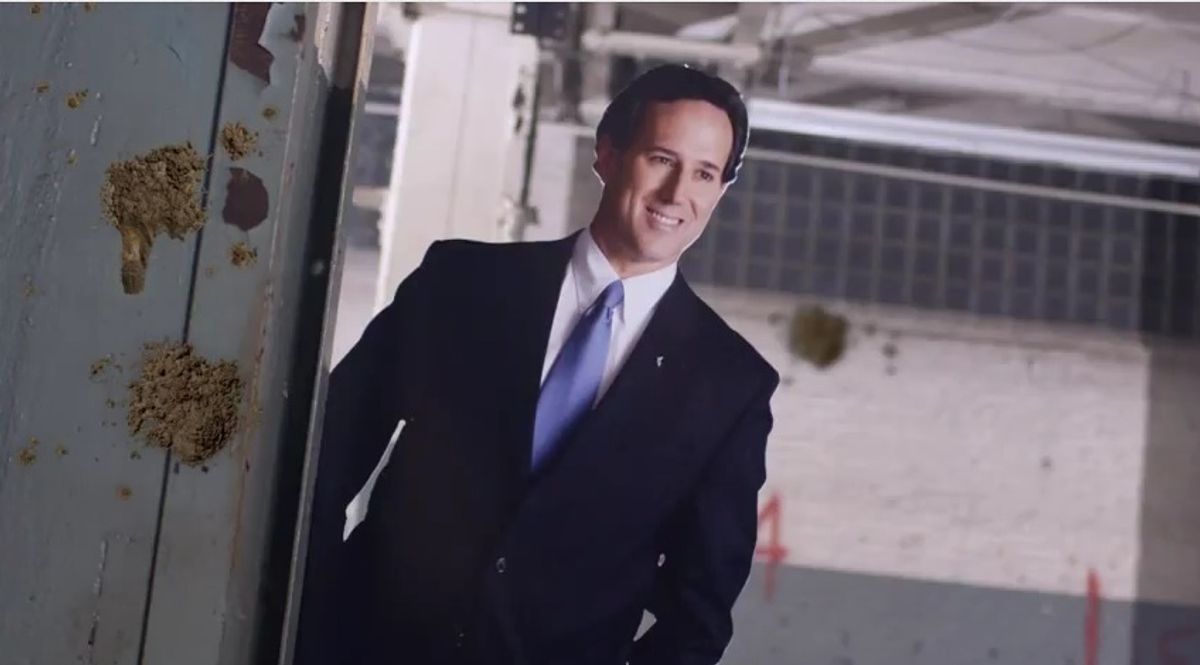 Rick Santorum is definitely going to be our next president, so we should probably get to know him a little better, as a country. Thankfully, he's introducing himself, with TV advertisements. (Or Web videos that might run on TV somewhere but are partially designed to garner free pickup from blogs and websites.)

Here is Santorum's "positive" ad, in which we learn that lots of people have said nice things about him in the past.

Mike Huckabee! Glenn Beck! Rush Limbaugh! That time Time magazine called him an "influential evangelical" even though he's a Catholic and therefore not actually an evangelical Christian! Sarah Palin! The Wall Street Journal!

I have a couple of thoughts on this.

First, those little tildes instead of em dashes for the quote attributions are bugging me. It makes all the quotes look like message board signatures. Second, the Santorum logo is pretty funny. The "O" sun that the eagle is blocking is too small or something, and it looks like this is an ad for Rick Sant Rum.

Also, obviously, if blurbs from Sarah Palin and Glenn Beck make you more inclined to support a candidate, you are basically the sort of person who sums up why America is broken and ungovernable.

Many of these positive quotes came from when Rick Santorum was a fringe candidate polling in the single digits, and they can best be understood as an attempt to be polite to the guy (Palin, a Gingrich enabler, is offering him faint praise here), or, alternately, attempts to damage Romney back when it was still possible for a new acceptable-to-the-elites candidate to enter the race (that was the point of the Journal's inexplicable attacks on Romney's perfectly supply-sidey tax plan). But none of that matters now! Rick Santorum will make everyone regret saying nice things about him back when they thought he'd go away after Iowa. (Except Glenn Beck, who probably does think Rick Santorum is likely the next George Washington, even though nothing about that makes any sort of sense, at all.)

Santorum will also maybe make Mitt Romney regret focusing all of his attention (money) on Newt Gingrich. Here's Santorum's other, better new ad, in which a creepy Romney lookalike (more a George Romney lookalike, actually?) shoots ... "mud" at a Rick Santorum Fathead in that abandoned building from the end of "The Departed."

George Romney looks so sad when he gets mud on his nice shirt, at the end! (He is also a horrible shot!) Also is Romney just doing target practice with these cutouts or is Santorum tricking him with decoys? It is not entirely clear. (And what does cap-and-trade have to do with anything?) But this ad is much better than the other one, because it is disgusting and odd instead of boring.

It is also, obviously, a negative attack ad attacking another candidate for airing negative attack ads, because an important aspect of the modern political campaign is constantly acting as wounded as possible for any reason at all while calling attention to your opponent's total lack of basic human decency. Santorum is adept at playing the aggrieved victim (Google and homosexuals are so mean to him!) though he's practically preempting Romney's actual attack on Santorum, which didn't really begin in earnest until, like, yesterday. Still, the important thing is that Santorum has reached the "hiring an impersonator of your opponent" stage, and there is no turning back now. (Next stop: comparing your opponent to a possessed sheep.)

At the National Review's Katrina Trinko points out, Santorum has bought $41,000 in airtime in Michigan, compared to Romney's $824,000. So Santorum needs the sillier gimmicky ads, like a Romney doppelganger firing a shit-rifle in a warehouse, to go "viral." (We're helping, Rick!) The best way to get free media pickup is to be extremely outrageous and/or shameless, so it's all downhill from here, in terms of tone. Especially because Santorum's lead is extremely precarious and based in large part on his not being Gingrich or Romney, both of whom voters now think of as detestable assholes, because of the ads they both ran against each other. (So be careful, Rick!)