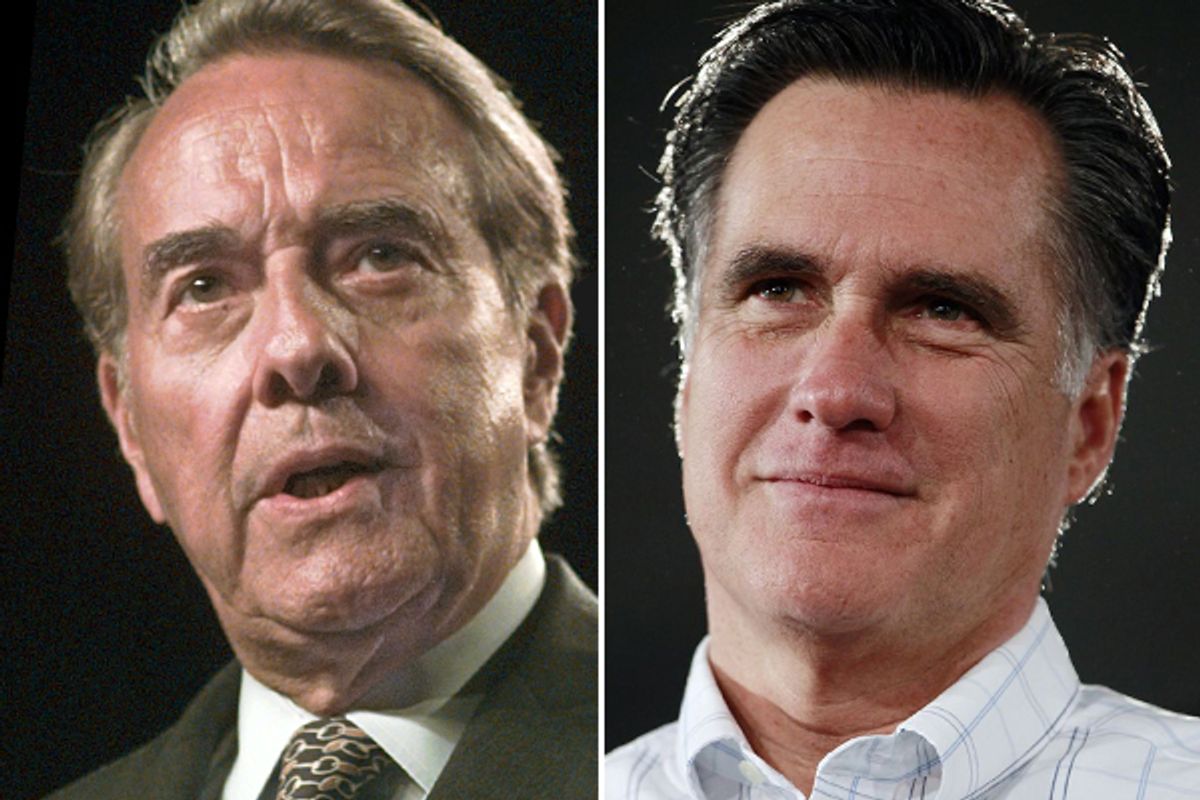 A flood of new data points to one clear conclusion: At least for now, President Obama and his Republican opponents are heading in opposite directions.

A CBS News/New York Times poll released last night puts Obama's approval rating at 50 percent -- his best performance in that survey since the spring of 2010 (not counting last May's brief bin Laden bounce). The poll also shows Obama enjoying his best score since the summer of '10 on his handling of the economy and his best score since at least late 2009 (when the question was first asked) on job creation, and finds voters more optimistic than they've been in nearly two years on the overall direction of the economy.

This comports with other recent surveys. According to RealClearPolitics' database, three polls released in the last two weeks have the president's job approval at or over 50 percent. Before this, you have to go all the way back to the very end of the bin Laden bounce, in mid-June, to find a single poll with Obama that high. (In that same span, three surveys put his approval rating below 40 percent.) The relationship between Obama's improving fortunes and the economic headlines of the past few months -- declining unemployment since last September punctuated by a jarringly strong  January jobs report -- seems undeniable.

But something else is happening too. Since the start of the year, the general election positioning of Obama's would-be Republican challengers has eroded as their intra-party fight has intensified.

Mitt Romney, who despite his latest crisis remains the favorite to capture the GOP nomination, was running 2 points ahead of Obama -- 47 to 45 percent -- in a CBS/NYT poll released just after New Year's, but he now trails by 6. In fact, Romney has run behind the president in every poll released this month, with RealClearPolitics pegging his average deficit at nearly 6 points. Romney's slippage is particularly pronounced among independent voters. A Pew poll earlier this week showed him 9 points behind Obama among them; three months ago, Romney led the same group by 12. Nor is Rick Santorum, the latest Consensus Romney Alternative to emerge in the GOP race, any better positioned. In the CBS/NYT poll, he loses to Obama by 8 points.

There is, to be sure, reason to take this all with a grain of salt. Primary seasons can be rough and candidates who end up performing well in the fall can look terribly vulnerable during their nomination campaigns; the story of Bill Clinton in 1992 comes to mind. And the encouraging economic news of the past few months could give way to demoralizing headlines in the months ahead, reversing Obama's polling gains and lowering his approval rating to crisis levels.

But the convergence of the best economic news of Obama's presidency with a messy GOP nominating contest also calls to mind the path that the last Democratic president took to reelection.

Like Obama, Bill Clinton began the 1996 cycle on the heels of an epic midterm election defeat and with the opposition party convinced it had found the formula to defeat him. But the Republican Party's image plunged in 1995 and early '96, the product of overreach by its new congressional majority and the toxic antics of a House speaker named Newt Gingrich, while the economy -- and Clinton's approval scores -- improved. By the time Bob Dole, who suffered an embarrassing series of early primary season defeats (including to Pat Buchanan in New Hampshire), finally secured the GOP nomination he was running far behind Clinton. And despite predictions throughout the spring of '96 that the race would ultimately tighten, it never really did.

After his defeat, Dole was known to lament that the election had come two years too late. Obama's recent gains are tenuous, but it seems a lot more likely now than it did a few months ago that the 2012 Republican nominee will end up saying the same thing.

I was on MSNBC's "The Last Word With Lawrence O'Donnell" last night and talked about Santorum's surge, Romney's struggles and Obama's good fortune. Here's the segment: