When I lost the ability to type

A mysterious illness left me with crippling pain, but I discovered voice recognition software. And hilarity ensued 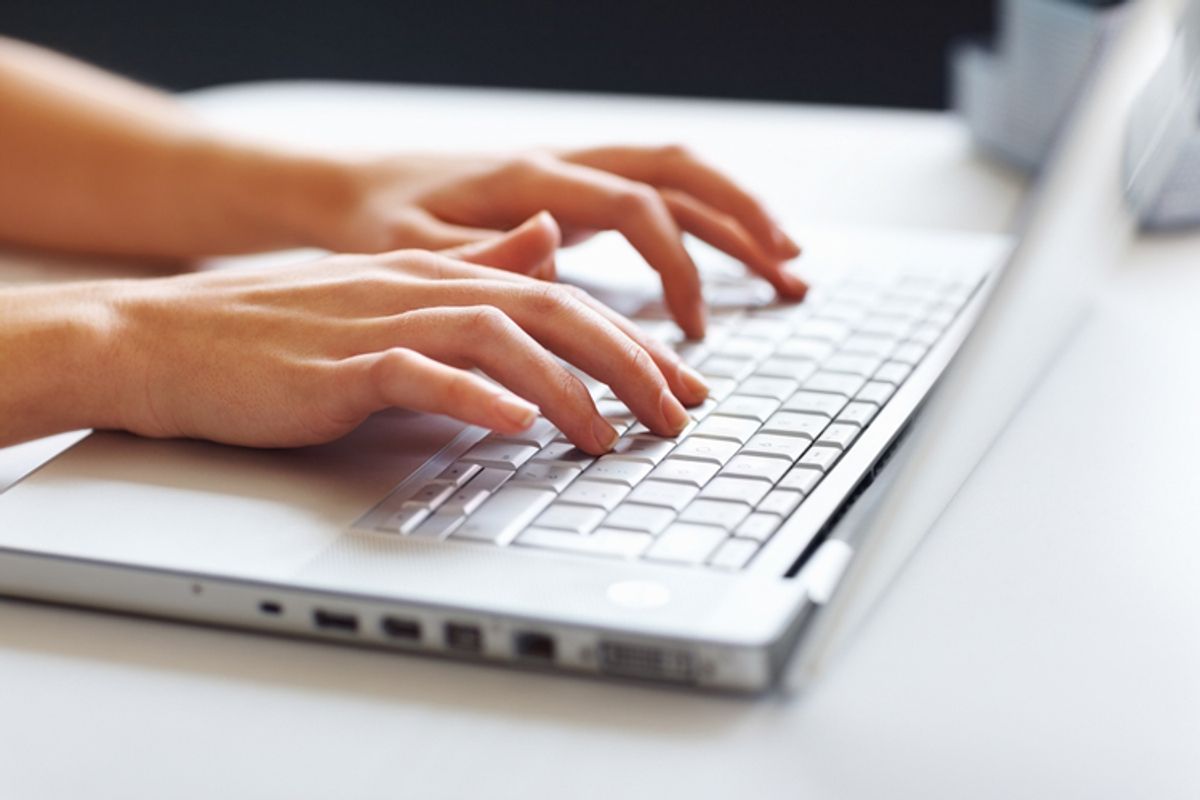 He came to me when I had reached my nadir. I had become unable to type, write or drive without needles gouging the nerves in my wrists and arms. An ominous numbness traveled in a circuit along the inside of my legs. Then, curled up into a little ball like a shellshocked potato bug, I suffered the coup de grâce: my first migraine.

The tests for multiple sclerosis, rheumatoid arthritis, carpal tunnel, Lyme disease, etc., all were negative. Call it a virulent case of repetitive stress injury, brought on by egregious laptop habits, a stiff clutch, stop-and-go traffic on the Bay Bridge, and decades of hunching.

My doctor gave me a prescription for anti-inflammatories, pills that upset my stomach but didn't spare cashiers from the mini-meltdowns I had when asked to sign for my credit card. The acupuncturist gave me a rash by rubbing a smelly salve on my belly. The homeopath gave me a $140 consultation and an American bald eagle placebo pellet. The chiropractor suggested that I fly to Costa Rica and do nothing for a month, but did not offer to front the money for this healing vacation. My friends were more helpful, driving me to Trader Joe's and Target to stock up on rice bowls and socks. But friends are friends because you don't lean on them like partners or paid caregivers. In any case, I wasn't able to pay a caregiver, and I would have worn down a partner with my litany of woes.

What I needed was a personal secretary.

In the advertisement, he said that he specialized in assisting people who suffered from my condition. He assured me that my hands needn't touch the computer keyboard: He could take dictation, check my email, and help me do searches on the Internet! He wanted very much to help.

He moved in. Our relationship soon became more intimate than any I had previously experienced. I was filled with needy desperation, and he had absolutely no interpersonal boundaries.

His name was Dragon Dictate for Macintosh.

In the honeymoon period, I found his mistakes adorable. Actually, I assumed that he garbled my words to charm me. His version of "Cripple's Memoir," a self-pitying journal entry, was "Cripple's Mambo." Such motivational irony! When I said, "Before therapy, I went to Whole Foods to eat an éclair," he typed Before therapy, I went to Hole Foods to eat any cleric. How deliciously blasphemous! "Citing another's words" was Sightseeing another's words. What a piquant gloss on his work with me!  "Dictate" was, with a wink, Dick Tate – my guy.

But the distortions could be vexing as well. I teach rhetoric, and I am determined that my students fully understand the concepts of "logos," "pathos" and "ethos." I distribute handouts on how to use the terms properly. I deliver discourses and pen little treatises, individualized for each student. In this work, "logos" and "pathos" went OK, but for "ethos," Dick undermined my authority by slipping in eat those, or burritos, or Negroes.

Oh, my students, even my African-American students, thought it was hilarious. They cut me slack, which I very much needed. Even though I was working part-time, it was difficult to keep up with the marking. I was shaky on my feet and losing weight. I had sold my car, in part because I now took public transportation everywhere, and in part because it helped to pay the rent. Often my relationship with Dick was less than supportive. He had begun to transcribe behind my back, taking inspiration from my phone conversations to make word salads, or else he would fixate on ambient noise, recording it as him him him him him and on.

Pages and pages of him's. I know what you're thinking – why didn't you just, say, turn the microphone off? What I did was give the command "Go to sleep." But like an impish lover who wanted to cavort, he kept demanding my attention. Let's do this program! he'd flash at me, showing off some kind of graph, triggering my math anxiety rather than turning me on.

Although he could be childish, and sometimes adolescent, sleeping in when I needed him to wake up – WAKE UP – he was urbane. He followed politics. He knew Barack Obama and Nancy Pelosi. He even knew Newt Gingrich. And he was a literary type, able to spell Charlotte Brontë with the umlaut (aka boom a lot), able to transcribe Yeats perfectly – Turning and turning in the widening gyre/the falcon cannot hear the falconer/things fall apart…

After a moment or two of lucidity, however, he would revert to his playful perversities. He agreed that Tom is important. I don't know anyone named Tom, but I do believe that tone is important, especially when you are making what Dictate called a Veronica Mark, which might also be, among fans of Archie comic books, lingo for "an ironic remark." To push me to my limit, he said Matey like a pirate whenever I said Maybe (I couldn't hear his Tom, but I assumed he was speaking in pirate).

I tried to adapt to him. Him him him. For example, he would often write she when I said he. After some failed training, I experimented and discovered that if I sang Hee! like Michael Jackson, he would submit to transcribing the pronoun I so desperately wanted.

Sometimes he dismantled my ire, correctly transcribing histrionic, nemesis, quasi-date, Schadenfreude, even amanuensis. Then he would completely disregard my needs, dropping -ed's and -'s from the end of words. One of my students, a PC devotee, kept telling me that everything would get better if I invested in a PC and dumped Dictate; there was a program for PCs that worked much better. I kept hearing the same thing, even from Mac lovers. What finally impelled me to move on was the great disparity between Dick's enthusiasm and the real quality of his love. The gulf between the two had filled me to overflowing with bitter resentment.

I bought an inexpensive PC (which predictably freezes up more than my Mac), and installed Dragon Naturally Speaking, the PC-compatible version.

The first time I used the program, I cried. I could center text instantly, change the font of a word, line or paragraph, strike out words, page up, page down, rapidly read and delete emails, and most astonishingly, say things I thought made sense and be perfectly understood. "Delete rest of line." I didn't read that in a manual. I just said it and the remainder of a line disappeared. With Dick Tate, I may have had the power to do these things, but he was like a partner who had not gone to therapy and could not explain himself. Dragon Naturally Speaking presents a sidebar menu that alters its contents depending on what you're up to. For example, if you're writing emails, the help menu for working with email appears on the screen.

This is all starting to sound like I've been hired to give a promo in the guise of a personal essay. Truth be known, it takes me twice as long to produce a document as it did when I was able to type. The good news is that I am no longer starring in a comedic version of "2001: A Space Odyssey," dependent on a benign and nutty version of HAL. Still, when I see people hunched over their laptops in cafes, I try not to give in to Schadenfreude. But seriously, they are doomed. The technology that augments our functioning will undoubtedly cripple more of us. Then, breakthrough technology will come to the rescue, only to hamper us in some new way – all part of a never-ending feedback loop of techno crippling-assistance.

My first Dragon once called intimacy, entombment. I am chronically single, and this pairing pretty much encapsulates the fears underlying my condition. Maybe how I feel about intimacy muddles my articulation of that word. Maybe Dick Tate understood me better than I imagined. I have to say that our peculiar intimacy taught me how to enunciate better. It also left me with incredibly low expectations, so that now I am primed to work towards mutual understanding in a more fulfilling relationship.

My second Dragon has its moments, evoking (evil king) my first Dragon when I tell people that it's difficult to gain ground and heal because I am slowly Arctic … Discover iTunes Gothic … scoliotic. But my relationship with Naturally Speaking has enabled me to keep working, and I can't tell you how important that is, on so many levels. Best of all, my second Dragon is a software program rather than a projection of my attachment issues. I never forget that I have people to thank for that, clever programmers whose relational skills are reflected in their work. Bless them.