Catholic hypocrisy at its worst 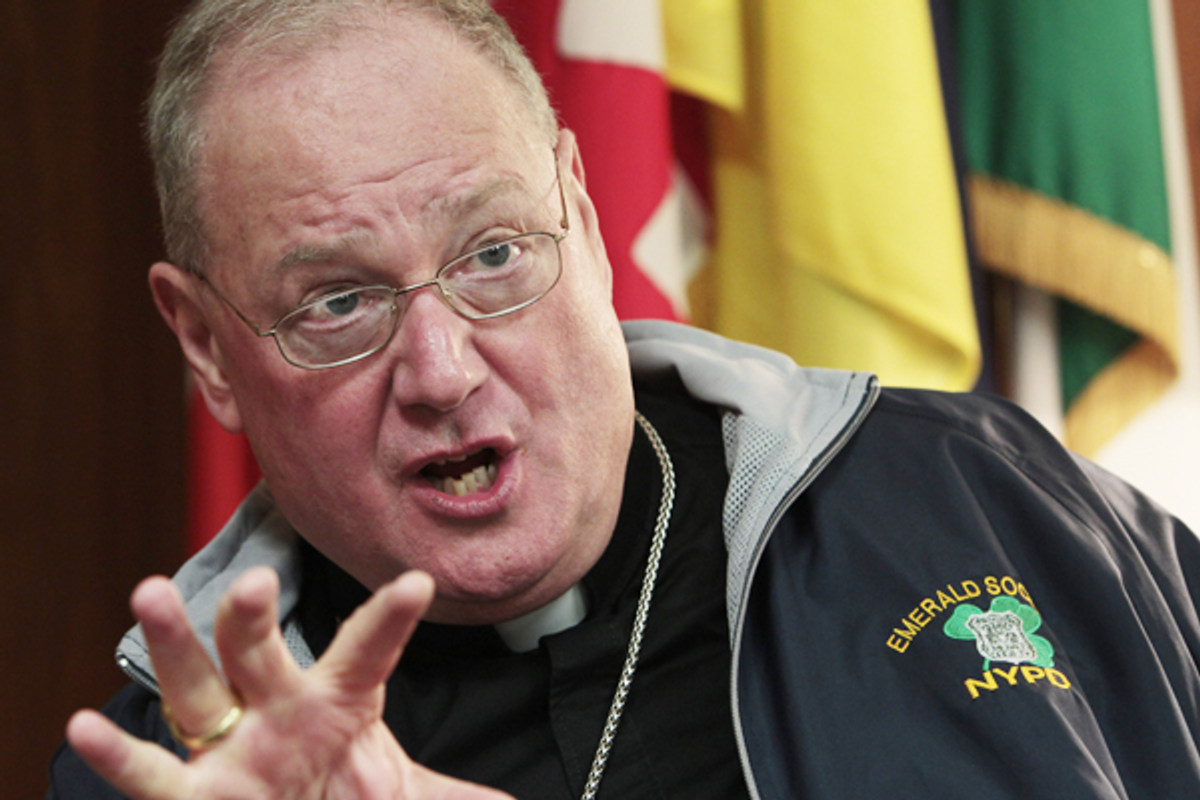 Archbishop of New York Timothy Dolan is interviewed at the North American College in Rome, Feb. 14, 2012.
--

For the record, the priest who married my wife and me in 1967 advised us that we could in good faith practice birth control. He reasoned that as Pope Paul VI was then preparing an encyclical regarding faith and sexuality, young Catholics could reasonably assume that church dogma regarding contraception would soon change to reflect contemporary realities: specifically that a couple intending to bring children into their marriage might legitimately seek to do so in their own time.

A university chaplain, he no doubt understood how the combination of Rome’s authoritarianism and theological nit-picking tended to drive educated young people from the church. Anyway, everybody knows how that worked out. Next came Humanae Vitae, Pope Paul VI’s 1968 doubling down on the church’s blanket condemnation of artificial means of birth control — a blast from the medieval past as most American Catholics now see it.

“Vatican Roulette,” we called it, and like the vast majority, declined to play. Surveys have shown that approximately 13 percent of the faithful agree with the Roman Catholic Church’s categorical ban on birth control; a mere 2 percent actually practice what the bishops preach. For most, it isn’t a serious personal issue. Sure, Your Grace, whatever.

For that matter, birthrates are declining in Catholic countries around the world. And a blessing it is, if poverty and human dignity concern you.

Until the U.S. Conference of Bishops recently got crosswise with the Obama administration, even the church rarely emphasized the contraceptive issue. So at first, I was mainly struck by the sheer quaintness of it all. (As, evidently, were many Catholic universities and hospitals quietly complying with state laws mandating contraceptive coverage.) The bishops’ indignant fulminations about their wounded consciences put me in mind of the hilarious production number in Monty Python’s “The Meaning of Life,” with its chorus of impoverished Catholic urchins singing

Coarse jokes about priests, altar boys and contraception virtually wrote themselves. I’ll spare you. But while we’re at it, let’s light a candle for Sinead O’Connor, an eccentric woman in combat boots with a shaven head, who tore up the pope’s photo on “Saturday Night Live” in 1992 to protest clerical sexual abuse of children in her native Ireland: wrecking her U.S. career to make a point entirely lost upon most viewers at the time.

In a bankruptcy proceeding last week, the diocese of Milwaukee listed 8,000 claims of sexual abuse among its liabilities. I’m with Esquire’s Charles P. Pierce, who writes that the great contraceptive kerfuffle with the Obama administration represents a fairly obvious power play by “the institutional American church to regain the power and influence in the secular government that it lost when it was exposed to be a multigenerational conspiracy to obstruct justice.”

If the reader detects bitterness, that’s an error of tone. The best priest I know is prone to remind his parishioners that the church is not God; rather, it’s a human institution, prone to sin and error. Recently watching him bless four little girls who carried alms to the altar, I was moved to think how humble, hardworking priests like him are also victims of the church hierarchy’s grave moral failure.

So you’d think they’d be a bit more modest in their rhetoric, the bishops. Particularly in anything touching upon human sexuality. This may be the place to say that I speak for nobody but myself. Not for Irish Catholics, Catholics in the South, Catholics Who Raise Fleckvieh Simmental Cows, nor even for my wife.

Her issue is how easily rich people are granted marriage annulments. The late Sen. Ted Kennedy’s marriage was declared null and void after 24 years and three children because — get this — he’d entered it with reservations. Specifically, he never intended to quit “dating.” (Evidently a family tradition.) Never mind that Kennedy’s ex-wife Joan agreed. Mine found it sickening, a patent end-run around the church’s unwillingness to countenance divorce.

For that matter, a couple of bishops attended Newt Gingrich’s third wedding. So don’t tell me they couldn’t find a way to accommodate President Obama’s downright Jesuitical compromise to the effect that Catholic hospitals don’t have to offer employees contraceptive care, but their insurance companies do. Canon lawyers make distinctions like that one every day.

Instead, they’ve settled upon a partisan power play to subvert the First Amendment rights they claim. Look, nobody’s forced to use contraceptives; it’s an individual’s choice, nobody else’s. Religious organizations have the right to believe anything they like, but not to impose those beliefs upon others. By essentially demanding a Catholic veto, the bishops and their GOP allies would impose their theological views upon millions of American women as a condition of employment.

That’s not “liberty,” it’s liberty’s opposite; and precisely what the First Amendment was written to prevent.