Hollywood's real-life night at the museum

London's sold-out Leonardo exhibition is coming to a theater near you. How does fine art work at the movies? 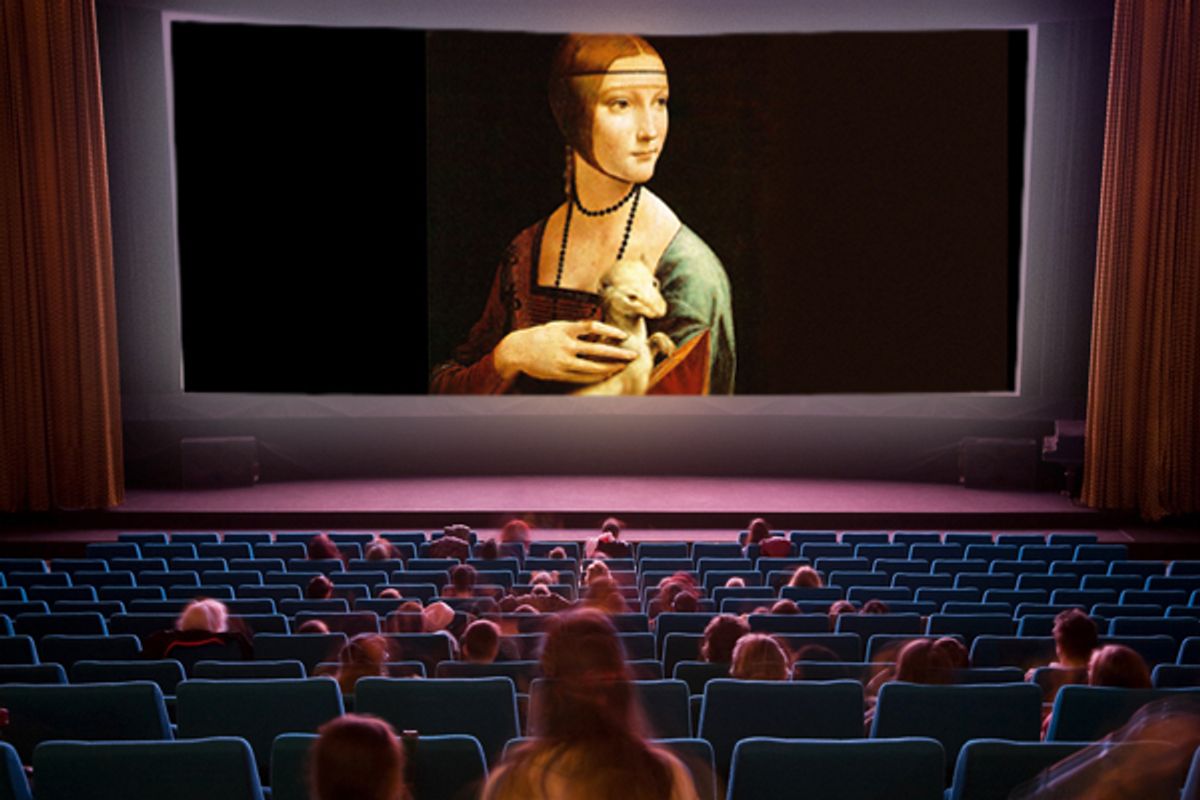 It's too late: You can beg, borrow and steal all you want, but you'll never see the Leonardo da Vinci exhibition whose recent run in London inspired a genuine mania. Only an estimated couple of hundred thousand people -- many of whom waited on line for hours or paid through the nose to get in -- were fortunate enough to personally witness the Renaissance master's three-month occupation of the British capital's imposing National Gallery.

All might not be lost, however. At least, that's how the producers and distributors of "Leonardo Live," a documentary that airs tonight in nearly 1,000 theaters around the world, are hoping you'll feel. The movie takes viewers through the exhibition at the time of its opening, enhancing the gallery experience with additional behind-the-scenes interviews and features.

So far, reception of "Leonardo Live" has been mixed. (The New York Times calls it "strangely hectic, occasionally informative and sometimes even insightful," comparing sections to "a high-art version of 'New Year’s Rockin’ Eve.'") But Julie Borchard-Young, president of distributing company BY Experience (which works on many other arts-related live cinemacasts, such as "the Met: Live in HD"), says she believes in the project because it will make an international phenomenon accessible to interested viewers who would otherwise be shut out.

"Most people have bought a movie ticket in their lives, but maybe not many people have had the opportunity to actually travel to London and go to a gallery or an exhibition," she says. "This is just a more normal experience ... I think that's the biggest benefit."

While the Leonardo exhibition is particularly well-suited to this format and presentation for a number of reasons (the artist's fame and the show's staggering popularity among the most obvious), Borchard-Young says the "experiment" has generated interest from a number of other galleries and institutions keen to explore the options for future projects. "This is the first" such broadcast, she says, but it "certainly won't be the last."

The appraiser, consultant and fine art scholar Robert Simon, who worked to authenticate the painting "Salvator Mundi" (one of seven Leonardo paintings on display in the exhibition) and appears in the film, spoke to me about the pros and cons of viewing art exhibitions on-screen.

When you first heard that there was going to be a film of the exhibition, what did you think? Were you at all reluctant to participate?

I thought it was curious. Curious, and I didn't quite understand it -- I didn't understand exactly why they were making it, and whether anyone would ever want to watch it.

Now that you've seen both -- the real-life exhibition and the film -- what do you think?

I've seen the exhibition a few times, and I saw the film once. And I understand now! I'm speaking just from the point of view of a viewer, not as a participant. The experience of seeing the exhibition the way it was recorded on film was really quite innovative and interesting. And for those who have not seen the exhibition and won't be able to -- which is 99.9 percent of the world -- it's an amazing record of it, a very different kind of experience of an exhibition. And, obviously, a permanent one.

Some people were willing to pay astronomical sums just to see these works in person -- and they might not be as excited about seeing the same art on a movie screen. But at the same time, the movie version gives you the chance to get closer to some of the paintings -- and you don't have to jostle with a crowd. What are the pros and cons of this format?

The cons are basically few. If you're not going to see the exhibition, then there's basically no con to it.

In terms of experiencing a work of art directly, there's truly nothing like that in the world. That's one of the great things about art: You're there, and there's no mediation. There's no technology screen ... But it's not always possible. And when you [compare this to] looking at the catalog or guidebook for an exhibition -- or even something that one would see today online [an online tour or exhibition excerpt] -- this is at a completely different level, because the quality is so high in the filming. There's nothing like the big screen; it's amazing, and I think it [says a lot] about the quality of the art that these pictures and drawings -- which may be 2 feet high at the most (there are a couple that are larger) -- are put up on a very large screen, and they tolerate it well, and you can see details that you'd never see otherwise. And yes, there are no people there.

The other thing that I think is very interesting and positive about the film is that ... it gives you a little of the excitement of what it's like to be at a major opening of an exhibition, in terms of the people who are there and the physical layout of the galleries: how the pictures are hung, what the exhibition's curators are trying to convey. These things are organized and thought out so carefully over a period of years, in terms of the themes of particular rooms, the chronology, the subjects, [and] how it's put together for the viewer, who will experience it in the exhibition. Of course, you never get that in the [catalog]. It's just not something that can be conveyed that way. Whereas there's part of this film -- I think it's early on -- in which the presenter basically walks through the exhibition. There's a camera following him; it's maybe a little dizzying in HD -- I found it that way -- but it gave you an overview of what was going on.

[This] doesn't take the place of the exhibition, I'm happy to say, but it's a lot better than not seeing the exhibition, and for those who have seen the exhibition, it also adds another dimension. It's a little bit like what people do with the opera: Opera is a wonderful thing to experience in person, and yet the film versions of it are something else, and they're really quite effective in conveying what goes on to those who are unable to attend. They're also able to see things that they cannot see when they do attend.