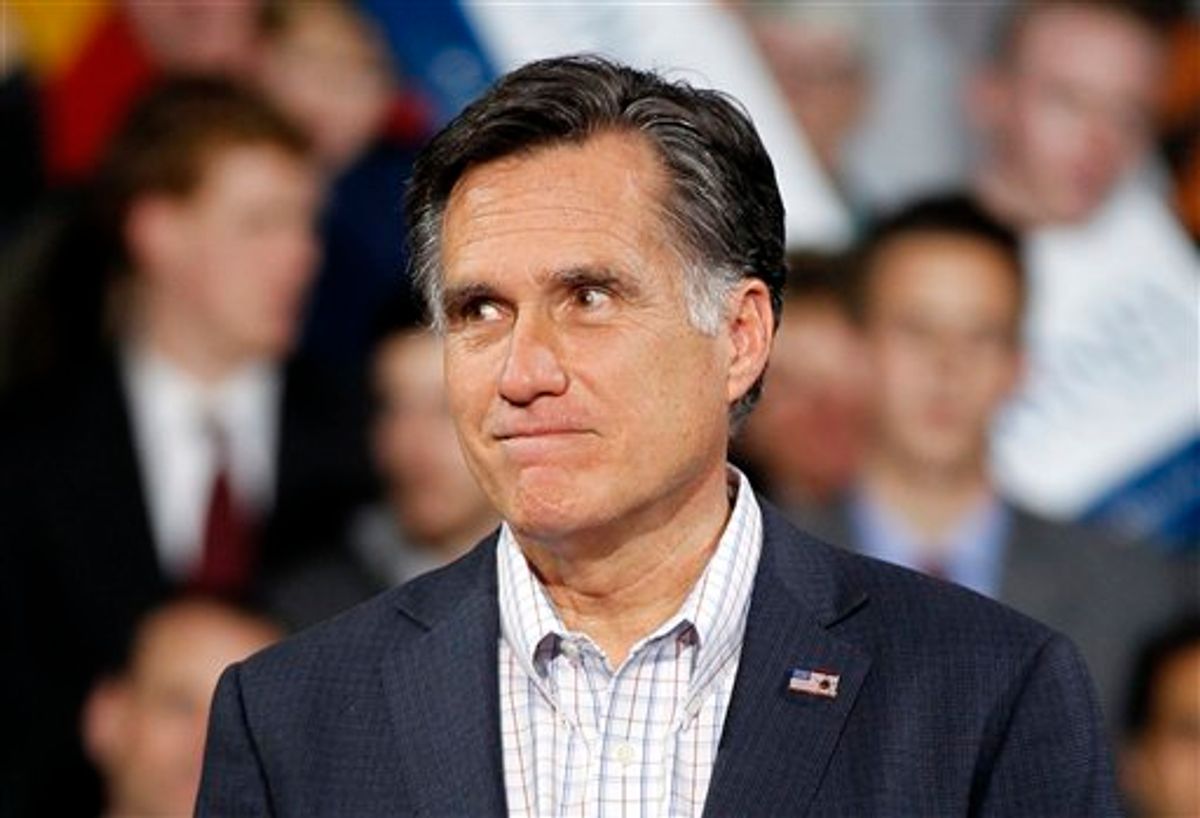 Word is now breaking that Mitt Romney has decided not to participate in a long-scheduled debate on March 1, just days before the critical Super Tuesday primaries. Romney's campaign has yet to confirm the news, but a spokesman for the Georgia Republican Party -- which along with CNN is sponsoring the debate -- is saying that "word was passed along to CNN this morning" by the campaign, while CBS News and National Journal report that Romney is blaming a scheduling conflict.

Assuming the reports are true, that's a transparently lame excuse. Even if Romney has other events planned for the same night, he has two weeks to shuffle his schedule around. Besides, the GOP debates have been must-see events that have attracted massive audiences; the entire political world essentially shuts down when they take place. What could Romney possibly have scheduled that would keep him from attending?

Clearly, this is about Romney not wanting to take part -- which, in and of itself, is hardly surprising. Debates can be tense and unpredictable and Romney comes to all of them with a target on his back. And in Rick Santorum, he now faces a main rival who is actually pretty good at them. Santorum knows exactly where Romney's weaknesses are and exactly how to attack him. This is a threat that Romney didn't have to worry much about with Rick Perry (who struggled to formulate complete thoughts on his feet), Herman Cain (who literally had nothing to say besides "9-9-9") and Newt Gingrich, who melted down when Romney turned up the heat in two Florida debates last month. So from Romney's standpoint, it would be ideal not to have to worry about any debate slip-ups and to focus on using his huge financial advantage to destroy Santorum with negative ads.

The problem is that skipping debates is something that confident, inevitable front-runners do -- not front-runners who are so wounded that they might not even be front-runners anymore. With his poll numbers crashing and Santorum surging, Romney's debate boycott looks awful, a reeling candidate who's afraid to face his opponents. And it plays right into Santorum's efforts to paint Romney as a candidate who has nothing to offer besides a deep bankroll and negative ads. This gives Santorum a valuable talking point for the days ahead -- one that will become even more potent if he's able to knock off Romney in Michigan on Feb. 28.

The funny thing is that Romney is actually pretty good at debates. Yes, he's had a few slip-ups and he's benefited from feeble opposition, but chances are he'd do just fine on March 1 -- just as he'll probably survive next week's debate in Arizona, assuming he doesn't back out of that too. In other words, he may get more grief now for skipping a debate than he'd get from his opponents if he actually showed up at it.

Update: Romney's campaign has now confirmed that he won't be at the March 1 debate:

“Gov. Romney will be spending a lot of time campaigning in Georgia and Ohio ahead of Super Tuesday,” spokeswoman Andrea Saul said in a statement. “With eight other states voting on March 6, we will be campaigning in other parts of the country and unable to schedule the CNN Georgia debate. We have participated in 20 debates, including eight from CNN.”