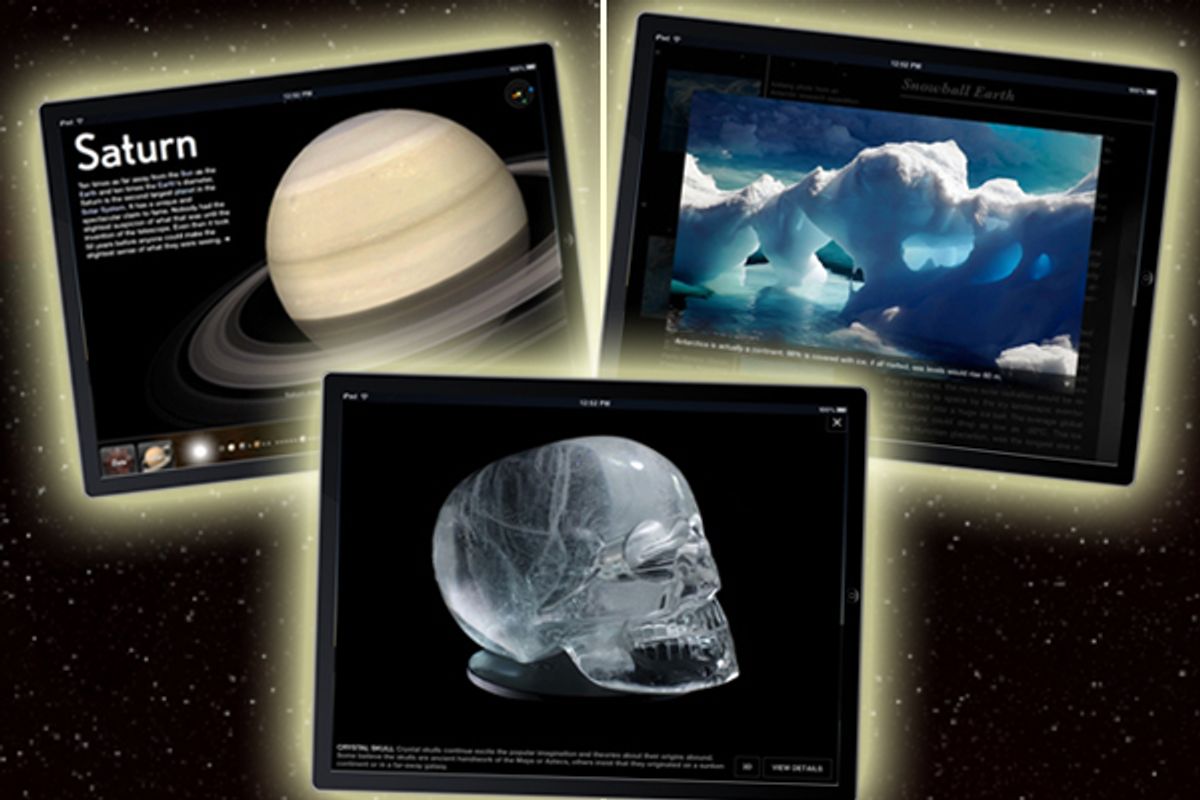 Prognostication about the future of the book is everywhere; making predictions about what books will be like tomorrow seems much more profitable (not to mention easier) than creating actual books today. Yet all these prophecies collide with a basic problem: The book, as it currently exists, is hard to improve upon. Cheap, highly portable and free of maddening formatting problems, the printed book has met most readers' needs pretty well. Sure, in recent years, technology has transformed the distribution of texts -- you can order any book online or tote around dozens of e-books in a lightweight reader -- but the vast majority of these books remain essentially the same: linear strings of words, with the occasional image.

Still, the dream of interactive books lives on, despite a series of digital disappointments ranging from hypertext fiction to CD-ROMs to experimental Web novels to current ventures in social reading. Previously, I wrote about the inherent tensions between interactivity and narrative in enhanced fiction e-books. Indeed, there's little evidence that images, videos, sound effects or clickable doohickeys add anything of value in the eyes of most readers of prose fiction. As the Wall Street Journal recently reported, the enhanced e-book of Stephen King's novel "11/22/63" contained a 13-minute film by King himself, yet only 45,000 readers were willing to shell out the extra $2 to get it, compared to 300,000 who bought the unadorned e-book ($14.99) or the 1 million purchasers of the print edition ($35). King's publisher expressed doubts that enhanced e-books were worth the extra trouble and expense.

Nonfiction, however, is another matter. While some developers labor in vain to improve upon the immersive storytelling of novelists like King, others are taking factual material that might have once been published between hard covers and turning it into strange and wondrous new creations. The most successfully enhanced e-book is the one you may not even recognize as a book.

The first among these were introductory science apps like "The Elements" (used to showcase the iPad's potential when the device was first released) and astronomy apps like "Solar System for iPad" and "Solar Walk." A recent release, "Back in Time," lets the user turn the hands of a cosmic clock and scroll through a series of images to explore a timeline of the history of the universe. All of these books -- for that's the category they're given in Apple's App Store -- use touch-responsive 3-D animation and other model-like features to help the reader visualize concepts well outside their everyday experience: vast distances in time or space, the motion of the planets and the relationship between molecular structure and palpable objects. Technically, I know that the earth's tilted axis as it orbits the sun determines the changing seasons, but "Solar Walk" allows me to see it happen.

The popularity of science apps like "The Elements" no doubt encouraged Apple to move aggressively into digital textbook publishing with its recent upgrade to iBooks. The iBookstore, with its too-broad categories and abysmal metadata, has failed to emerge as a contender among retailers of trade e-books. Apple now seems to be concentrating its energies on the education market. IBooks titles can incorporate an array of visual, audio and video features, which make it possible for publishers to create books like "The Elements" for older students. Sometimes the results add little more than eye candy, sometimes not. The sample book released with the upgrade, "Life on Earth" by E.O. Wilson, sports a lot of beautiful photographs and videos, few of which are particularly informative, but the animations of cell activity do help make the weird-looking structures of the microscopic world comprehensible.

Whole categories of routine instructional books are in the process of being digitally revolutionized. Cookbooks can include demonstration videos for beginners and advanced forms of recipe organization for more practiced cooks. You can better learn to lift hand weights or fix a car or do card tricks from a combination of text and video. There's not much glamour or art in enhancing such practical titles, but there's a lot of common sense. The linearity of stories may be fundamental to the pleasure they offer, but in books like these, linearity was always merely arbitrary, imposed by the print book form. Hardly anyone reads them one page at a time, in order, from cover to cover.

Even a work of substantive narrative nonfiction, however, can be genuinely enriched with some basic multimedia add-ons. The enhanced edition of Katherine Boo's "Behind the Beautiful Forevers" comes with several short videos featuring the Mumbai slum dwellers who serve as the main characters in that remarkable book. These films form a moving version of the photographic inserts traditionally tipped into the center of biographies and histories. You can't read the book without wanting to know what these people look like. However, since most readers deciding which version to buy haven't read the book yet, it will be interesting to see how many are willing to spring the extra buck for the edition with the videos.

Boo shot the footage on a Flip camera as part of her research. Once upon a time (say, two years ago), these videos might have been offered for free on the author's or publisher's website. But not every nonfiction author just happens to have a lot of documentary images and video on hand, waiting to be repurposed for publication. The great problem with any e-book enhancement is cost. Original artwork, video and animation must be commissioned or the right to use preexisting works obtained. That gets expensive -- really expensive. Voice-overs and readings call for the skills of professional actors. The whole kit and caboodle then has to be inserted into the text, which depending on how well-integrated it is, may require the expertise of programmers.

Most authors and book publishers aren't in the business of producing this sort of thing. Add to that a prevailing attitude among consumers that e-books ought to be cheaper than their print counterparts -- no matter what extras they include -- and there's not much incentive for book publishers or authors to take the trouble. As understandable as this reluctance may be from a business perspective, it's still disappointing. Imagine how much more enlightening, say, a book on popular physics or the military campaigns of Alexander the Great or the current fiscal crisis might be with a few well-considered moving or interactive images.

An example, and one of the few enhanced e-books considered a genuine success, is Rick Perlstein's "Nixonland," an examination of the popular right-wing response to the counterculture of the 1960s. The enhanced e-book edition includes 27 clips, taken from CBS News archives, illustrating key events in a highly televised period of American history. Each clip is embedded in the page that refers to it. But bear in mind that the book's publisher, Simon & Schuster, is a division of CBS, which surely made it much easier to obtain the rights to use those clips.

"Nixonland" started with a (celebrated) text, then added video. NBC News recently announced the formation of a digital book publishing division that works in reverse. It will produce titles on current events and personalities with the clips as the springboard, and then incorporate text from published books, NBC staff writers and freelancers. Companies who already know how to make videos, animated graphics and complex websites have the edge when it comes to publishing multimedia e-books. All they have to do is hire some professional writers. Traditional book publishers, on the other hand, have to figure out how to commission several types of visual media despite having little experience in working with anything but text. Besides, writing is cheap, right?

Not so fast. Complaints from app consumers about the weak writing in some otherwise spectacular digital books suggest that corner-cutting in this department is rife. Programmer- or designer-driven works often borrow text from Wikipedia and other public-domain sources, and this does not go unnoticed. One happy exception is the recently published "Skulls by Simon Winchester," an app by Touch Press, the company responsible for "The Elements" and last year's groundbreaking T.S. Eliot e-book, "The Waste Land." The ever-debonair Winchester, bestselling author of "The Professor and the Madman," not only wrote the text that accompanies the app's 300 rotatable images of human and animal skulls (as well as artifacts representing the human head) -- he also reads it. The result is informative and thoughtful as well as gorgeous and diverting. More, please.