Is China our future?

If we don't want six-day workweeks at rock-bottom pay, we need to rethink how America's free market functions 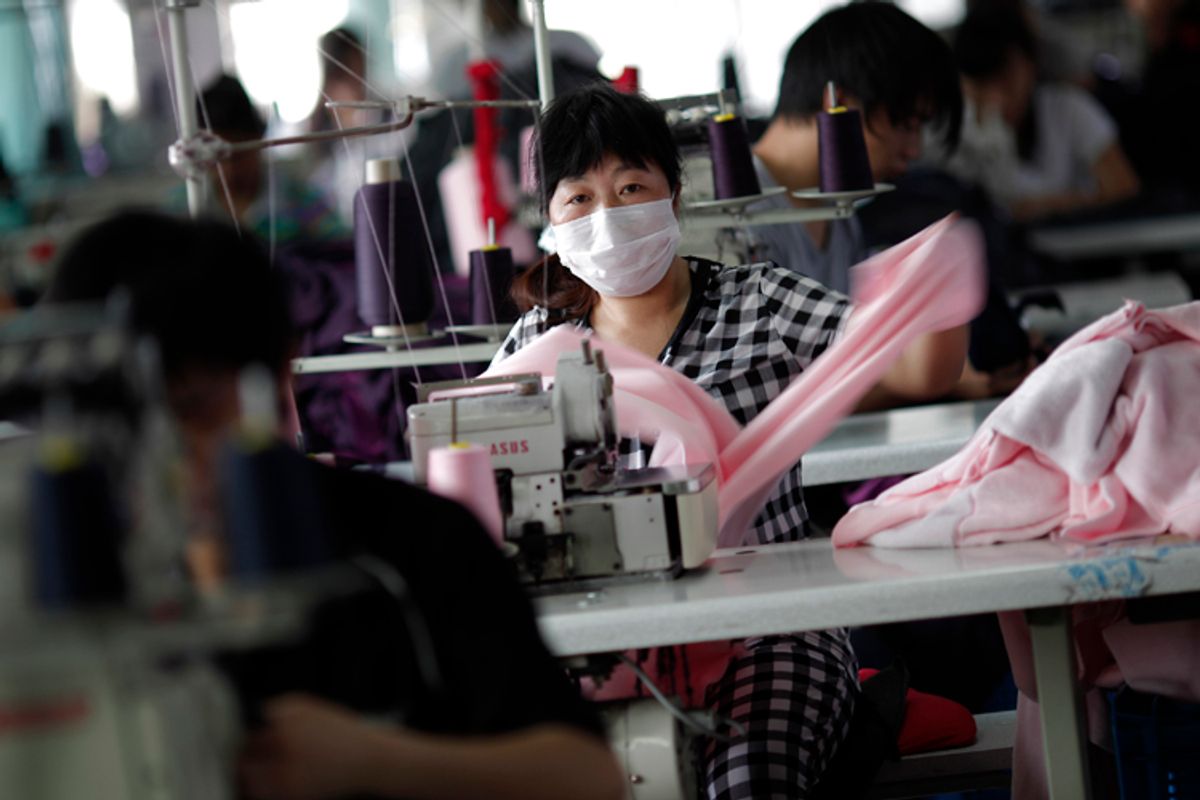 For the last two decades, we've heard many myths purporting to explain the loss of American manufacturing jobs. CEOs, for instance, typically say they have sent jobs overseas because they can't find skilled American workers. Conservative economists say the giant sucking sound is that of technology replacing obsolete workers. And conservative politicians say job loss is the result of high corporate tax rates, even though ours are among the lowest effective corporate tax rates in the industrialized world.

All of these explanations are fables with a purpose: They are designed to deny the obvious by pretending that exploitation and policies that encourage exploitation aren't the root cause of offshoring. More specifically, they ask us to ignore the fact that tariff-free trade agreements and tax loopholes incentivize companies to shift production to countries where slave wages, environmental degradation and human rights abuses are tolerated.

But now at least a few manufacturing jobs are suddenly coming back to America, and the same CEOs, economists and politicians who have tried to squelch any honest discussion of exploitation are inadvertently admitting that exploitation has always been the manufacturing economy's invisible hand. They are admitting it when they concede that jobs are returning primarily because American wages are precipitously dropping at the same time Chinese minimum wages have slightly risen -- from awful (in some places, $100 month) to a mere terrible (still just a $240 a month).

This is not some fringe theory. It's a widely acknowledged fact.

President Barack Obama admitted it when in his State of the Union address he said jobs are returning because "it’s getting more expensive to do business in places like China." Economists at the Boston Consulting Group underscored it when in August they said employment growth is happening because rising Chinese wages are "eroding China’s cost advantages" while the United States "is becoming a lower-cost country" as American wages decline. And GE Consumer & Industrial CEO James Campbell reiterated it when he recently told the New York Times that "making things in America is as viable as making things any place" because domestic labor costs are now "significantly less with the competitive wages" -- read: far lower wages -- now accepted by American workers.

Now that this consensus is finally out in the open, the real question for America is simple: Do we accept an economic competition that asks us to emulate China?

If our answer is yes, then we should support current state legislative proposals to reduce child labor protections; back federal legislation to eliminate all environmental, wage and workplace safety laws; and applaud corporations that crush unions and further reduce wages in America. We should also probably encourage our fellow countrymen to follow Apple Inc.'s Chinese workforce by simply accepting $17-a-day paychecks, 12-hour workdays and six-day workweeks. Indeed, if we accept this race-to-the-bottom style of competition, then we're basically saying Chicago should look more like Chengdu; our heartland should look more like the poverty-stricken interior of China; and 21st century America should look more like late-19th century America.

If, alternately, we reject this dystopian future, then it requires us to more seriously consider things like tariffs, industrial policy, tax incentives for domestic investment and Buy America laws for government procurement. In other words, it requires us to declare that access to the American marketplace is no longer free -- that corporations who want to sell things to Americans must play by our wage, environmental and human rights rules no matter where they make their products.

Between these two paths, there is no "third way"- - and doing nothing will likely mean that the uptick in American manufacturing jobs will prove fleeting. A choice, therefore, must be made, and it should be a no-brainer.