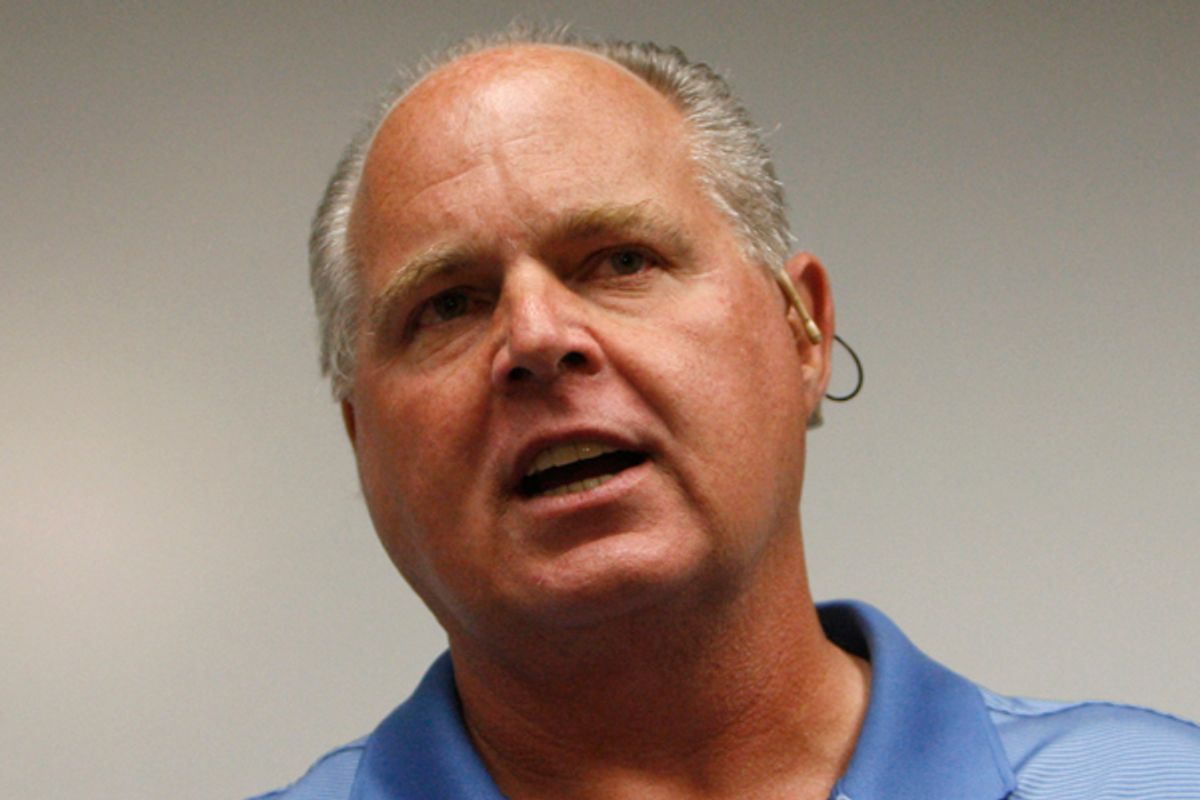 I've decided Rush Limbaugh must be a closeted Democrat. I can't think of any other reason he would be leading the Republican Party over a political cliff by advising that they double down on the culture wars.

With new poll data showing that President Obama is quickly gaining ground among women voters, at least partly due to Republican extremism on contraception, Limbaugh told his listeners Thursday that the GOP would win the election if it's decided on culture-war terms.

“Something tells me, that if the upcoming election could be decided on social issues, the Republicans could win that in a landslide, because we are on the right side of the culture war,” he said. “The problem is, we’re scared to death of it. The Republican establishment wants no part of it.”

A majority of women voters, 51 percent, now approve of the job Obama is doing, according to the weekly Gallup tracking poll, up from a low of 41 percent last August (only 43 percent of men approve.) A Democracy Corps poll taken from Feb. 8-13 found Obama now leads Mitt Romney 65-30 among unmarried women, an 18-point swing since November. (Yes, Democracy Corps is run by Democrats, but they regularly deliver bad news for their party when their polls require it.) Women may also be behind some more bad news for Republicans: A majority of seniors, thought to be the party's base, now view the GOP negatively, according to Democracy Corps. Most seniors happen to be women.

It's not only women who disapprove of Republican extremism on contraception, though: a New York Times poll this week found that two-thirds of all voters support requiring health care plans to cover the whole cost of birth control – including almost three-quarters of women. By the way, Catholics support the measure 67-25. The only group that has a problem with it is evangelical Christians, the core of the GOP base.

Please remember that all three of those polls were taken before Thursday, when Rick Santorum's money man Foster Freiss made his idiotic joke about aspirin serving as birth control (if it's held tightly between the knees, a joke straight out of a '50s locker room) and Darrell Issa assembled only men on a panel to talk about what women can do with their bodies.

That's why Rush Limbaugh can't even keep up the pretext that contraception is a winning issue for his party throughout an entire broadcast. During the very same show in which he told Republicans they'd win if the election was decided on culture-war issues, he also accused Democrats of starting the birth-control debate to hurt Santorum. But how can it hurt him if a culture war is good for Republicans? None of his callers asked him that question. Here's more of what he said:

The whole point of bringing up contraception and trying to make it look like the Republicans want to ban birth control is simply something to excite the Democrat base, which has been depressed as it can be because their president has done a rotten job.  The economy is in the tank.

Of course, Limbaugh is wrong about that too. The economy isn't great, but it's improving and voters are giving the president better marks for that, too. Also: the base isn't depressed. The Democracy Corps poll found that Republican Party extremism combined with the improving economy is revving up the Democratic base again, pulling what they call the "Rising American Electorate" of young people, unmarried women and non-white voters back behind Obama and his party. Meanwhile, it's the GOP base that appears depressed, with turnout either flat or down in every primary and caucus except South Carolina.

Even Michael Steele didn't try to spin the bad news for his party on "Hardball" today. I did catch him trying to blame Obama for craftily making the contraception debate about…contraception. How dare he?

Here's my "Hardball" conversation with Steele. I had the easy side this time.