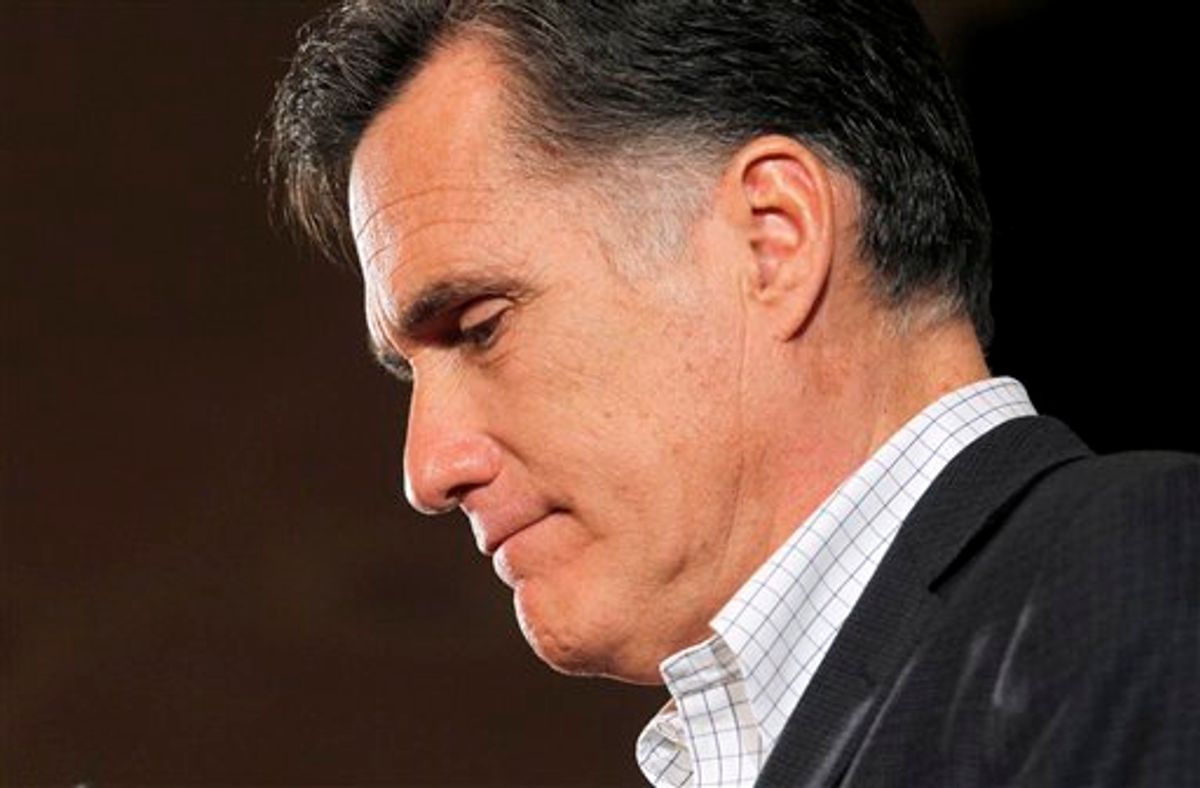 On the subject of the federal government's bailout of Chrysler and General Motors, it has become essentially impossible for Mitt Romney to say anything coherent.

Romney's problem, of course, is that he positioned himself as the face of bailout opposition, arguing in a Nov. 18, 2008, New York Times Op-Ed that "if General Motors, Ford and Chrysler get the bailout that their chief executives asked for yesterday, you can kiss the American automotive industry goodbye." But with the passage of time, that position has become more and more laughable -- especially on a day like Thursday, when GM announced record profits ($7.6 billion) for 2011, which will result in nearly 50,000 hourly workers receiving profit-sharing checks of $7,000.

By any reasonable standard, the federal government's auto industry bailout has been a smashing success, but to admit this Romney would be admitting that he was wrong in a big way. And not just on any issue. After all, Romney grew up in Michigan as the son of the president of American Motors, and he presents himself to voters as a turnaround specialist whose unique insight into the world of business and industry will translate into a booming economy if he's elected president. But now it looks like Barack Obama (and George W. Bush, for that matter) knew better than him.

So as he campaigns in Michigan now, Romney is playing dumb, pretending that the auto industry's comeback actually validates what he said in '08 and that Obama -- whose administration nudged GM and Chrysler into structured bankruptcy -- was actually following the course that he prescribed. The only difference in their approaches, as Romney tells it, is that he would have forced the auto companies to rely on private financing to get through the bankruptcy process, and not the federal government. Which, as Jonathan Cohn points out, would probably have been catastrophic:

In late 2008 and early 2009, when Chrysler and GM ran out of money, private financing was not available. Remember, this was not long after Lehman had collapsed and the entire financial industry was on the brink of collapse. Had the car companies attempted to reorganize through bankruptcy on their own, it’s quite likely they could not have found the money to continue operations. That would have meant liquidation and mass layoffs. Chrysler and GM would be gone, sending an economic shockwave through the entire Midwest and possibly the whole country. Every company connected to the domestic auto industry would have suffered, which is why Ford, although healthy enough to survive without federal assistance in 2009, supported the Obama rescue.

Needless to say, the news of GM's profits couldn't come at a worse time for Romney, who is now running behind Rick Santorum in Michigan. But even if he comes back and wins the state on Feb. 28 and grabs the Republican nomination, his bailout headaches won't go away. The revival of the auto industry is one of the signature triumphs of Obama's first term, something he and his campaign will spend the summer and fall reminding Americans of. And it will make for the perfect rebuttal for Obama every time Romney attacks him for his (supposedly) anti-business, jobs-killing agenda.

In a way, Romney's predicament calls to mind the position Republicans were in when Bill Clinton ran for reelection in 1996. By that point in Clinton's term, the economy was strong and deficits were shrinking. This was problem enough for the opposition party, but it was made worse by the fact that literally every Republican in the House and Senate had voted against Clinton's 1993 economic program -- with many loudly warning that it would cost millions of jobs, run up the deficit and plunge the country into a painful recession.

At the time, that posturing had been beneficial to the GOP, which won control of the House and Senate in 1994 in part by accusing Clinton of enacting the largest tax increase in history. But by '96, with Americans feeling good about the direction of the country and none of the dire '93 predictions coming to pass, Clinton was able to rub it in Republicans' faces, and there was really nothing for them to say back.

The same is probably true for Romney now. It was easy to oppose the bailouts a few years ago, but there just isn't much he can say now.