When I was captured by Gadhafi's forces

After the Libyan rebels we were embedded with came under fire, we became hostages of the regime 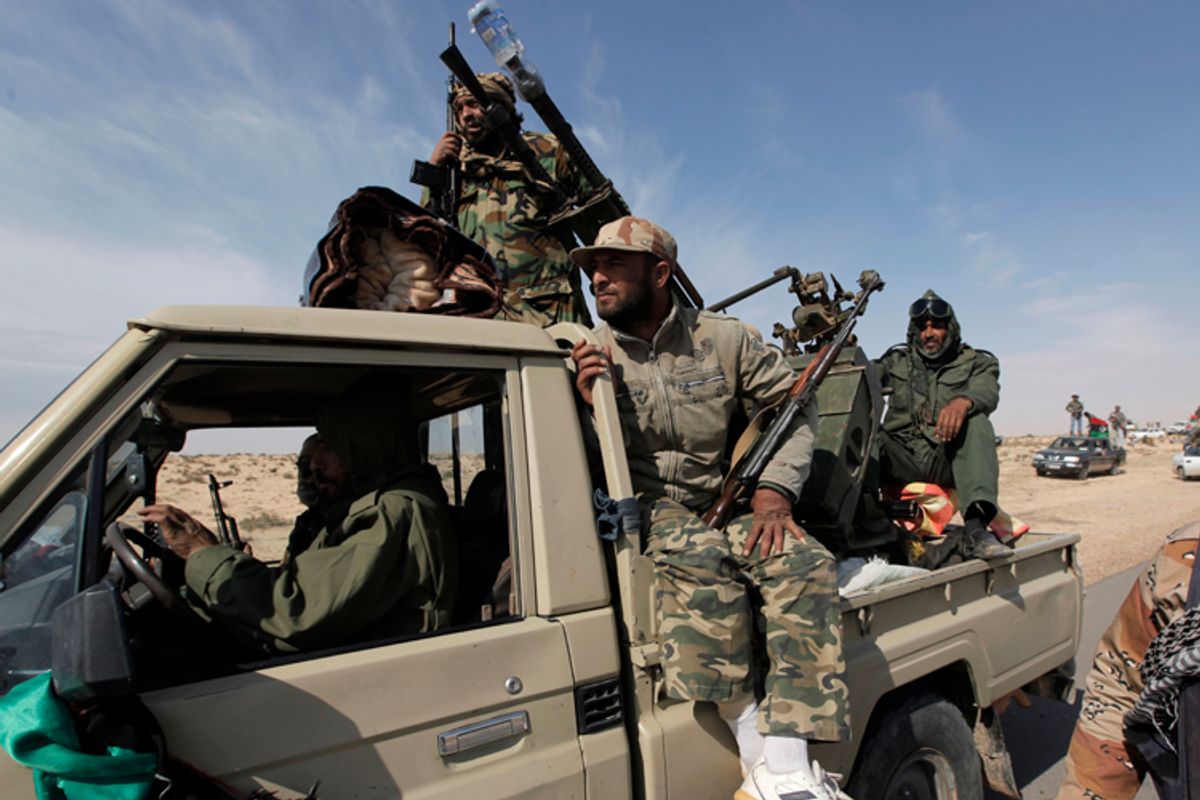 There is a single main highway along which lies every major city between the rebel stronghold of Benghazi in the east and the capital Tripoli in the west. It snakes along the coast and passes through Ajdabiya, Brega, Sirte and Misrata, cities made world famous by months of back and forth, and deadly, conflict.

The four of us were riding in the back of a blazing red minibus at the beginning of April, approaching the strategic oil town of Brega, where the worst fighting of the conflict had been taking place. Our driver was a teenage boy, like his friend in the passenger's seat. The so-called front in this war was always changing. But we had already passed the last rebel checkpoint and we knew whatever front existed was beginning to reveal itself.

Our goal was to learn, and then report, who was in control of Brega.

We were getting nervous. We knew the boys driving were scouting the road ahead, and maybe on their own initiative. Anton, the most experienced journalist in the group, mumbled something about it being risky. We could feel our guts begin to tighten. Manu and I looked at each other. But said nothing.

Two armed trucks raced toward us from behind, filling up our back window before soaring past. This was how the rebel convoys seemed to form, like schools of fish that hunted together, but have no clear leader or command structure.

Over a small hill we saw some men, boys really, standing around a sedan. We leaped out to do some interviews. Clare asked how far away Gadhafi's forces were. The boy said 300 meters. 300 meters? I looked at Clare. It seemed impossible. But as a precaution, we hustled off to the side of the road. A static mortar or a rocket position could have easily dialed in on us from that distance. The small convoy rolled ahead, leaving us behind in what we thought was relative safety.

We watched the rebels push forward. They weren’t 200 meters away, at the rise of the next hill, when they sped back around. We watched for a second as they beared back down on us, followed by a barrage of machine gun fire. The loudest I had ever heard. Our small group of journalists — Anton, Clare, my fellow American, and Manu, a Spanish photographer — took off running.

"We need to get to the vehicles,” Anton shouted. But the rebel trucks were retreating too fast and the ones in pursuit were firing wildly. There were two Gadhafi military pickups — tan with large machine guns mounted on the back. The trucks were overflowing with armed men.

With all the bullets flying, we pressed ourselves as close to the ground as possible. The rebels faded into the distance and the Gadhafi trucks slowed to a stop. The shooting continued. The roar of bullets overhead sounded like machines eating up metal. AK-47 rounds ripped past us from less than 50 meters.

Libya: Tripoli scenes from the uprising:

I crawled back toward Clare and Manu, who were under several small trees. The shooting intensified. We tried to speak, to yell for each other. But the bullets tearing overhead deafened everything. In a corner of my mind I hoped that we were in a cross fire, that behind us the rebels were shooting back. I crawled forward toward a larger sand dune with my camera rolling. Anton crouched in front of me. The bullets streamed directly over my helmet and shoulders. This was no crossfire. They were shooting at us, and they were shooting to kill.

"Help, help," I heard Anton cry. His voice was weak. My mind tried to convince me of something I knew was not true. Maybe he had just fallen and twisted something. Another barrage of bullets passed over me. "Anton, are you OK?" I shouted between bursts of fire.

I’ve heard journalists say that Libya was the perfect war. A reporter could get to the front line, close enough to hear the shells coming in, and back to a comfortable hotel in Benghazi, with a solid Internet connection, by evening.

But in reality, this war was anything but perfect — something I’d soon come to learn. It was a war led by confusion, abductions and an oppressive sense of the unknown. This latest spasm of the Arab Spring had none of the idealism of Tunis or Cairo. For me, it began with a rifle butt to he head, which bled into weeks of uncertainty, crushing captivity and ended, however improbably, in a four-star hotel in the besieged Libyan capital.

Along the way, between blindfolds and quiet conversations with fellow captives deep inside the country’s brutal prison system, I witnessed the last gasps of the Gadhafi regime — a corrupt and corrupted system that for more than 40 years ruled this tribal, oil-rich land.

I had done several tours as an embedded reporter with U.S. troops in Iraq and Afghanistan. So, for me, the frontlines felt natural. And I believed it was my job. But the freedom with which you could maneuver was deceptive. There was no highly-trained U.S. platoon to escort you. And the rebels were said to be some of the worst trained soldiers in the world. Most had never held a gun before the end of February, when they stormed Benghazi's “katiba” and took them by force.

I tried to hold farther back after a few close calls — a near miss by a Girad rocket, for instance, or a tank shell ripping over the heads of Manu and I outside Ajadibya. Our ears popped. But the front kept calling.

As is common among freelancers, Clare Gillis, a 34-year-old from Connecticut, Manu Brabo, a 29-year-old from Gijon, Spain, and myself had been sharing rides and interviews together for several weeks. Anton Hammerl, a South African photographer who covered much of Africa — from the townships during Apartheid to child soldiers in the Congo — came late to our little group.

With all the rebel offensives and retreats along the coastal highway, we felt we had to get to the front every few days or risk completely losing track of the story. So on April 5, we headed out.

Our plan was to try to get a sense of who was really controlling Brega, a strategic oil town that had been the scene of some of the most deadly fighting since the uprising began several months earlier. A rebel general told us that if the rebels took Brega, they would hold it without advancing right away, thus learning from earlier mistakes where they stretched themselves too thin and were forced into whole scale retreats.

But Brega was dangerous. Manu and I had been caught in heavy shelling outside the town days before. I had seen two shells bounce off the ground a hundred meters away. A rebel was killed by shrapnel to the head in the truck Manu and I had leaped into for escape. We went with them to the hospital, hugged the bawling comrades afterwards and shot some eerie photos of them washing blood off their grenades.

Still, Brega was where the front was, so we woke up early to beat the crush of reporters. The four of us went in a Mercedes van piloted by a teen. We stopped at the only manned checkpoint some 20 kilometers outside town, where a crowd of the usual disheveled men, many of them teens, milled about waiting for the real fighters to assemble. We got out into the early sunshine and told our driver he could leave us there. It was just after 10 a.m.

We waited. Usually, with shouts of “Allah Akbar,” a convoy would push ahead, and we’d jump into one of the rebel vehicles heading to the front.

The red minibus started moving and we hustled on. It drove ahead with us as its only passengers, the young driver and his friend in front looked nervously from side to side. We stopped after a kilometer to inspect two smoldering pickup trucks, blackened crisps in the road. It appeared to have been a rebel ambush.

"Hit by a Sam 7," Anton said pointing out the expended launcher and wire guidance system leading to the cindered vehicles. I took note of his wealth of knowledge. He’d been forced to join the South African infantry as a young man and hadn’t relished it.

The firing continued all around us. The men had gotten out of their vehicles and were now approaching. “Anton!” I shouted again. He was silent. The terrifying reality grabbed hold of me. The soldiers firing probably didn't know that we were reporters. Rebels didn't dress in regular uniforms and many were often not even armed. I had to surrender or we’d all be gunned down.

I leaped up from where my head had been buried in the sand to face the group of wild men shooting uncontrollably — it seemed our only hope. I held up my hands and yelled, "Sahafa! Sahafa!" It was one of the few Arabic words I knew. It means “journalist.” I walked slowly toward them.

There were three or four skinny, Arab-looking soldiers carrying AK-47s and a larger, darker one to the right. My eyes drifted toward Anton as I stumbled past the dune ahead of me. He was lying face down in the sand, his body askew, cameras still strapped around his shoulders, his legs splayed out.

As soon as I reached the soldiers, the dark one slammed me across the chin with the butt end of his AK-47. I dropped my camera. He smashed his rifle down on my head. My helmet and Oakley sunglasses were thrown off and he punched me in the eye. Another one crushed my head several more times with an AK-47. All my instincts for self-preservation gathered within me. I went completely limp and complacent. The adrenaline was coursing so heavily through my body. I felt no pain.

I was thrown into the back of one of the pickup trucks. An Army boot pushed my face onto the floor. I glanced back and saw Manu and Clare being pulled off the ground.

A crazed looking soldier looked down and jeered at me in English, "You go on patrol! You go on patrol!" as if he knew exactly what we'd been trying to do. A cell phone was pushed close to my face. A picture was snapped. "Gadhafi Meia Meia," a younger one said, thumping his chest, “Gadhafi 100 percent.” These words terrified me. After weeks of being with rebels who said things like, “Fuck Gadhafi,” with regular consistency, we had now found ourselves with the other side, the ones who had pledged their dying allegiance to the country's dictatorial leader of more than four decades.

Clare and Manu were also forced down into the bed of the truck. Manu was face down and Clare, pushed against his side, was facing me. I looked at her for the first time. She had a purpled eye. She saw blood running from my scalp.

"Jim, are you OK?" she said, pleadingly. I nodded, and took stock of the blood pooling in the back of the truck. With a boot again on my face, my hands were bound behind me with a plastic cord. We sped away from the scene.

You can read Part 2 of James Foley's story here.