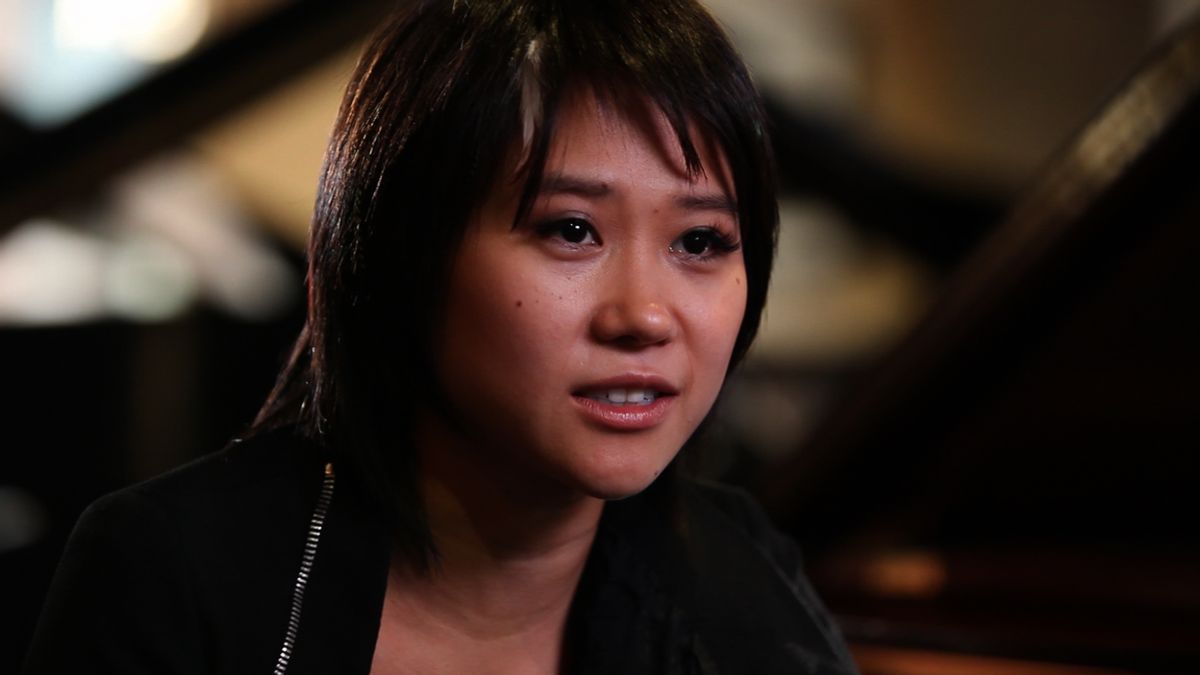 At the age of 24, Chinese-born Yuja Wang is one of the most exciting concert pianists in the world. Onstage, she cuts an elegant, sometimes provocative figure. Backstage, she's more like a teenager, noshing snacks and listening to Rihanna on her earphones. But there's no doubt that Ms. Wang, now a resident of New York, has captivated audiences and critics, from Beijing to Berlin. Her "virtuosity is stunning," says the New York Times. "An artist of dazzling genius," raves the San Francisco Chronicle. She's earned praise for her almost "superhuman keyboard technique," as well as her sensitivity and fearlessness.

We caught up with the international sensation in Los Angeles, where she performed Prokofiev at the Disney Concert Hall. Afterward, in a Steinway showroom, Wang played for us and spoke with SOUND TRACKS reporter Alexis Bloom about her life as a musical nomad.

Written in 1858 after a trip to Russia, Johann Strauss’ “Tritsch Tratsch Polka” is a jaunty, high-spirited affair and Yuja Wang obviously delights in playing it. Watch her smile at the end. If you’d like to see her perform live, Yuja Wang will be playing this April at Avery Fisher Hall with the New York Philharmonic and in Atlanta with the symphony there. In June she returns to San Francisco, where conductor Michael Tilson Thomas has been one of her strongest supporters.

We knew she was an incredible talent, but watching up close as Yuja Wang performs is another matter. She plays so lightning fast it seems as if we’ve sped up the video. Her technique is dazzling and precise, but it’s equaled by her passion and sensitivity.

In this video, recorded at the Steinway showroom in West Hollywood, Yuja is playing bits of three different pieces by Gluck, Liszt and Scriabin. It's wonderful to watch her change pace and mood and see the concentration and deep feeling in her expression. At the end, it' almost as if she emerges from an intense dream, smiling, and telling us, "This piano's nice."

Born in Beijing in 1987, Yuja Wang began playing the piano at the age of 6. From a music conservatory in China to the Curtis Institute in Philadelphia, she never stopped, and now she roams the world, playing a demanding schedule of concerts across Europe, Asia and North America. She’s recorded three critically acclaimed albums for Deutsche Grammophon, her most recent is a Grammy nominee. “I’ve been doing this my whole life,” she tells SOUND TRACKS reporter Alexis Bloom. “I can’t really remember anything before the piano.”

So, Yuja Wang is already a veteran, a self-assured and immensely accomplished virtuoso. But she’s also a young woman who travels the world, mostly alone, living in hotels and backstage dressing rooms. Is she ever lonely? “Not really,” she tells us. She’s “more alive” on the road, especially in concerts, plus “I have my BlackBerry, laptop and kindle. I’m all set.”

As you’ll see in her interview, Yuja is a warm, engaging personality with a quick laugh and a candid comment. She can be shy one moment, outspoken the next. When she’s warming up to play Rachmaninoff or Prokofiev, she likes to hear the raw wildness of Rihanna. And she’s made something of a reputation for herself in the classical world as a fashionista, not afraid to wear eye-catching outfits, including that orange dress that set off a wave of commentary last year when she appeared at the Hollywood Bowl. “I’m just being myself,” she says.

As the New York Times critic wrote after Yuja’s Carnegie Hall debut last October, “If you’ve got it, flaunt it. What matters is that Ms. Wang has got it as a pianist.”