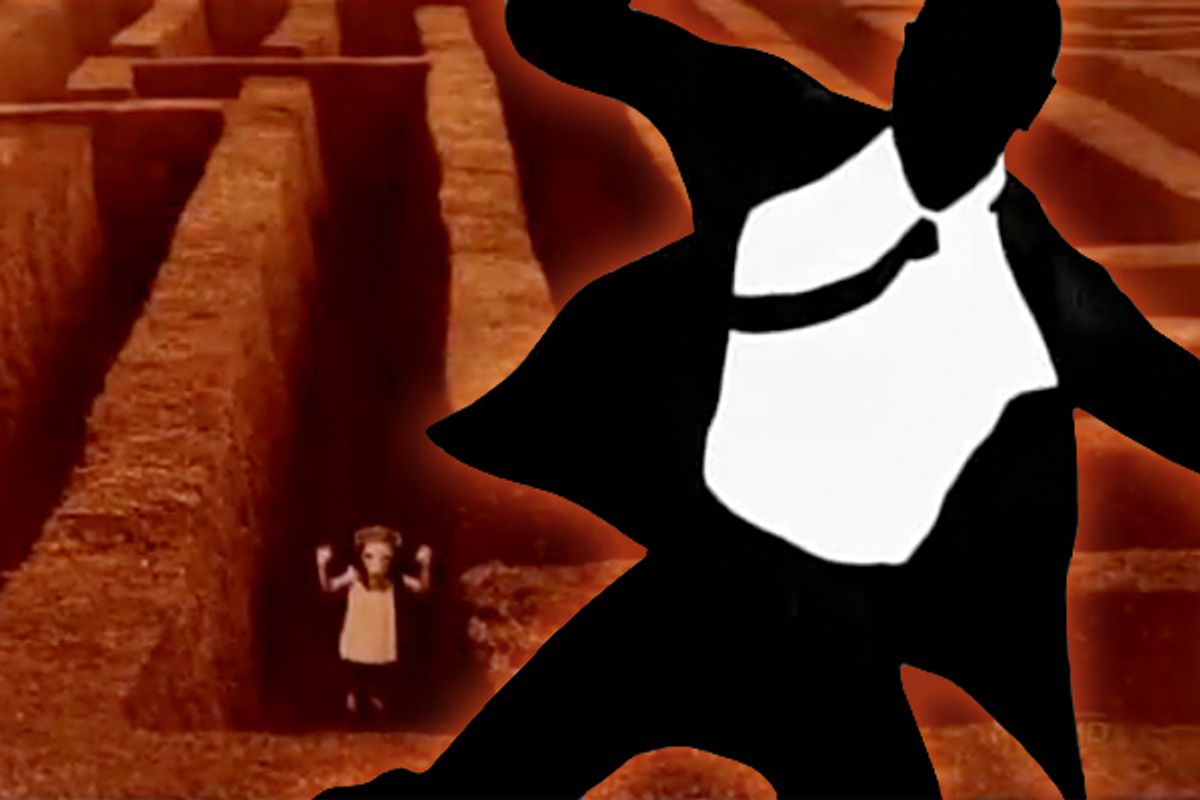 Clips from the opening sequences of "Homeland" and "Mad Men"
--

Twenty seconds into a tour of this gruesomely decorated cellar, our skittery camera feed abruptly cuts out and, with an accompanying crunch of industrial music that could only have been composed by some dude wearing a black trench coat, we’re visually assaulted by an image that will haunt us forever: Connie Britton’s name, typeset in a bold, gothic font.

Not that anyone should be surprised when wildly imaginative content turns up during a program’s opening credits; these days, eye-popping intros can now be found on virtually any channel not named C-SPAN. And they aren’t picky. You see them setting up everything from big-budget premium-cable series such as HBO’s “True Blood” and Showtime’s “Dexter” to cultish hits such as IFC’s “Portlandia” and FX’s “Archer.” Reality and talk shows have them, and they even cling like remoras to the carcasses of the recently departed, as proven with NBC’s “Chuck” and Fox’s “Human Target.” While there are still many opening sequences that are as irritating as anything that has graced our sets since the dark, final days of “Small Wonder,” it’s also true that some of the best work being done on television today occupies the space once reserved for cheesy cast montages and explanatory ditties written by Alan Thicke.

“A lot of television main titles, from a design standpoint and a typography standpoint, are [still] profoundly mediocre, because they’re for goofy, silly shows,” says Kyle Cooper, the founder of Prologue, the influential design collective behind the instant-classic “American Horror Story” opener, as well as the one fronting its somber cousin “The Walking Dead.” “But mixed in, there’s some good things that get through.”

An increasing amount, actually. For those of us raised on a gluttonous diet of the programs now found on TV Land and conditioned to expect little more from opening credits than “… and Jerry Mathers as the Beaver,” flipping around the dial can make us feel as if a brave new world has sprung up overnight. And, even though the art of main title design on television has, in fact, been in the midst of a full-blown renaissance ever since Tony Soprano took his first drive through northern New Jersey in 1999, the number of quality openers seems to have skyrocketed on the sly. How else to explain that, in just 20 years, NBC has gone from the corny third-season main title sequence of “Blossom,” with its unfortunate misuse of flowery hats and Joey Lawrence, to the inspired paper cootie catcher gimmick of “Community,” which not only reveals the cast members’ names but also contains appropriately immature jokes, such as a drawing of a topless stick figure lady? And how is it that, in 1990, the painfully hideous bumper promo for the hideously painful “Club MTV With Downtown Julie Brown” was nominated for an Emmy — in the same category won in 2008 by the sublime animated opening sequence for “Mad Men”?

I may still be suffering from the concussive blow dealt by the intro to “Suddenly Susan” -- a super-sized Brooke Shields stomping through San Francisco -- so forgive me if I sound groggy when I ask: How exactly did opening credits become essential viewing?

“You could make a few different arguments,” says Chris Billig, executive producer at TCG Studio, the firm responsible for, among many other things, the purposefully discordant main title sequence of Showtime’s “Homeland.” “But I would make the argument that as television has become a more creative medium, it has drawn better talent. A lot of feature guys are willing to get involved in the creative process of television now. When you have that transition, you ultimately have a higher bar for your creative delivery.”

In recent years, of course, a number of directors and actors more often associated with cinema have dipped their toes in the foreboding waters of series television: notables like Martin Scorsese and Steve Buscemi (“Boardwalk Empire”); Dustin Hoffman and Nick Nolte (“Luck”); and Don Cheadle (“House of Lies”). But it has been a slow build to get to the point where a hugely successful movie guy like David Fincher would be willing to commit to the open-ended rigors of episodic storytelling, let alone with two-time Oscar-winner Kevin Spacey in tow. A film-to-TV transition by an A-lister would have been hard to fathom even just a dozen years ago, when networks were still the primary source of entertainment on the small screen. But then came “The Sopranos.” Fueled by its unprecedented success, HBO and other premium outlets, which aren’t as concerned about advertisers or the FCC, began rolling out the welcome mats — and wheelbarrows of cash  —for creative types. A trickle-down effect soon extended to basic cable, broadcast television and beyond, and here we are at a moment in history in which a bidding war for the exclusive rights to air 26 episodes of Fincher’s upcoming political drama “House of Cards” ends with upstart Netflix ponying up $100 million.

With that kind of cash at stake, the folks from film have been arriving in droves. And not surprisingly, they’re refashioning television in their own image. “In features, people realize that every minute of screen time is precious,” says Cooper, who became a hero of typography fetishists everywhere for his meticulously crafted title sequence for the 1995 Fincher mindbender “Se7en.” “The titles can do more than just setting up people’s names.”

Like many others in his field, Cooper subscribes to the philosophy popularized by Saul Bass, who almost single-handedly created the art of main title design in the 1950s and ’60s with his stylized sequences for Alfred Hitchcock (most notably “North by Northwest”), Stanley Kubrick (“Spartacus”), Otto Preminger (“The Man With the Golden Arm”) and other auteurs. His theory: “You try to reach for a simple, visual phrase that tells you what the picture is all about and evokes the essence of the story.”

Evocative brevity is very much on display in Cooper’s masterful opening credits for “The Walking Dead.” In just 35 seconds, viewers learn pretty much everything they need to know about the series — namely, that it’s a creepy, yet frustratingly slow-moving, zombie drama set in a post-apocalyptic world in which the zombies are rarely the focal point.

Bass’ philosophy is also in play during the opening sequence for “Boardwalk Empire.” Karin Fong, a director and designer at industry alpha dog Imaginary Forces, worked closely with series creator Terence Winter to find the best way to clue in savvy HBO audiences to the world they’re about to enter. Ultimately, they decided on an impressionistic approach that might have left Sherwood Schwartz scratching his head: shots of Steve Buscemi, dressed in period garb, standing alone on a beach surrounded by bottles of liquor. “I think many of the best titles don’t duplicate what is shown in the narrative that follows but instead serve to intrigue and pull in the viewer with emotional impact,” says Fong.

Essentially, she’s talking about content branding, or creating images that will emotionally adhere viewers to a particular show, a once-flourishing technique that had been in hibernation on television for many years. During Saul Bass’ heyday, visually compelling intros weren’t uncommon (e.g., the cartoonish opening for the 1965-69 CBS series “The Wild Wild West”). But with rare exceptions — “Miami Vice,” for one — networks went in a different, more utilitarian direction with opening credits in the 1970s and ’80s. “Maybe people chose not to put their money into that part of the show, or they forgot that you can do a lot of other business there,” says Cooper (who, perhaps not coincidentally, did the main titles for the 1999 film adaptation of “The Wild Wild West”).

Business, of course, explains the general trend over the last few decades, especially on networks, of marginalizing opening credits. You can’t blame the suits for wanting to truncate the stale convention in favor of a few more seconds of advertising space each week. By the mid-1980s, main title sequences on television had become entirely predictable: neatly explain the premise of the show or the characters in 30 seconds or less, hopefully via an insidiously hummable theme song, à la the ragtime “Mr. Belvedere” tune that still rattles around in my head daily and drove one should-be YouTube star crazy enough to lip-sync it while sitting on the toilet. Even programming honchos knew that, by and large, opening credits had become something to skip over — or, worse, given how rapidly the cable universe was expanding, something to flip away from. The fear of viewer flight got so bad that one fed-up ABC executive, perhaps after seeing the intro to “Full House,” suggested that the network eliminate them all together.

In the late-1980s, when “It’s Garry Shandling’s Show” savaged tired openings on his groundbreaking Showtime series with lyrics that literally went “This is the theme to Garry’s show/The opening theme to Garry’s show/This is the music that you hear as you watch the credits,” the death knell had tolled for earnest title sequences. Producers who wanted their shows to land with Gen X — the target demographic advertisers coveted most at that time — needed to inject them with winking humor (e.g., “The Fresh Prince of Bel-Air”), genuine genius (David Lynch’s iconic lead-in to “Twin Peaks”) or extreme brevity (“Murphy Brown,” “Seinfeld” and “Frasier”). For the networks, the last technique resulted in slight upticks in viewer retention and ad revenue, and helps explain why shorter titles and cold opens are so prevalent on broadcast television in 2012.

“At the end of the day, the networks are about selling soap and shampoo and stuff like that,” says Billig, whose company worked with J.J. Abrams to devise the famously brief “Lost” sequence. “There’s always the question of ‘How much time do we allow for the main title?’” In the case of “Lost,” the answer is 12 seconds.

Since it’s unlikely that the networks will ever be able to greenlight show openings as daring as the ones increasingly found setting up the likes of “American Horror Story” and other cable shows, and since the threat of viewer retention still gives them nightmares, maybe ABC and its broadcast rivals should strive to lead the charge in a promising sub-development: main title sequences that change from episode to episode. “Weeds,” for instance, produces a completely original vignette each week that not only cleverly incorporates the show’s title but also hints at the content of the episode. The ridiculously ornate maps concocted for the “Game of Thrones” opening sequence, which won the prime-time Emmy for outstanding main title design last September, change from episode to episode, depending on where the action takes place. Of course, those perpetually watchable credits sequences are just variations on a hugely successful long-running gag from a network show. What fan of “The Simpsons” hasn’t sat through the opening credits hundreds of times to see what Bart Simpson writes on the chalkboard or what happens with the couch?

For now, those of us whose brains are still playing “The Brady Bunch” earworm on repeat can rest easy knowing that the trend toward more visually sophisticated opening credits should prevent the unironic explanatory theme song from making a comeback — although Zooey Deschanel’s adorkable throwback “New Girl” intro is a near-miss. Of course, this may dismay fans of shows sporting inscrutable main title sequences, and fans of camp, for that matter. In other words, “Homeland” viewers shouldn’t expect to hear Claire Danes rhyme “She knows her Hezbollah” with “Despite being bipolar” when the show returns for Season 2.

“That would be awkward,” says Billig.