As the Season 2 finale arrives, an obsessive mourns that her favorite show is now just another ridiculous soap 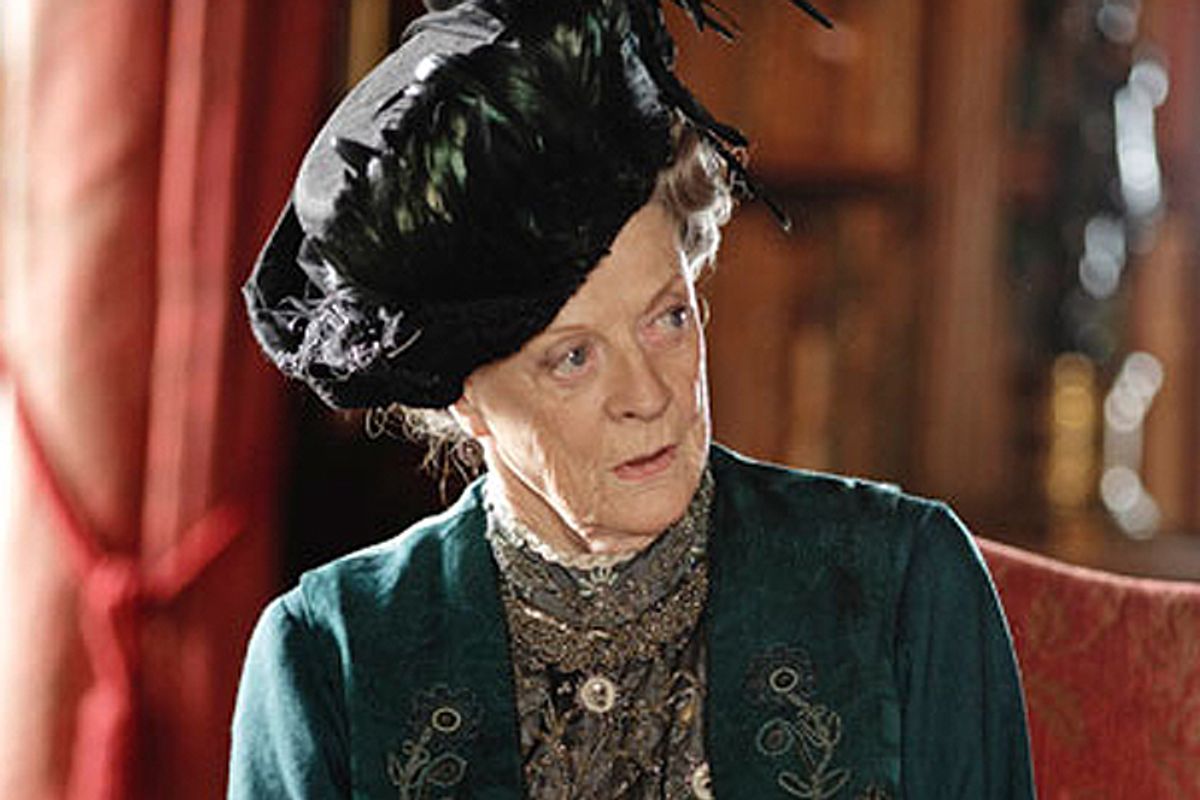 I have a confession to make. "Downton Abbey" is getting on my nerves. This will be taken as heresy in some circles. More specifically, it will be almost treasonous in my own circles. But it’s become harder and harder to sit through the episodes of Season 2 (which concludes tonight) without feeling the need to constantly apologize — to my husband, in particular — for its excesses.

Let me be clear. I remain an avid fan. I loved "Downton Abbey" from the first moment I laid eyes on it. The lustrous sets. The gorgeous costumes. I could watch the upholstery on that show for an hour and be satisfied. Each month that passed between the end of Season 1 and the start of Season 2 brought a small heartache. I squealed just a little when the swelling violins took up again in January.

What’s changed is that "Downton" is now just another melodrama. What so many viewers fell in love with was not just the setting, or the clothes, or Lady Mary’s magnificent eyebrows (which, I’d like to note, deserve an entire plotline to themselves). It was the complexity of the whole. There was an attention to detail in Season 1 that drew the viewer into its world. So much of what made the show work could only happen in that house, during the years of 1913-1914. It gave the story an authenticity that made the experience akin to reading a novel instead of watching a television show. There was the housemaid who dreamed big and wanted to become a secretary. The Irish Socialist who somehow lived with the cognitive dissonance of serving as a chauffeur in an English estate. The middle-class lawyer thrust into the middle of the aristocracy. The closeted footman who couldn’t find any outlet for his passions.

It was all fantastic upstairs/downstairs stuff. Picking up where he had left off in "Gosford Park," Julian Fellowes fleshed out the world of the manor house. Sure, there were the love affairs. Feckless, often cruel Mary played with Matthew’s emotions, but their relationship served a larger purpose. We saw the traps of upbringing and expectations in her conflicted feelings about marrying him. We experienced his confusion and wounded pride at being turned down when it seemed he wouldn’t actually inherit all the money.

Which is why, perhaps, "Downton Abbey" was appointment TV for my husband and me, two people whose  tastes rarely coincide. He watches sports. I watch upholstery. But as the season has progressed, the groans  from his end of the couch have gotten louder.

I knew we were in trouble during episode 4, when Matthew, feared captured or worse during the war, showed up unannounced in the middle of a concert for the recuperating officers and walked up the aisle, singing. There is no surer sign that a TV show has turned the corner into shameless soap opera than when a man walks up an aisle toward the woman he has jilted, leading the wounded in song.

Melodrama in and of itself is not a problem. The genre has a long and storied history, although it is not usually embraced by those with middle-brow pretentions as assiduously as "Downton Abbey" has been. "Uncle Tom’s Cabin" is nothing if not melodramatic, and it ignited the Civil War, at least according to Abraham Lincoln.

And let’s be honest, "Downton Abbey" has been a melodrama from the start. Set in a distant and unknown (but still familiar enough) culture whose customs and mores are foreign to us, Season 1 featured a family in peril, star-crossed lovers, evil machinations, the works. It’s an irresistible combination that writers have gone back to over and over again, from Gothic novels like "The Castle of Otranto" to vampire lit.

Season 2 does have some stalwart holdouts. The Dowager Countess’ tongue remains as tart as ever upstairs, and Mrs. Patmore still grounds the downstairs world with her earthy, observant candor. Beyond that, what’s left is the most basic, pedestrian soap opera. Sure, we’ve seen World War I and the Spanish flu, but as the season has evolved, everything and everyone has become merely contrivances to propel the sudsy plot. It’s gotten so that "Downton Abbey," which used the conventions of the soap opera to such great and subtle purpose before, seems to check off each outlandish mark as it goes. Miraculous nonparalysis! Stolen kisses! Overheard conversations! Pretty young woman dead of a broken heart! Murder most foul!

More and more characters — especially the female ones — have become nothing more than useful plot points. We saw something of this in Season 1. Mary’s Turkish lover, for example, was ushered in and out quickly. The difference is that he had an immediate impact — the look of incredulity on Mary’s face when Pamuk suggests that his family would look down upon a match with her is still, to my mind, one of the series’ finest — and lasting importance. His visit, and his death in her bed, still haunt the show.

It’s hard to see how the presence of Jane, the housemaid conjured as if to fill Lord Grantham’s lonely, frustrated fantasies, will continue to resonate. And Lavinia, who finally acquired a scintilla of personality, had to be dispatched so that she’s not in the way of the real story anymore.

Other characters have gotten more one-dimensional, too. Where is Branson’s political fire? All he did for most of this season was stand around the garage mooning over Sybil. She’s proved herself worth it, but he has been reduced in the process. The new maid, Ethel, is a descendant of Tess of the D’Urbervilles and every disgraced relative in Jane Austen’s novels who give into physical passion and are punished for it. Whereas Gwen aspired upward to the heights of secretarydom, Ethel’s dreams are thwarted in the most conventional, and most sensational, way.

Most disappointing is how good everyone is turning out to be. The bitchy Mary, who would string a man along for money without a second thought, now spends most of every episode crying over her lost love. Taciturn Bates, who was so cut off — physically and emotionally — from everyone else, has been turned into a puppy dog in love. The bite is gone. The flawed characters we all loved, or loved to hate, have been flattened by niceness.

There is still a lot of drama to be mined from the characters and situations set up by "Downton Abbey." England in the 1920s is still as foreign to us as it was in 1913. I will continue to watch. I want to see how Bates’ trial turns out. I hope Fellowes uses it as an opportunity to show us how justice was meted out back then, and how class plays a role in the proceedings and the verdict. I want to see how Sybil adjusts to the plebian life, and to be there when Matthew and Mary finally get together. Which they will. This is a melodrama, after all. Fantasy and wish-fulfillment have to play their parts. The beauty of "Downton" was that it made room for that while still giving viewers a meaty, layered look at a fully conceived world. Watching upholstery had never been this exciting.