The one-way flight back to Guatemala is a trip no unauthorized immigrant wants. But some take it over and over 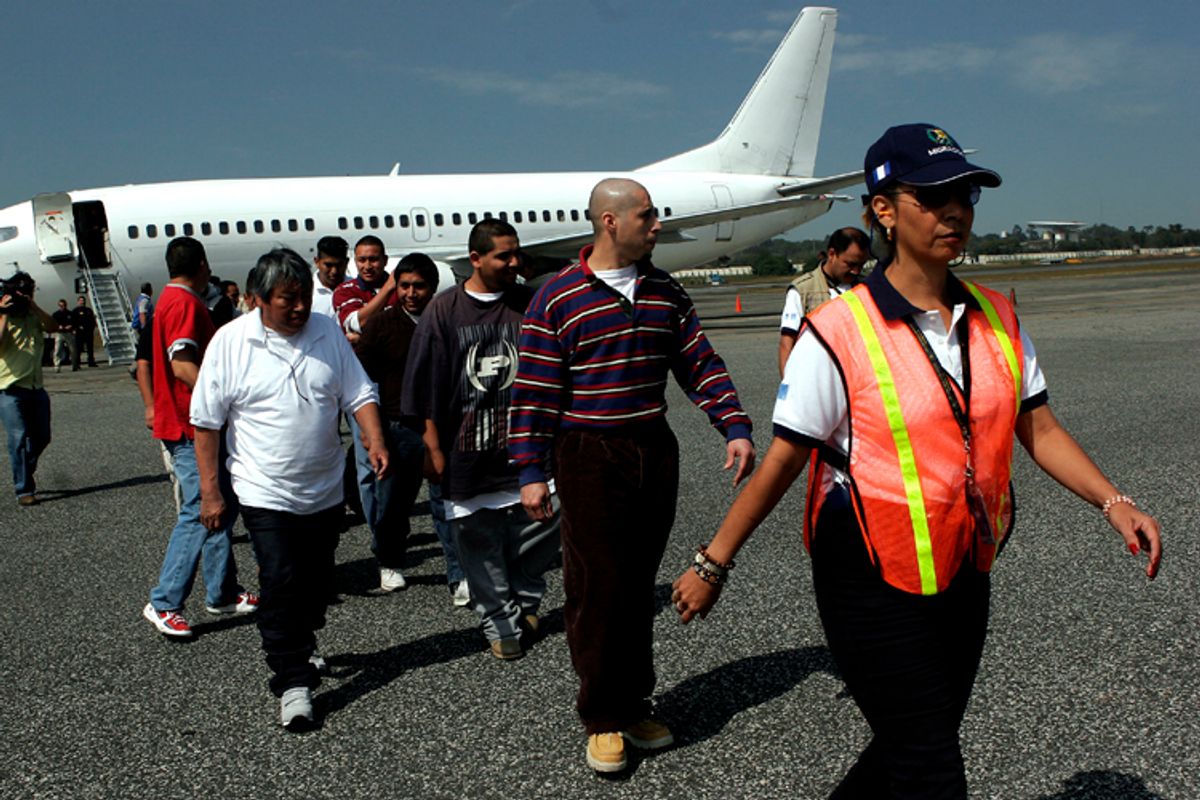 Guatemalans deported from the United States are escorted by an immigration official upon their arrival at La Aurora International Airport in Guatemala City. (AP/Moises Castillo)
--

GUATEMALA CITY -- “No one will throw you out of here,” says the woman with the jaunty ponytail and the cheer of a motivational speaker. “Here we’ll give you affection.” Then she sends some love in the direction of Guatemala, the ostensible home of the bleary-eyed deportees who have just descended from U.S. government-funded flights a few feet away. “Our volcanoes! Our mountains! Everything we have!”

By the time she gets to the tortillitas and tamales and call-and-response, the deportees -- the vast majority of them young men, a handful of them minors -- are smiling. Some of them even wink and flirt. This may well be the least exhausting part of their journey.

“Together, we’ll work to do what we can to help the country rise,” continues the greeter, a Guatemalan government employee meeting her third plane of deportees today. She’s poised with a wireless mic before a banner reading, “You’re already in your country with your people” in Spanish and Kekchi, a Mayan language.

But any enthusiasm transmitted to the deported, who then shuffle out the door carrying their earthly belongings in thin, transparent plastic bags, is often temporary.

“Some of them get on a bus here and go right back to the border with Mexico to cross again,” says Jorge, one of the employees here with the International Organization for Migration, which has a table set up just outside the holding room with telephones and transportation assistance. He is standing by the first of a series of one-way doors, handing out energy drinks. “Some of them have never been to the capital, or they don’t know how to speak Spanish because they’ve spent their lives in the U.S.” There are usually familiar faces among the pack; he saw one man who claimed to have been deported seven times.

Their initial needs are practical: changing Mexican pesos or U.S. dollars, figuring out if their families are on the other side of the iron door being guarded by a baby-faced, heavily armed soldier, getting a ride. After that, reintegrating from one of the wealthiest countries in the world to a country where 51 percent of the population lives on less than $2 a day, one beset with violent crime, is more complicated.

But more than ever, this return trip is the reality for migrants. Last year, the United States deported more undocumented migrants than ever in history, nearly 400,000 of them, a number that has skyrocketed from a mere 7,029 in 2004. After Mexicans, Guatemalans made up the largest group of deportees, with about 29,000 “forced returnees” by air. Another 28,000 were deported overland from Mexico. An estimated 1.3 million Guatemalans live in the United States, equal to about 10 percent of the Central American country’s population, and remittances – money sent home by migrants – regularly make up about 10 percent of GDP.

The surge in immigration enforcement, and in tools designed to ramp it up, began under President George W. Bush but has expanded under Barack Obama's administration, a fact not lost on pro-immigration advocates, some of whom are refer to it in Spanish as the “deportation administration.” The strategy has been to target “criminal aliens,” rather than, as Obama himself put it, “folks who are just looking to scrape together an income." In fiscal year 2011, 55 percent of deportees had been convicted of a crime, compared to 31 percent when Obama assumed office. That said, the Association of Immigration Lawyers of America (AILA) has pointed out that the Department of Homeland Security “made no distinction between people convicted of petty misdemeanors and violent felons, putting a person convicted of loitering on par with a drug kingpin.”

In a June memo, Immigration and Customs Enforcement Director John Morton said that pending deportation cases would be subject to “prosecutorial discretion,” meaning that special consideration would be given depending on family situation, length of time in the U.S., and so on. And President Obama also supports the DREAM Act, which would give a path to citizenship to young immigrants who were brought to the country as minors and are enrolled in the military or college but has repeatedly failed in the Senate. Meanwhile, intra-Republican discussions on the topic have in the past year ranged from Herman Cain suggesting Great Walls with alligator-filled moats, to Rick Perry coming under fire for supporting a Texas version of the DREAM Act, to Mitt Romney advocating "self-deportation."

The Obama position seems to be trying to have it both ways: seeming tough on enforcement while suggesting humane, if narrow, accommodations. But according to a November survey AILA conducted of its members, “the overwhelming conclusion is that most ICE offices have not changed their practices since the issuance of these new directives.” Indeed, a recent report by the Applied Research Center estimated that 5,100 children are in foster care because their primary caregivers were deported; another report by the University of California at Berkeley Law School found that about one-third of the 226,000 immigrants deported under “Secure Communities,” a program that links local law enforcement to immigration status, had spouses or children who are U.S. citizens.

That includes men like the one who gave his name as Armas, deported from the last plane this February afternoon. It’s his first time back in Guatemala in 17 years. He’s left a wife and five children, including a newborn, back in New Jersey, all U.S. citizens. He thinks he was either 15 or 17 when he left, he isn’t sure. He says he was deported because in 1995, he was “drunk and stupid” and got a criminal record, though he declines to elaborate. What waits for him outside the gates, he isn’t sure – and anyway, he plans to be back in the U.S. soon.

Anastasio, 21, says he managed to stay in the U.S. for four years, working as a cook in a Mexican restaurant in Virginia until getting deported last summer. In December, he decided to make the crossing again. “I didn’t need a coyote, because I remembered the way,” he says. It was much harder the second time, he said. And that time, he was deported on the same day he entered the United States, after getting caught in a convenience store in Tucson, Ariz. He spent Christmas in detention. “I love Guatemala, but I had to get out for a better future,” he shrugs. His girlfriend is waiting for him back in Virginia, he says.

Anastasio can’t find the phone numbers for his family, who live in the northern lowlands of El Peten – he had them pinned to his pants, he says, but they didn’t make it through detention -- and he has no idea where to reach them. So today he’s going to hop in the van for Casa del Migrante, a Catholic shelter in Guatemala City’s Zone 1 that hosts the most desperate cases.

If migrants come legless, says Father Francisco Pellizari, the Argentine-born priest who runs the shelter, they can stay a few months at Casa del Migrante. Train accidents in crossing Mexico are common enough that the center has a prosthesis expert on call. More often, the migrants get psychological counseling and legal counseling. Migrants can arrive traumatized, he says, either from harrowing experiences, like rape, assault, or being trafficked, during the crossing, or from the shock of their detention and deportation. (The consensus, unsurprisingly, is that it’s better to be detained in the U.S. than in a Mexican prison.) Migrants will often mortgage whatever possessions they have – usually land in the countryside, or their home – on the informal market at usurious rates, and if they get deported before they can earn much money, they return facing not just a sense of failure but also an enormous debt.

Casa del Migrante opened its receiving program in the Guatemala City airport last April in response to the jump in deportations; it works with the IOM, which in turn gets USAID funding for some of its reintegration programs. There are three Casas del Migrante in Mexico, and one more in Tecun Uman, a Guatemalan border town. (The organization publishes a magazine, the most recent issue of which contains a stinging critique of Obama administration policies and, in the back, a word puzzle -- you have to find words like “crisis” and “security” -- and a maze in which you “help a lost migrant” – a silhouette with a backpack --  “find the way home.”)

Pellizari spent 14 years in the Mexican shelter, but says, “Here in Guatemala it’s worse, because there are even fewer opportunities. There are no jobs.” They can help with the first few weeks or months, but the long-term is beyond the resources of either the first-aid nonprofits or the existing Guatemalan governmental efforts. An IOM official told me they have helped 3,000 migrants with “social reintegration,” but said job placement services had so far managed to help only about 20 people find jobs, though more may have found employment on their own.

From what Pellizari is seeing, the migrants are undeterred by increased deportations or a tougher economic situation in the United States. Sometimes, he says, migrants’ families in Guatemala will even send what money they can to an unemployed relative in the U.S., a remittance in reverse to help them hang on until things improve.

Meanwhile, this month the IOM is collaborating on an ad campaign, mostly on local radio stations, in Guatemala and Mexico, trying to discourage people from migrating by discussing the significant risks and dangers in crossing the border. It can understandably be a touchy subject, not just with the government but with the average Guatemalan.

Miguel, a Guatemalan working in the tourism industry, told me he welcomed the spike in deportations. “They belong here with their families,” he said. “Only the greedy migrate.” In some towns, he claimed, men were marrying two women to meet the shortage of available husbands.

When tourists praise the more lavish houses that dot the side of the road – usually, the ones with more than one story – he says he tells them cheerfully, “That’s your money.” Besides, he says, all of the women who make the crossing get raped. He even knows a Mexican truck driver who smuggles women across the border. He bragged to his Guatemalan friend that he has the best job because he gets to “have sex” with a different woman every night. “He rapes them,” Miguel said, in case it wasn’t clear. (Among deportees, women commonly make up only about 5 percent.)

One 18-year-old Kekchi Mayan girl, Loita, has heard the stories – her parents told her about how women are raped by coyotes and narcotraffickers to try to get her to stay home. She even has a cousin who made it across the border that way. “I asked her how she could sleep with some man she didn’t want to sleep with,” she told me. “She said she just closed her eyes and thought about her family.” But she insisted she would migrate someday anyway. “I want to make my dreams come true,” she said. One American tourist she told this to, she recalled recently, asked her why on earth she’d want to leave. After all, the lake she lived near was so beautiful. Wasn’t that enough?

Back at the airport, another deportee, Oscar Gonzalez Mejia, knows his way around well. He spent eight years working in the United States, mostly in Maryland. But after getting deported last year, he was lucky enough to find a job -- working for the IOM, greeting and helping fellow deportees. These days, it's a growth industry.