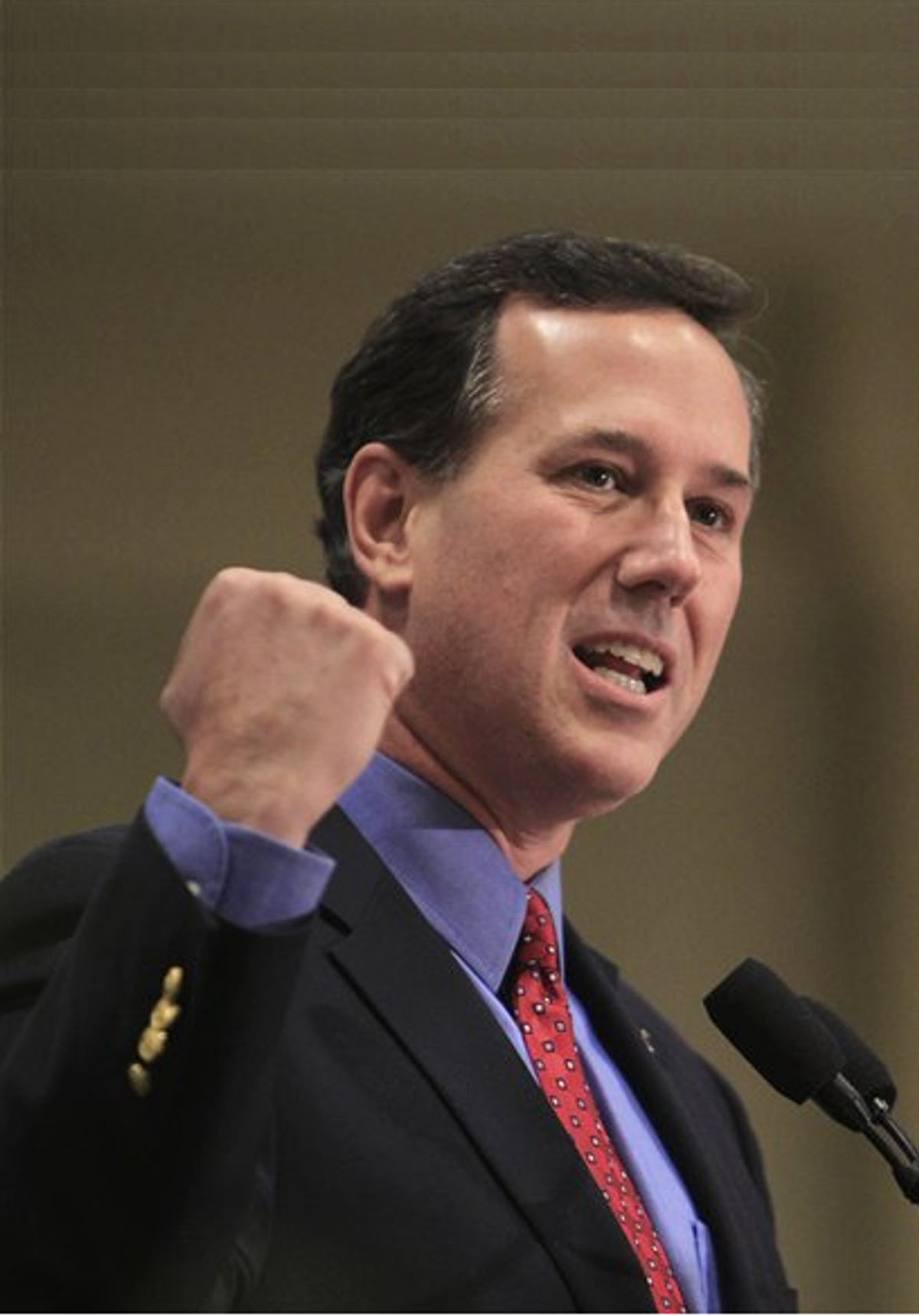 For decades, the center of power in the Republican Party has been shifting southward, and the concentration of evangelical Christians within the party has been rising. So there's some irony in the fact that as a series of crucial primaries in southern states approaches, the GOP race has, at least for now, become a two-man fight between a Mormon from Massachusetts and a Roman Catholic from Pennsylvania.

That Mitt Romney faces particular suspicion from the evangelical voters who have come to dominate southern Republican politics is old news. In his 2008 campaign, the former Massachusetts governor tried to run as the right's default non-John McCain choice, a strategy that made Dixie crucial to his efforts. But in one southern state after another, Romney lagged badly among evangelicals (many of whom flocked to Mike Huckabee), preventing him from posting the breakout victories he badly needed. And so far in this campaign, polls suggest that the South remains unusually hostile to -- or at least skeptical of -- Romney.

The assumption is that Romney's Mormonism plays a significant role in this. The bulk of southern evangelicals are Baptists and Pentecostals, who tend to be extra-resistant to the idea that the Mormon and Christian faiths are at all compatible and who may be extra-reluctant to vote for a candidate they consider so fundamentally different from them. As Robert Jeffress, the Texas Baptist leader who has called Mormonism "a theological cult," put it a few months ago, "to those of us who are evangelicals, when all other things are equal, we prefer competent Christians to competent non-Christians who may be good, moral people like Mitt Romney."

So with upcoming primaries in Georgia, Oklahoma, Tennessee, Alabama, Mississippi and Louisiana, there's a real opportunity for Rick Santorum to harness this Romney resistance and do some real damage. But because of his northern Catholic background, Santorum isn't a natural fit for southern evangelicals either.

So far, Santorum's success has been limited to the Midwest, where he's won contests in Iowa, Missouri, Minnesota and Colorado. But in South Carolina, he netted just 17 percent, good for a very distant third place, and in Florida he finished with 13 percent. In both states, evangelicals were more interested in Newt Gingrich, a Catholic convert who at least has southern political roots, than Santorum. And now that he (or, more precisely, the super PAC that's aligned with him) is armed with another $10 million of Sheldon Adelson's money, Gingrich poses a threat to Santorum's southern hopes. If evangelicals really are more comfortable with the former House speaker and see him as viable, it could split the conservative vote throughout the South and open the door for Romney to win states with well under 50 percent of the vote.

Against this backdrop, the stir that Santorum caused over the weekend, when he claimed that President Obama is advancing "some phony theology," takes on new significance. Santorum later claimed that he was actually talking about environmentalism, and not religion, but whatever his intent, the controversy could have the effect of strengthening his bond with evangelicals, particularly those in the South. Santorum also suggested that Obama practices a different form of Christianity and, in a separate weekend appearance, talked up the virtues of home-schooling. In a way, this was Santorum delivering a simple message to conservative evangelicals: I'm one of you. And it's the kind of rhetoric that Romney, who has been trying to keep one eye on the general election, isn't nearly as comfortable employing.

Gingrich's success in South Carolina and the Florida panhandle suggests that Catholicism by itself isn't enough to keep southern evangelicals from viewing a candidate as a "true" conservative. Santorum has the added obstacle of his northern roots, but there's reason to believe he could run well -- very well -- in the Deep South in March. He'll need to retain his viability (meaning no meltdown in Michigan) between now and then, but if he does, the red meat he tossed out this weekend should be very helpful.

Here's a look at the Southern states that will vote in March. The first number is the share of GOP primary voters who identified themselves as evangelicals in 2008; the second number is the share of the statewide vote Romney received in '08. Note that Virginia, which votes on March 6 and where 46 percent of the '08 primary voters were evangelicals, isn't listed, since Santorum failed to make the ballot there.

***Romney dropped out before state voted