A Grammy sensation is cheered for her \"authenticity.\" Coming next: Dour, humorless copycats invade the pop charts 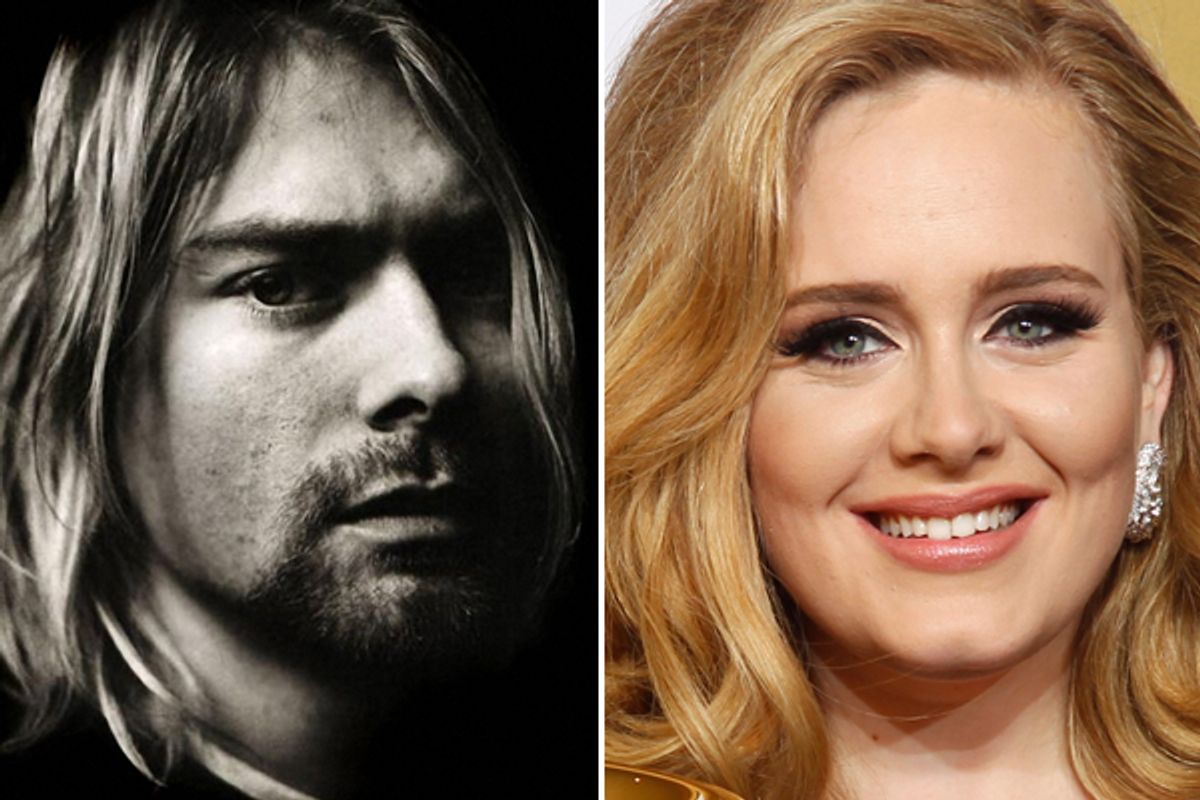 With her armload of Grammys, three nominations for tonight's Brit Awards and a stack of platinum albums, England’s Adele reigns over pop music at home and abroad. “Someone Like You,” the closing track of her 17-million-selling album "21," is arguably the past year’s signature song, widely hailed – as is all her music – for its “authenticity.” But beyond its piano-and-voice starkness, it sounds like, well … 1992.

The song’s quiet/loud structure, its nakedly personal lyrics, and Adele’s aggressive, cathartic yawp in the chorus are all hallmarks of grunge-era rock. And authenticity, that elusive concept, is what Kurt Cobain was said to embody 20 years ago. As a resolutely working-class singer who penned songs about psychological pain and refused to conform to a stereotypical pop-star image, he was seen as a beacon of “realness” in an era of manufactured pop. The same could be said of Adele. If her success is any gauge, we’re entering a new era where displays of “authenticity” will be de rigueur. Let’s just hope it doesn’t do away with fun.

The early ‘90s fetishization of authenticity arose at a time when R&B-flavored dance confections by C&C Music Factory and Paula Abdul topped the charts, and even the über-sincere U2 embraced electronics and irony. Revelations that Milli Vanilli had lip-synced their way to a best new artist Grammy led to album-burning and an S.O.S. for artists who believed there was nothing better than the real thing. Enter Kurt Cobain.

Nirvana’s breakthrough single, “Smells Like Teen Spirit,” was an attempt to emulate the arty rock of the iconoclastic Pixies, but it was received as the raw sound of disaffected youth. Cobain bought into his own mythology: He professed to feel “a duty to warn the kids of false music that’s claiming to be underground,” citing the “corporate” Pearl Jam as a prime example. Authenticity, as Hugh Barker and Yuval Taylor point out in their book "Faking It," is “an absolute, a goal that can never be fully attained,” and Saint Kurt, the idealist, went “to tremendous lengths to ‘keep it real,’ to rebel against commercial expectations, and to expose his problems to the public.” At least Cobain had a sense of humor; after his suicide, however, his devotion to “rawness” became elevated to orthodoxy, adopted as dogma by a host of moaning miserabilists who delivered wave after wave of angst-soaked grunge and grunge-lite.

From Puddle of Mudd to Staind to Creed to Nickelback, the yarling grunge descendants replaced rock’s devil-may-care excitement with blazoned earnestness and sludge. In doing so, they forced a schism between rock and pop, two forms of music that, in terms of style, at least, had been creeping closer together over the course of the ‘80s. It took bands like the White Stripes, the Strokes and the Hives, in the early ‘00s, to bring self-awareness and fun back into rock music. Despite their own assertions of what Barker and Taylor would call “cultural” authenticity (or adherence to a well-defined tradition) in rock ‘n’ roll, they were self-consciously contrived: Theirs was authenticity at one remove, a stylistic decision.

In recent years, stylistic dogmatism has largely receded, and genres have intermingled freely; a rapper like Lil’ Wayne can sing through heavy Auto-Tune (a device beloved in pop and dance music) to produce a rock album ("Rebirth"). But high seriousness has once again started to creep in, as even former enfant terrible Eminem now delivers introspective lyrics with emo choruses, while the latest hip-hop superstar Drake shows us it’s best not to celebrate success without maudlin self-critique.

Cultural reasons for this broadcasting of inner turmoil might include the recession and Facebook-induced oversharing, but it may also be due to the cyclical nature of fashion and popular music, where each new trend reacts against the last; as flannel makes a catwalk comeback, it’s natural that “authenticity” should do so as well. Adele, clearly, is at the vanguard of such supposed bald, unmediated self-expression, and for her critics, this is integral to her appeal: She’s “a real person, with real music” (New York Examiner); a champion of “authenticity and old school talent in a sea of Auto-Tuned belly buttons” (Toronto Star); and “authentic because she is her own creation” (Daily Telegraph).

Her antithesis is widely held to be public whipping-girl Lana Del Rey, who (horrors!) has changed her name, gussied up her image, and dared to be somewhat theatrical; by implication, if she had sung her songs (which sound like anemic, monochrome versions of Adele’s glummest balladry anyway) as Lizzy Grant of Lake Placid, all would have been forgiven. And where one might expect dance-pop stars to challenge Adele’s pervasive earnestness, they’ve instead been joining her: Taio Cruz and Katy Perry, for instance, have delivered straight, po-faced covers of “Someone Like You.” Where authenticity has historically been the province of rock rather than pop, Adele’s crossover appeal extends its reach.

Adele-worship has, however, been greeted with some suspicion in her native England, where she has been seen as the standard-bearer for an artistic “movement” dubbed the New Boring, with her erstwhile tour mate, soul singer Michael Kiwanuka, cited as an acolyte. Undeterred, fellow English singer/songwriter Ed Sheeran has affirmed, “If Adele's seen as boring, then I'm happy to be boring as well,” and in the wake of Adele’s Grammy sweep, Jessie J, who once sang, “Why is everybody so serious?,” has vowed to pare down her live show in order to prove she’s “real,” as “The English … can sniff a fake very easily.”

But exactly how “authentic” is Adele anyway? She’s a big fan of the Spice Girls, devotees of Auto-Tune and miming who, she has claimed, “made me who I am.” Her musical style is highly derivative of American soul music, with a smattering of heartbroken country. And the “highly personal” songs on "21" were written in collaboration with the likes of Ryan Tedder (Backstreet Boys, Sugababes), Fraser T. Smith (Britney Spears, Taio Cruz), Francis White (James Blunt, Take That), and Greg Wells (Mika, Katy Perry).

Not that there’s anything wrong with any of this. Rather, it’s the concept of authenticity itself that’s problematic, especially when it’s linked to “honesty” and “sincerity,” which are easy to assert but impossible to prove, and to a serious mode of “expressing oneself,” which admits of no irony – and therefore no humor. And Adele is capable of both: On "21," the cheeky stomper “Rumor Has It,” for instance, opens with the lines “She ain’t real,” describing a love rival, but later suggests that the singer ain’t exactly what she seems: “You made my heart melt, yet I'm cold to the core.”

Authenticity is as much a pose as it is a state of being, but we’re conditioned to value it nonetheless. What if Adele, who has recently claimed she’s “never writing a breakup record again,” were to release her next new album under a pseudonym and fill it with peppy, Auto-Tuned dance numbers? Nevermind, we’d find someone like her.