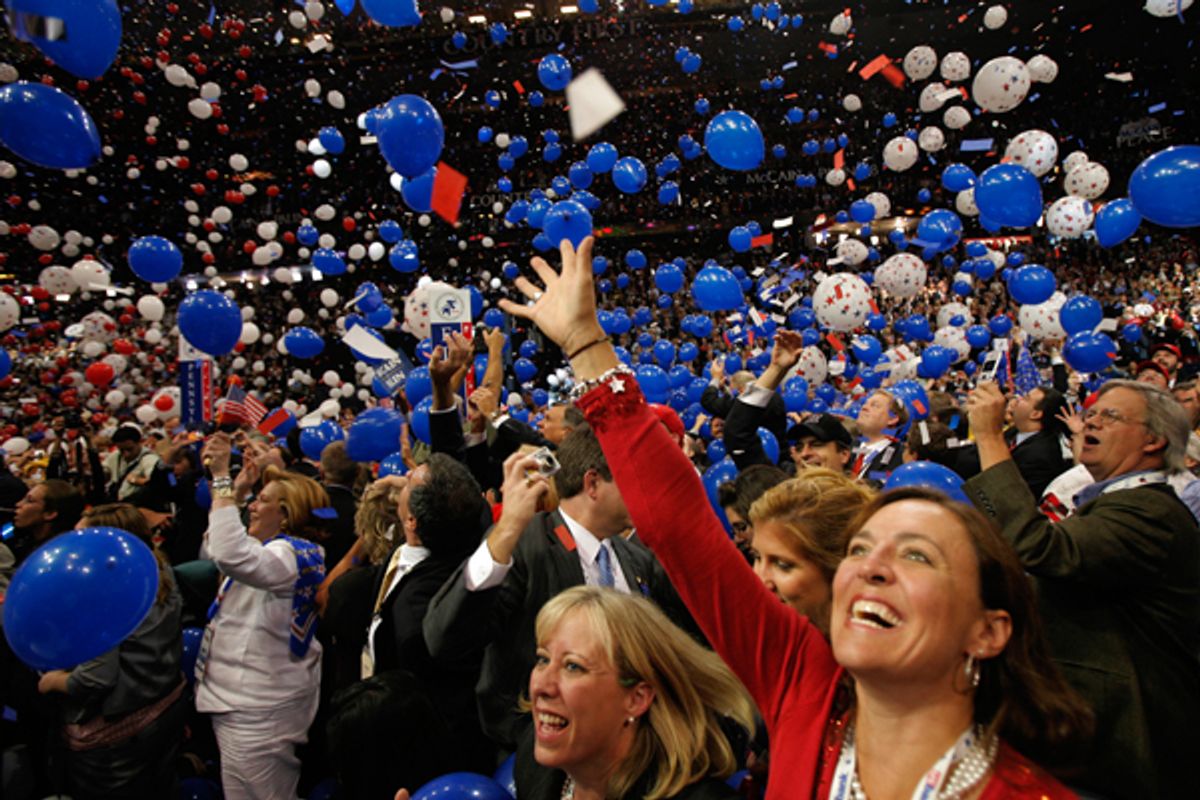 Republicans, be careful what you wish for (AP/Jae C. Hong)
--

Some Republicans, dissatisfied with their candidates for president, have taken to openly pining for a deadlocked convention to solve their problem. Weekly Standard editor Bill Kristol wants a "deliberative"conclave in Tampa, Fla., this summer. Former Alaska Gov. Sarah Palin says if it happens, she wants to "help."

They should be careful what they wish for.

In the modern era since the nomination process was reformed before 1972, we’ve never had a real contested convention, and the institution that we have today isn’t built for deliberation and decision making; it’s built to formally ratify a decision made months before, and then serve as props and extras for the nominee’s multiday TV extravaganza. If the delegates were suddenly forced to make a decision, it’s not hard to imagine some of the nightmare scenarios that might develop.

Imagine, then, that Newt Gingrich really does stay in and win delegates, especially in the South; that Ron Paul’s delegate strategy is wildly successful; and that Mitt Romney and Rick Santorum split the rest; and that the delegate count after the last primary stands at Romney 700, Santorum 650, Paul 450, Gingrich 400, with a hundred or so automatic delegates and formally unbound caucus state delegates remaining uncommitted. No one is close to the 1,144 needed for nomination as the delegates arrive in Tampa.

What happens then? Remember, the conventions are essentially the governing body of the political party. They have rules, but if they choose to change those rules there’s really no one (not the Republican National Committee, not the courts) who is going to prevent them from doing so. The majority of the convention, ultimately, is responsible only to itself. And unlike the old days, when many delegations were simply creatures of a state party chair and the individual delegates would do whatever the chair said, the delegates now would be over 2,000 free agents. They might follow the orders of the candidate they were pledged to, or not; some of them might choose to follow some other party leader. Most of them, however, would be free to choose, with little or no professional or personal risk involved.

Back when we had real conventions, one of the ways that nominations were fought out was over credentials. Rival groups would claim that they were the “real” delegation from one state or another. Ultimately, the convention itself decides. Anyone who recalls the extended dust-up over the Florida and Michigan delegations to the Democratic National Convention, a bitter fight that went on even after there was nothing at stake, can imagine how vicious something like that can be when the nomination is at stake. Given the various penalties that have been assigned as well as the dicey counting so far in the caucus states, there’s plenty of material available for some awesome, and awesomely ugly, credentials challenges.

Any platform fights that have made it to the convention floor in recent decades have been carefully staged and choreographed by the campaign that controlled the convention. No nominee, no one in control – and the choreography collapses. All those crazy amendments offered in the House of Representatives last year, or the ones you’ve seen offered by state legislators? If the convention decides to open up the platform for amendments from the convention floor, they could get a string of those — in prime time. Remember, most intense conservatives (and most intense liberals) tend to believe that their fringe, unpopular ideas are really supported by a silent majority out there.

What are the odds that it works out well for the Republican Party image? In a normal convention, if a few delegates misbehave in any way, the campaign can simply disavow them, and the story goes away quickly. In a deadlocked convention, there’s no one who can do that; the delegates are the party at that point. So if some of them turn out to have nasty stuff in their backgrounds, or decide to enjoy the convention atmosphere a little too much, or just get carried away with partisan or ideological behavior – remember how the Republican debates were marred by embarrassing behavior by the audiences – well, that’s going to get press attention. And no one is really in a position to look after the party image. To the contrary, rival campaigns might even feed the press stories about delegates for the other candidates.

The ultimate nightmare: It’s really not hard to imagine Ron Paul or Newt Gingrich becoming fed up with a credentials or platform decision and just stomping off. Perhaps taking their delegates with them. Remember, a deadlocked convention, if it ever happens, would be the end of months of hardening of positions and intensifying rivalries. Partisans who may have thought back in 2011 that it was a tough choice deciding between candidates will, by the convention, have spent months and in some cases years trying to convince everyone how great their candidate is and how dangerous the others would be, and the one set of people they’re most likely to have convinced is themselves.

How ugly could it get? What if Paul and Gingrich go off by themselves, and declare that their rump group is the real, authorized Republican National Convention and those RINOs down the street are the imposters – and the Paul/Gingrich nominee is the one who is entitled to Republican ballot slots in the fall. Hmmm ... I can think of one former governor of Alaska who might be willing to head that ticket.

The truth is that Republicans are living in a fantasy if they assume that someone could just snap their fingers and 2,000-plus Republican delegates would automatically switch their loyalties to Jeb Bush or Mitch Daniels and that everything would run smoothly from that point. A sensible party would do anything possible to avoid the possibility of a true deadlocked convention.