How Obama's financial watchdog can prove himself 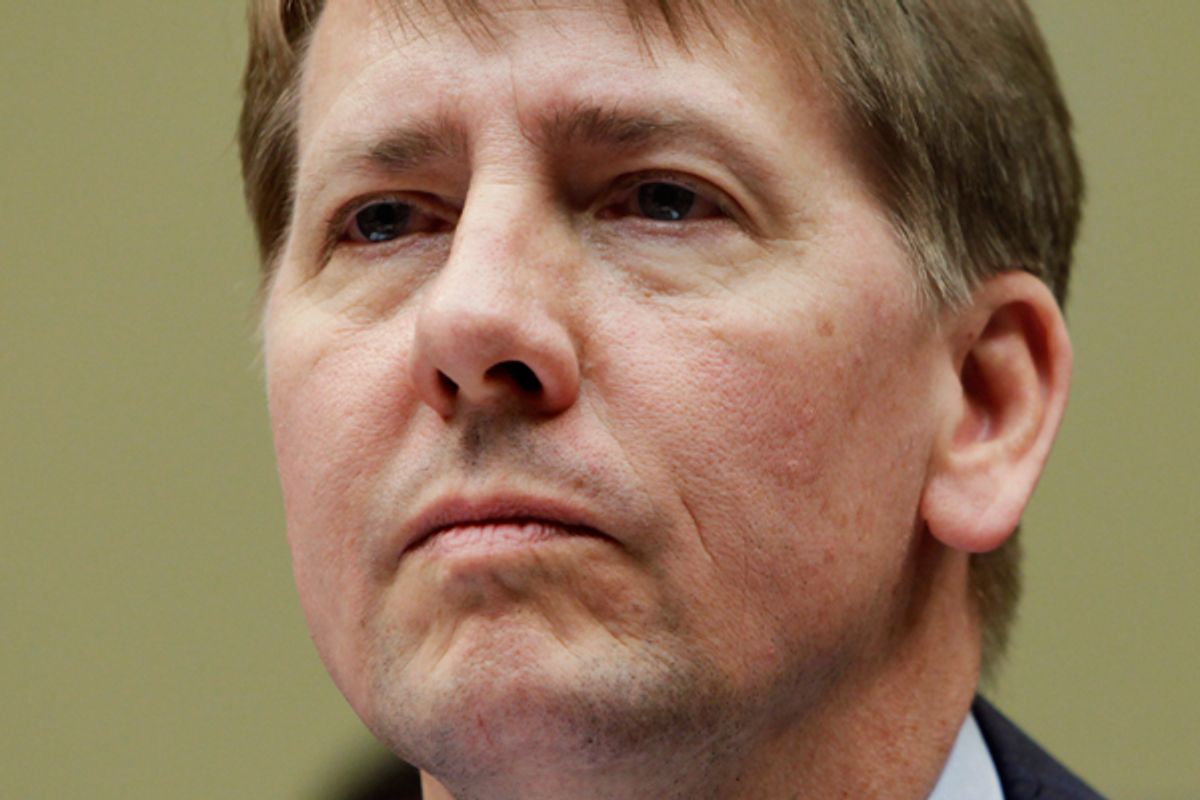 Is the new Consumer Financial Protection Bureau poised to stamp out lawlessness by the street thugs of American business: debt collection agencies?

The answer is a rousing “maybe.”

On Friday, the CFPB inserted a 17-page rule proposal into the Federal Register, in a major step toward getting a grip on the out-of-control debt collection business, as well as riding herd over consumer credit bureaus.  But this was just the first step on a long and perilous journey into one of the most nauseating back alleys of free enterprise. It’s an open question whether the CFPB, under its new director, Richard Cordray, is up to the task of corralling these corporate snakes. It’s almost certain to run into stiff opposition from the debt-collectors’ pals in Congress.

But let’s look on the bright side. This is Cordray’s big opportunity, a chance to really make a difference in an area that matters to millions of consumers. Let’s hope he doesn’t blow it.

No other facet of American business is more corrupt, more intoxicated with illegality, more weakly regulated, and has a greater impact on poor and working people than debt collectors; not credit card companies or subprime mortgages, not even payday lenders. In 2011, 30 million Americans — that's  14 percent of the population — had an average of $1,400 in debt that was subject to the collection process, according to the CFPB. Reports of abuse have been on the rise for years, with complaints swamping the Federal Trade Commission, the undermanned agency that has the task of enforcing the oft ignored Fair Debt Collection Practices Act.

The CFPB hasn’t even gotten started, for which you can blame Congress. This rule-making sets the parameters for whatever action it takes in the future, by defining the size and characteristics of the companies that will be supervised by the CFPB.  The CFPB had to jump through this hoop because of a weakness in the law that created the agency, Dodd-Frank. It only allowed the CFPB to supervise “larger” non-bank outfits. That’s less of a problem for credit raters, which are dominated by three national firms, than it is for the highly fragmented debt collection “industry,” if you can use that term for people whose job it is to harass other people into paying their debts.

The rule proposal the CFPB generated on Friday is a mixed bag. As defined, just 4 percent of debt collectors will be supervised by the CFPB. That doesn’t seem like a lot, but the CFPB calculates that those firms are 175 in number and encompass 63 percent of the debt collection “market,” as measured by annual receipts. Law firms will be subject to CFPB supervision, which is no great surprise — the FTC already regulates them — but not employment- and tenant-screening firms. That’s a disappointment, because firms that scour the criminal records and rent-paying records of potential employees and renters, flying below the regulatory radar, are an increasing source of concern to consumer advocates.

Behind the dry statistics is a heap of misery: people hounded at work, sued without proper justification, and sometimes subject to “sewer service” in which they are served with lawsuit papers by crooked process servers working with shady law firms. As I pointed out a couple of weeks ago, tackling unsavory debt collectors (a pleonasm if there ever was one) is not really a job for Richard Cordray. It’s a job for Eric Holder and his man in Manhattan, U.S. Attorney Preet Bharara, bane of Bronx drug gangs and insider traders and non-bane of the big banks.

The lack of law enforcement interest is lamentable, because just about every day there’s news of yet another enforcement action against debt collectors by the FTC and the states. It reminds me of the days of out-of-control penny stock peddling in the 1990s, which was only curbed when federal prosecutors began throwing crooked brokers in the clink.

With the Bhararas of this world as yet uninterested in protecting consumers from lawbreaking debt collectors, the only weapon in the law enforcement arsenal that’s ever used is the civil enforcement action, such as this lawsuit filed against a large Skokie debt collector by the Illinois attorney general last month. Read the Illinois complaint and you can see the kind of everyday abuses that victims of the recession have to face from these characters:

“Revealing information about debts to people other than the consumer, including employers or family members;”

“Fronting as a law firm and intimidating consumers with fake court case numbers on letters sent to consumers to falsely represent they had been sued for failure to pay a debt;”

“Accessing consumers’ credit reports without authorization to intimidate them to pay alleged debts.”

As in the Illinois attorney general’s report last month, the FTC has found that consumer complaints fall into much the same broad categories: harassment, misrepresentation, illegal disclosure to third parties and overcharging. It’s almost as if these debt collectors are all reading the same “How to Be an Illegal Bill Collector” handbook.

So Cordray’s job is clear. Unless he and his staff are blind, they know what the unscrupulous debt collectors are doing. And he knows what needs to be done:

Read consumers their rights. People are told their rights when they’re arrested. Consumers getting collection letters are entitled to the same courtesy. Cordray should put teeth in the Fair Debt Collection Practices Act by requiring collectors to provide consumers a pamphlet, drafted by the CFPB, informing them of their rights under the FDCPA. Few consumers realize, for instance, that debt collectors are required to validate debts upon request, providing consumers with the details of sums owed. The FDCPA also makes it clear that bill collectors aren’t allowed to collect any amount unless it is “expressly authorized by the agreement creating the debt or permitted by law.” Collectors that don’t provide the FDCPA pamphlet should be shut down. Not fined, put out of business.

Statute of limitations disclosure. Debt collectors should be required to disclose the applicable statute of limitations in the body of their collection letters, in bold type. While it’s not illegal to dun a consumer for an old debt, it is illegal to sue for one. Consumers should be told when a collection effort has no teeth, in plain language drafted by the CFPB. They need to be told that if they make a partial payment it can make it impossible for them to assert the statute of limitations as a lawsuit defense. Again, the penalties for nondisclosure should be severe. Suing for ancient debts exploits the poor and uneducated, and needs to be heavily regulated if not banned entirely.

Criminal referrals. The worst abusers, the ones that engage in a pattern of lawbreaking such as “sewer service,” should be referred to federal and state criminal authorities for prosecution. Federal prosecutors have made creative use of the RICO racketeering statutes against securities law transgressors as well as old-fashioned mobsters. Why not use them against criminal debt collectors?

So those are three modest proposals for Richard Cordray. There’s only one catch, and again it was put there by Congress. Under Dodd-Frank, any rules promulgated by the CFPB are subject to review not just by the courts but by two other potential sources of mischief: Congress and the Financial Stability Oversight Council, a panel consisting of top federal regulators, among them two of President Obama’s most pro-industry voices, Tim Geithner of the Treasury Department and Mary Schapiro of the Securities and Exchange Commission. As the White House has pointed out, the FSOC may, “at the request of a member agency, review regulations issued by the CFPB and, in some cases, even reject the consumer bureau’s regulations.”

So what? Cordray should show his cojones by making the strongest possible rules against debt collectors, and then say to Congress and the FSOC, “Go ahead, make my day.” This is an area in which Obama can show some leadership, because most of the members of the FSOC are presidential appointees. And as for the Republicans in Congress, if they want to make a fuss, so much the better. The GOP has a golden opportunity to show that it’s on the side of debt collectors against the American people.