A Comedy Central smash is too busy soothing white, liberal consciences to actually be funny 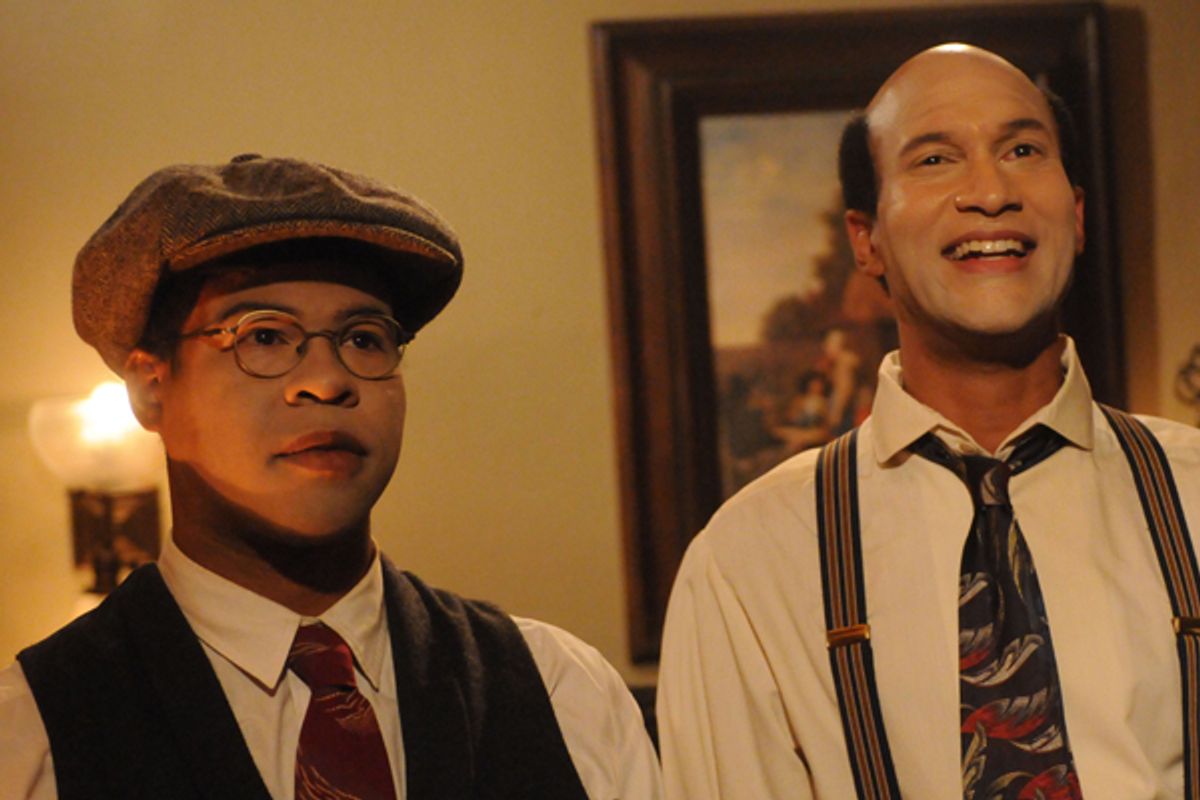 Comedy Central's new sketch show "Key & Peele" (Tuesday, 10:30 p.m. Eastern) is neither funny nor daring. And since these are the show's two goals, it has failed miserably.

"Key & Peele's" deep flaws have gone unnoticed by the majority of reviewers, and I suspect this is due to the attractiveness of the package: Comics Keegan Michael Key and Jordan Peele are black folk who, like most white critics, want to move past race. In our sincere but hasty desire to actualize this mythical post-racist world, Key and Peele are the jackpot. Two light-skinned black men, middle-class in mannerism, who, like our black president, have white mothers. (It's also been popular with viewers; the show was Comedy Central's most-watched premiere since 2009, and was just picked up for a second season.)

On one hand, this is a genuinely good thing. The black experience is hugely varied, existing outside of the limited narratives typically shown in film, television and music. These narrow definitions play a destructive role in how the world sees black people and how black people see themselves. Key and Peele address this tension and frustration by juxtaposing black identities, their own and their characters’, with black caricatures in popular culture.

As the daughter of an African-American father and an Asian mother, I’m tempted to support their efforts. In theory it’s interesting for America to hear about the mixed experience. But "Key & Peele" is less about the complexities of navigating the often tricky multi-racial road, and more about the cheap humor of “White people talk like this,” and “Black people talk like this” -- with black characters deciding whether they’ll talk white or black in a given situation. This premise is the basis of nearly every single sketch.

White talk / black talk is an old and lazy shtick. This "Simpsons" moment from 18 years ago mocks both the comedy and how eager white audiences are to embrace racial comedy that doesn’t address real racism:

Key and Peele do have a few funny moments that show genuine potential for great comedy. The “Lunch With Greatness” sketch in which black actors playing Malcolm X and Martin Luther King Jr. fight for the audience's approval is one of their funniest. But the show’s largest flaw is its preoccupation with translating a particular black experience for liberal white sensibilities. Its eagerness to avoid offense hangs over every tepid sketch about race, sketches already laboring under excessive gentleness and lack of imagination. In each sketch black people are impeded by their own blackness, or more specifically black men cling to an idea of black masculinity, one that Key and Peele suggest is a needless performance.

Look at the following sketches from the first three episodes. Each either attempts to make a certain black masculinity look ridiculous or show the “true” blackness hidden by blacks operating in a white world.

Vain slaves at an auction:

Key and Peele never show the reasons behind the performance of whiteness or blackness, and this is why the show is politically problematic and far less funny that it could be. On "Key & Peele," racism isn’t a real or serious threat. All white people mean well, and the burden is now on black folk to figure out how to behave and adapt. The only sketches that are explicitly about racism are historical and the only racists in the first few episodes are Nazis and slave owners. This makes the black characters seem like fools and the result is a show that makes fun of blacks in a way white liberals will allow themselves to enjoy, under the guise of “talking about race”.

This is the defining difference between "Chappelle’s Show" and "Key & Peele" (which in its staging and presentation is straining to position itself as Chappelle's successor). But Dave Chappelle didn’t care about offending whites or avoiding truly painful moments or topics, and that's why he was funnier.

But who exactly are the bullies in "Key & Peele"? Judging from the majority of their sketches, the main oppressive force the duo faces is a certain notion of blackness, particularly black masculinity. The pressure to conform to race appropriate behavior does exist. Many people of color are familiar with accusations of “acting white,” but this pressure is a symptom of the larger problem -- that they are living in a racist world full of racist ideas and are negotiating their own identification with or against that society. The most powerful comedy is based on pain and discomfort. Patrice O’Neal’s comedy on race for example, is incredible. But Key and Peele fail to ever address the violence of racism, literal or figurative, and this timidity leaves their material lifeless.

Unless you are Bill Cosby (who avoids race almost completely), comedy without bitterness, venom or pain, is no comedy at all. Key and Peele have the grit of a cotton ball. What does it mean that in order for two black comedians to get rave reviews, they must be stripped of the very weapons that are the essence of comedy? One even looks like Elvin from "The Cosby Show" -- that’s the level of non-threatening that this show is operating on.

If they’d only take off their kid gloves, they might actually make comedy about race that feels real.