Santorum's policies would have killed my daughter

Without amniocentesis, her rare disease would have gone untreated and she would have likely died at birth 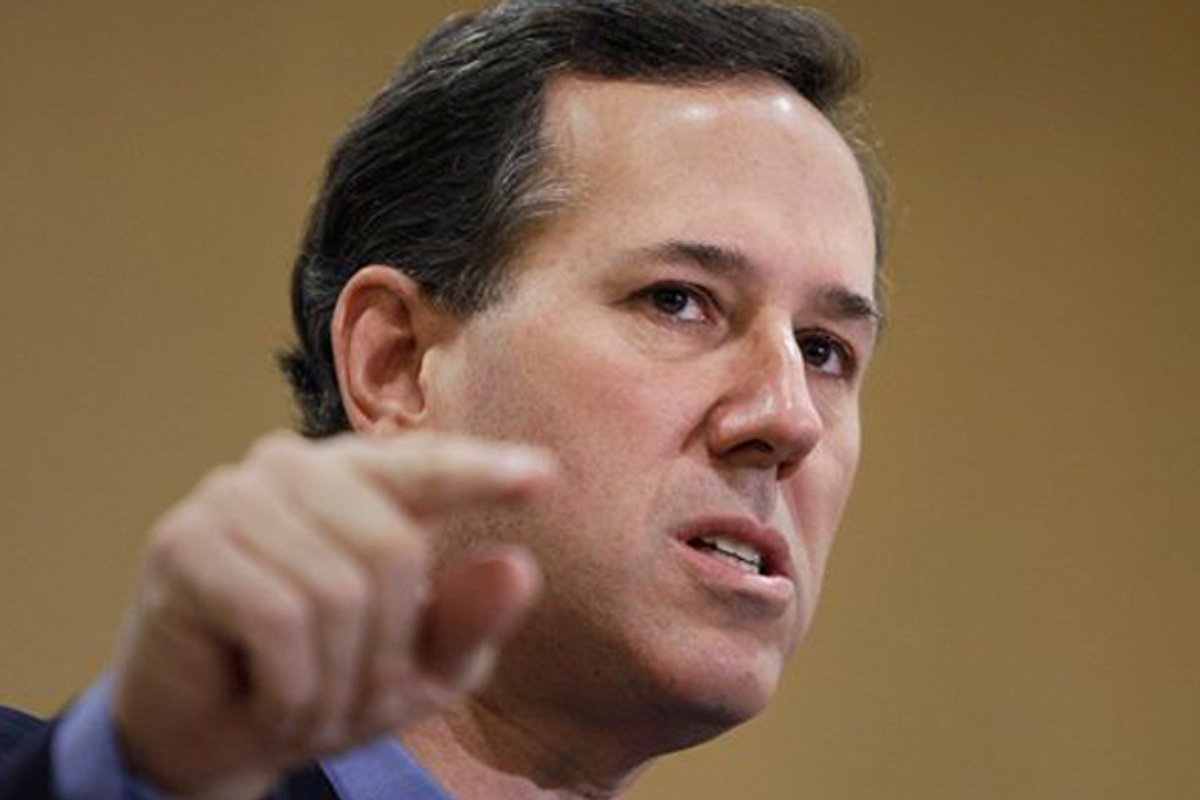 Next month, my daughter Ella will turn 11. She’s a beautiful girl, with blond hair and green eyes. She’s an amazing artist, a brilliant writer, and she can do the splits without even warming up.

And if I hadn’t had an amniocentesis, she would have died the day she was born.

Just over 11 years ago, I received a call from my obstetrician’s assistant to let me know that there was an anomaly in my recent blood test. “It’s probably just a testing error,” she assured me.

But when I returned the following week to have the blood test redone, the anomaly showed up again. There was a foreign antibody in my blood stream that shouldn’t have been there. I was six months pregnant, and up to that point my pregnancy had been completely normal.

Rather than turning to my local politician for prenatal advice, I followed the guidance of my obstetrician, who sent me to a perinatologist, who recommended I have an amniocentesis. Because he had a medical degree and years of experience treating pregnant women, I followed his recommendation.

That day, he stuck an alarmingly long needle directly into my growing belly to sample the amniotic fluid around my baby. The results weren’t good. She had Rh negative disease.

Before the 1960s, Rh negative disease was responsible for the deaths of thousands of babies whose mothers, like me, had negative blood. They usually carried their babies to term and gave birth to them, only to have them die or suffer extreme brain damage as a result of the anemia and jaundice that occurs with this illness.

In 1968, a drug called RhoGAM was approved by the FDA to prevent this disease, and it has since saved hundreds of thousands of lives. In almost every case when it is administered in time it is effective. But in my case, it wasn’t.

Amniocentesis is the recommended test to diagnose this disease, and it enables doctors to define a course of action to treat and monitor these babies for the best possible medical outcome. Had I not had that amniocentesis I likely would not have discovered that she had this illness. I would have carried her to term, given birth to her, and watched her die in my arms.

Instead, thanks to the amniocentesis, my doctor tracked her progress relentlessly. Every week after that I had another (expensive) prenatal screening test, called a serial ultrasound, through which he was able to monitor the anemia that grew steadily worse as more of her blood cells were destroyed -- and track the development of her lungs so that she could be delivered at the best possible moment for her safety. The day he saw that her lungs could function on their own, he delivered her.

Ella was born four weeks premature, a tiny 5-pound bag of bones, with bright yellow hair and eerily orange skin from the jaundice. Within hours of her birth she was given a full blood transfusion – they replaced every single drop of her damaged blood with new blood that would save her life. Then she spent the next five days in the NICU with cotton blinders taped over her eyes and five bilirubin lights shining on her to reduce the jaundice, while my husband and I took turns sitting at her side round the clock, watching her struggle to survive.

For months after she came home, she had to have weekly blood tests to make sure the anemia was in control. They had to draw the blood from her heel because her fingers were too tiny to prick. Finally, at three months her own defenses kicked in and she started producing her own red blood cells.

Happily, she made a full recovery and has no lingering effects from the disease. And it’s all thanks to that one medical test.

If Rick Santorum had his way, I wouldn’t have been able to get that test, and she most likely would have died. Because according to him, tests that give parents vital information about the health of their unborn children are morally wrong. Though he has no medical training, and no business commenting on the medical decisions that women and their doctors make, he argues that such tests shouldn’t be provided, or that employers at least should be allowed to opt out of paying for them on “moral grounds.”

Eleven years ago, my husband and I had two kids and a mortgage, and like most young families we didn’t have $2,000 to pay for a test that my husband’s employer might object to on moral grounds.

So, while Mr. Santorum may think that his blowhard opinions about when and where women should be allowed to have medical tests is righteous, I say it’s ignorance.

In the Catholic church where I was raised, pride, arrogance and an overinflated sense of oneself were considered sins. But in Rick Santorum’s world they are virtues, and they make up the foundation from which he proclaims how other people should live their lives.

When I read stories in the news about countries where women are prevented access to birth control, or the freedom to work, or the right to make choices about their bodies and their lives, I wonder how a leadership with such crazy ideals could ever gain power. But as I look at what’s happening in the debates leading up to this presidential election in our own country, it has become chillingly evident.

As a nation, we are at the precipice of a slippery slope where men in power are arguing about how to take basic rights away from women.  I shudder to think what lies at the bottom of that slope, but if Rick Santorum has his way we will all soon find out.