Do pilots and flight attendants really stay in separate hotels on layover? Plus: Do pilots bring their own food? 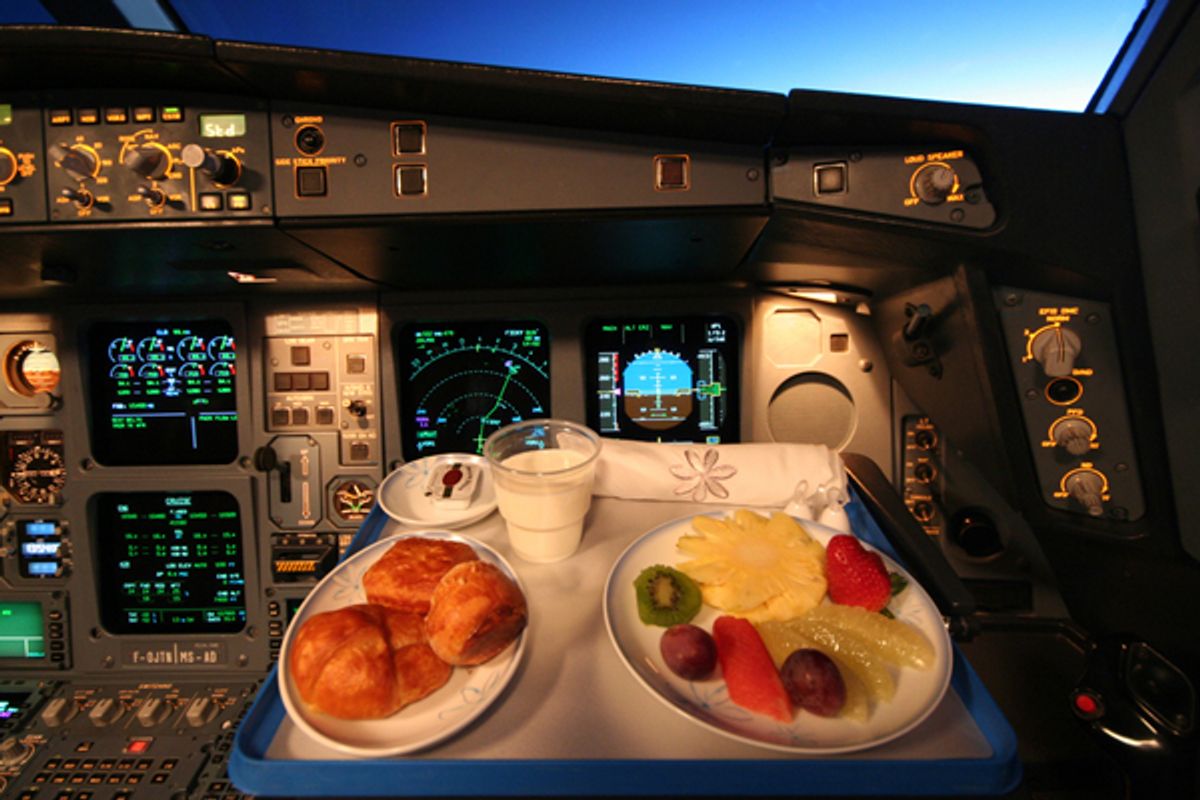 Why can’t commercial jets be fitted with an exclusive side entrance into the cockpit, making it impossible for a potential skyjacker to gain access?

I am asked this all the time. It presents a number of complications.

First, you can't simply cut a hole into the side of a plane and add an extra door. Doing so would require a large-scale and extremely expensive structural redesign. And in most cockpits there simply isn't room for such an addition.

Presumably, too, you'd need to add a lavatory to the cockpit. And what about rest facilities? Long-haul flights carry augmented crews that work in shifts, and the off-duty pilots require a suitable place to relax or sleep. You'd be doubling or tripling the size of the average cockpit, which in turn would take up space already used for galleys, storage and passenger seats.

In addition there are times when it's beneficial for pilots to have direct access to the cabin, for checking out certain mechanical problems, helping the flight attendants deal with passenger issues, and so on. Plus, I don't like the idea of there being only one way out of a cockpit during an emergency.

But even if this were an easy or affordable thing to do, which it's not, would it really be worth the trouble? Strategically, the Sept. 11 suicide takeover scheme was a one-shot, one-time formula. Hijacking protocols are different today, and the awareness of passengers and crew, together with armored cockpit doors, does about as good a job as is necessary, in my opinion.

Long and short: Having the crew barricaded upfront is going to cause more problems than it solves.

Apropos of your column about layovers, is it true that there was once a move afoot to have pilots overnight in different hotels than flight attendants -- an effort by wives to cut down on "office" romances?

This is already the case at some airlines, at least on domestic routes, and has been for years. Pilots go to one hotel, flight attendants to another.

I really don't know how much the hanky-panky aspect enters in. From an airline's point of view it also can be logistically advantageous, and cheaper.

For example, flight attendant contracts often aren't as nitpicky as pilot contracts when it comes to layover stipulations, and a carrier can sometimes get away with putting up its cabin crews in accommodations that are less costly than those given to pilots. And pilots and flight attendants don't always fly identical patterns (see next question). If the pilots are leaving early in the morning but the FAs are working a later flight, it might be the pilots who are out at the airport Holiday Inn while the FAs go to a nicer place downtown. Or vice versa.

Again, this pertains mostly to domestic. Splitting up crews on international assignments is rare.

And yes, the airline covers the cost of all crew-member accommodations while on assignment. An hourly per diem is also paid -- somewhere around a couple of dollars per hour. This is added to the employee's bimonthly paycheck.

If you see a pilot or flight attendant paying for a room, chances are that he or she is off duty and on the front or back end of a commute. Around 50 percent of airline crews live in a different city than the one they are based in -- something I discussed here and here. If an assignment begins early in the day or finishes late, leaving insufficient time to fly in or out, we're on the hook for accommodations. Many crew members buddy-up in nearby apartments known colloquially as "crash pads." Others will rent a room in a hotel close to the airport.

How long do flight deck crews work together? I imagine it'd be terrible to be holed up there for any length of time with somebody you can't stand.

It varies. At most carriers cockpit crews are paired up only for as long as a particular assignment lasts. This can be anywhere from a day to two weeks, though the average pattern lasts about three days. If I've got four different trips on my schedule for the month, generally I'll fly with four different captains. Some airlines, though, use a different, more traditional bidding system in which cockpit crews are matched up for the entire month.

Cabin and cockpit crews are not necessarily together for an entire trip. On international assignments it's typically the same group in both directions, but domestically they are constantly swapping out. On a six-leg domestic trip I'll be with the same captain the entire time, but it's not unusual to fly with six different teams of flight attendants.

In a column recently you mentioned food. How are flights catered for the crew? Do pilots bring sometimes their own food from home?

The specs will vary carrier to carrier, but as a general rule pilots are fed on any flight longer than about five hours. Some stations will stock a designated crew meal, but normally we get the same food that is served in first or business class (yes, all the courses, including soup, salads and desserts). At my airline we are given a menu prior to departure and will write down our choices for dinner and breakfast (first choice, plus at least one alternate).

Airbus planes have a fold-out table at each pilot station. The Boeing I fly does not. Eating in the cockpit can be messy, so on international flights I usually take my meals in the cabin, on my rest break. With potential illness in mind, pilots are encouraged to eat different entrees, but this is not a hard and fast rule. In practice it comes down to your preferences and what’s available.

On my carrier's flights from Brazil, the caterers will stock a special meal exclusively for the captain. The foil-covered entree has a sticker marked "Comandate Breakfast." Some foreign stations will also bring a tray of sandwiches or appetizers just for the crew, in addition to our regular crew meals.

Shorter-haul domestic and regional pilots are on their own. It’s pretzels, peanuts, the food court [crack about Chick-fil-A removed by editor], or whatever you carry from home.

And when you find yourself at the Hampton Inn at midnight, starved from a lack of catering, it's noodle time! As you might recall, I'm a certified Grand Master of Ramen.  Give me a packet of Trader Joe's finest noodles, some Guyanese hot sauce and an in-room coffee maker, and I'll show you a feast. (That's why I carry around those forks that airport security warriors are always taking from me.)

Speaking of pretzels and peanuts, I've always been a bit mystified by the airlines' choice of in-flight snacks. Why do they go with the messiest possible options? Approximately 30 percent of those tiny pretzels, and 80 percent of peanuts, end up on the floor, where they are crushed into unsweepable bits beneath the greasy Tevas of the slob who dropped them. I know there's a certain lowest-common-denominator appeal here, but there has to be something else.

Re: The Funniest Thing Ever Written

For those of you interested in seeing that copy of the 1988 "Guide to Harvard University Dining Services," the fundraiser continues. I'm still a bit short of the $100 mark. Send $5 to my PayPal account (patricksmith@askthepilot.com), and once I hit a hundred I’ll send a copy to anybody who wants one. It'll be a hard copy: I've decided that it's a lot easier to simply run off some copies down at the UPS store than spend all day scanning and uploading.

No word yet on the whereabouts of Samuel David or Sanders Metcalf, the supposed editors of the parody. According to the Harvard alumni guide, no such individuals ever graduated from the university. Perhaps they dropped out? I'm thinking the names are fake, or in some way juxtaposed.