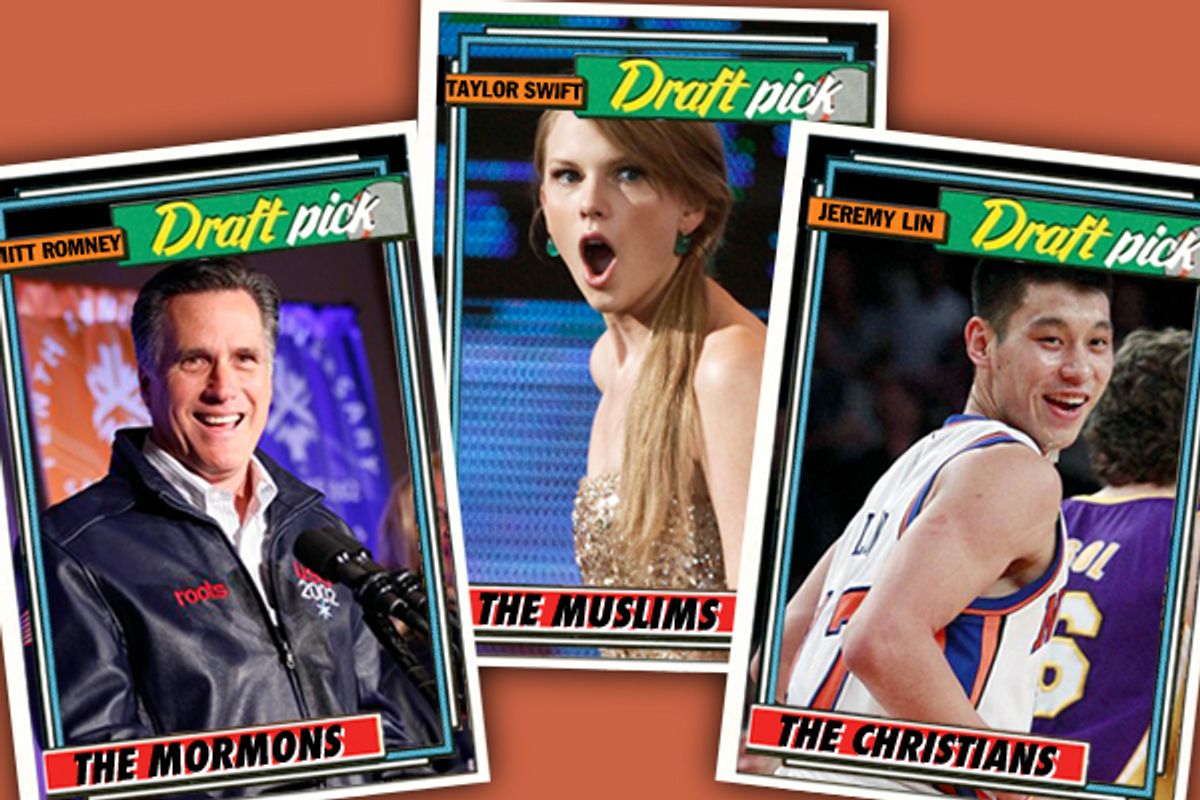 Muslims worldwide groaned upon hearing the news that Oliver Stone’s son, Sean, converted to Islam while filming a documentary in Iran.

Although we -- the collective 1.5 billion Muslims worldwide -- assume Sean Stone is a fine, upstanding man and sincerely wish him spiritual contentment, we earnestly ask Allah why Islam only attracts controversial celebs (in this case, the son of a controversial celeb) who further tarnish our already toxic brand name?

We plead to the heavens for an answer as to why he converted in Iran, of all places, which is currently the most feared and loathed country in America and about as popular as herpes.

We have patiently endured, oh, Allah.

We miraculously survived Mike Tyson, who converted to Islam while incarcerated, and then angrily threatened Lennox Lewis in an infamous interview: “I want your heart. I will eat his children. Praise be to Allah.”

Islam has the lowest favorability rating of any religion in America. If Islam were a world economy, it would be Greece. If it were a professional athlete, it would be San Francisco 49ers punt returner Kyle Williams, who muffed two critical punts, which helped the New York Giants reach the Super Bowl. If Islam went to the prom, it would be the ugly girl with freckles and an overbite standing in the corner with a bucket of pig's blood teetering precariously over its head.  If Islam were a Republican presidential candidate, it would be Newt Gingrich.

A diverse jirga of American Muslim leaders decided “enough was enough” and held an emergency meeting at Lowes’ Home Improvement store in Dearborn, Mich., to strategize how to bolster Islam’s faltering image.

A consensus emerged that we needed to draft popular, mainstream celebrities whose successful addition to our starting lineup would boost our international brand name. After all, 1,400 years of civilization and the religious practices of 1.5 billion solely rest on the tanned shoulders of the rich, famous and beautiful.

Inspired by comedian Dave Chappelle, one of the few Muslim converts who could be considered a net gain, the Muslims held a “Religious Draft” this week, inviting major religions to participate on hallowed ground: McDonald's.

The following is a summary of the proceedings.

THE FIRST ROUND PICK

Since it was universally accepted Islam was the 2011 Indianapolis Colts of world religions, they had first pick.

Predictably, the Muslims drafted free agent Liam Neeson, who recently said, “There are 4,000 mosques in [Istanbul]. Some are just stunning and it really makes me think about becoming a Muslim.” The Irish actor is experiencing a pop cultural rebirth as the 21st century embodiment of uncompromising, kick-ass masculinity and sage paternalism. On behalf of Muslims, he took revenge against France, which recently caved into hysteria and banned the burqa. Neeson single-handedly destroyed the entire country with his bare fists in the blockbuster action film "Taken." Muslims believe Neeson will help rebrand them as Jedi Knights, due to his portrayal of Jedi Qui-Gon in "Star Wars: The Phantom Menace," and replace their current image as Dark Lords of the Sith.

Rumors circulated that many Evangelical Christians felt slighted by this pick since Muslims stole their digital Avatar of Jesus: Neeson voices “Aslan the Lion” from the "Narnia" movies.

The rest of the day's picks were organized according to different types of celebrity.

In a surprise move, the Buddhists requested Mike Tyson from the Muslims. Exhausted from voluntarily suffering for the past 2,500 years, the Buddhists decided Tyson’s crushing right uppercut could “really eff up China.”

In turn, the Buddhists decided to offer the Beastie Boys -- the aging, versatile, hip-hop trio from Brooklyn --  sensing they peaked with their 1998 "Hello Nasty" album. The Muslims accepted, acknowledging the songs "Sabotage" and "Shake Your Rump" as perennial favorites in Egypt and Lebanon.

The Buddhists selflessly threw in Richard Gere and DVD copies of "American Gigolo" to sweeten the deal.

The Jews intervened and said they wanted the Beastie Boys back on their team. They offered the Muslims Ben Roethlisberger, two-time Super Bowl champion quarterback of the Pittsburgh Steelers. Having read about Big Ben’s dubious history of sexual impropriety, the Muslims passed, but decided to donate Mike D of the Beastie Boys to the Jews as a truce offering. Allegedly, the Muslims could never forgive Mike D for the horribly weak rhyme “Everybody rappin' like it’s a commercial, acting like life is a big commercial” on the song "Pass the Mic."

The Jews accepted the offer.

The Muslims, feeling emboldened, made an ambitious pitch to the Christians for Denver Broncos quarterback Tim Tebow, who “just wins.”

Muslims offered former NBA all-star Shaquille O'Neal, who fell from their graces after he acted as a giant genie in the box-office bomb "Kazaam." They also threw in Mahmoud Abdul-Rauf, the controversial Denver Nuggets star who converted to Islam and refused to stand for “The Star-Spangled Banner” before games. The Christians were initially enticed, seeing this as a perfect “born-again” moment, but they passed.

The Muslims went aggressive and promised they wouldn’t supplant the Constitution with Shariah and replace the White House with minarets unless Tebow and Mel Gibson crossed over.

The Christians, anxious to excommunicate Gibson, agreed. For the 2012 NFL season, Tebowing will now consist of prostrating and praising Allah after every touchdown. The Christians asked the Muslims to preserve Tebow’s chastity and not introduce him to Miss USA Rima Fakih or hot Arab women from the reality TV show "All-American Muslim"; the Muslims said they’d try, but they promised nothing.

The Jews made a play for comedian Dave Chappelle, a Muslim, citing his hit series on Comedy Central “Chappelle's Show” as a creative juggernaut that still influences the masses -- especially several rabbis, who apparently love saying, “I’m Rick James, bitch!” after performing circumcisions.

The Muslims immediately rejected the offer, saying Chappelle is perhaps the only living proof that Muslims can be intentionally funny.

Instead, they offered Iranian President Mahmoud Ahmadinejad as an example of an unintentional comedian and provocateur in exchange for Israel cooling down its dangerous rhetoric of a preemptive strike on Iran.

The Mormons tried to intercept Seinfeld by playing one of their highest cards: "Napoleon Dynamite" actor Jon Heder. The Jews pretended not to hear this mockery and allowed the Mormons to slink away with some shred of remaining dignity.

The Jews finalized a deal with the Muslims and rumors have circulated since that Mel and Ahmadinejad are under house arrest in Tel Aviv, forced to watch "The Chosen" and "Fiddler on the Roof" on repeat while listening to Jerry Lewis perform comedy.

Sensing friendly relations, the Jews humbly approached the Muslims for rapper Ice Cube, citing his immense street cred and respect from the hip-hop and African-American communities. The Jews conceded the Matisyahu experiment, although initially promising, had failed, as the Hasidic reggae rapper never lived up to his "King Without a Crown" potential.

The Muslims mulled it over for a considerable time. The jirga decided they would retain eternal rights to Cube’s 1993 hit single "It Was a Good Day" from his multi-platinum album "Predator," but ultimately release him because he inexplicably starred in the awful family comedy "Are We There Yet?"

Catholics made a request for multi-talented actor and hip-hop artist Mos Def from the Muslims, who soundly rejected any and all future offers, stating the entirety of the Middle East and North Africa could never bear to part with Def’s song "Ms. Fat Booty."

Instead, Muslims counter-offered with alternative rock artist Everlast, whose 1998 single "What It’s Like" has made a surprising comeback on radio stations due to the economic recession. The Catholics still remember Everlast as the lead singer of the hip-hop band House of Pain, who produced the classic party anthem "Jump Around," before his conversion to Islam. The Catholics accepted; South Asian Muslims danced to "Jump Around" one last time; and the Muslims in return received Taylor Swift and her legions of pubescent female fans, along with her former boyfriend Taylor Lautner, who played the ethnic werewolf in the "Twilight" movies.

The Muslims had finally secured their most promising young-adult celebrity.

The Mormons halfheartedly offered Mitt Romney. The Evangelicals promised Michele Bachmann and her lifetime supply of blinks. The Catholics, out of sheer desperation and embarrassment, bartered Newt Gingrich and his third wife, Callista.

The Muslims decided to stick with their boy, Barack Hussein Obama, in hopes of retaining the White House  in 2012.

Muslims threw a Hail Mary and asked fundamentalist Christians for Chuck Norris, who so thoroughly kicked the Middle East’s entire ass during the '80s. The Muslims respected Norris for his ability to fire an Uzi, perform a roundhouse kick and wave an American flag at the same time. In return, Muslims offered the infamous WWF wrestler the Iron Sheikh and even agreed to teach the Christians the impregnable camel clutch. Norris, humbled by the offer, respectfully declined, and admitted that although he enjoyed killing hordes of fictional Arabs in jingoistic action movies like "Delta Force," he currently fancied himself an intellectual and activist committed to exposing the nonexistent threat of Shariah infiltrating America. The Muslims were saddened, but collectively agreed to watch Norris in the summer action film "Expendables 2."

The Hindus decided to play their strongest card, actress Julia Roberts, and made a request for journalist Lauren Booth, former British Prime Minister Tony Blair’s sister in law, who converted to Islam in 2010. The Hindus saw her as the perfect revenge and giant, henna-painted middle finger to England for the British Empire’s previous colonization and exploitation of India’s resources. The Muslims thought this was reasonable and now the "Pretty Woman" flashes her million-dollar smile behind a burqa.

Finally, the draft ended with all the religions coveting “the chosen one,” who would single-handedly redeem their public image both at home and abroad.

But, it was sadly to no avail.

The Christians and Church of New York decided to keep NBA superstar and New York Knicks point guard Jeremy Lin. Rumors circulated that they were talking to China about a potential trade to ensure the ambitious superpower does not ask the United States to repay its debt, thus financially crippling and utterly destroying our great nation.

All in all, “it was a good day” for the Muslims in the first Religious Draft.