What everyone gets wrong about Jeremy Lin

The NBA star does not transcend race. Instead of upending stereotypes, he owns them -- unapologetically 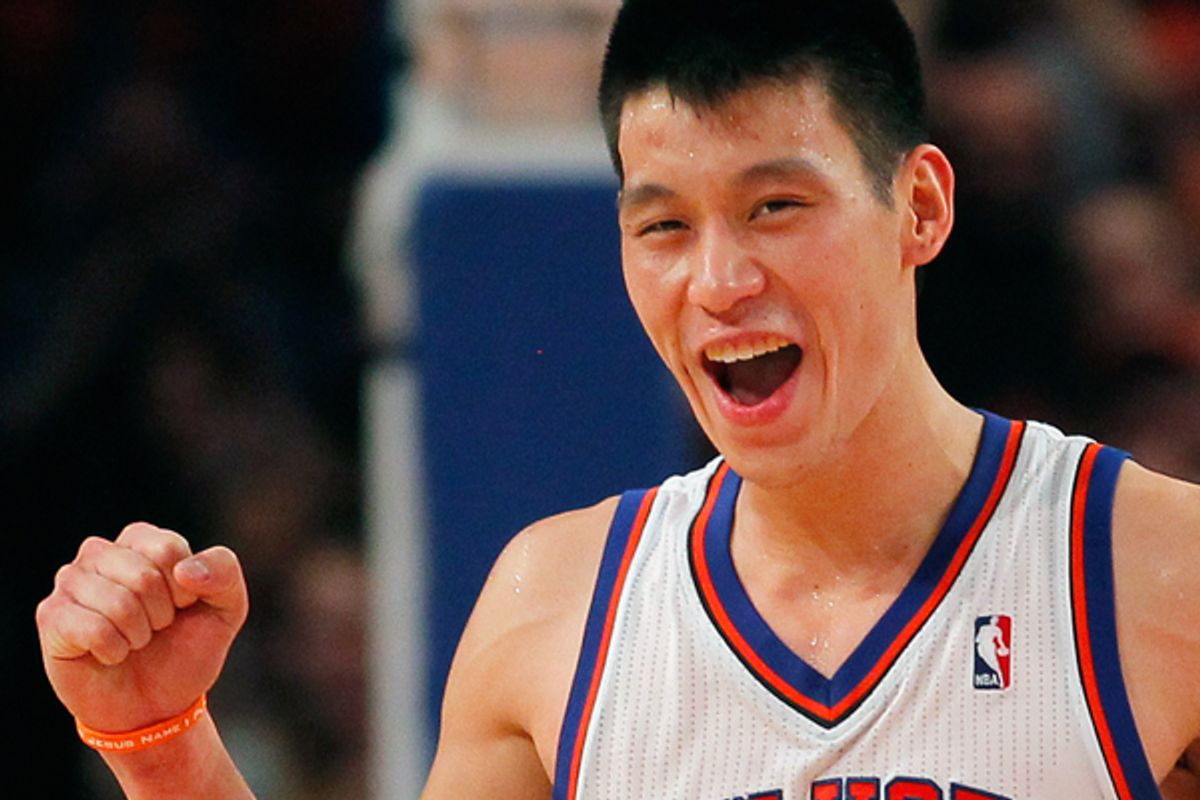 Last week, I wrote a Salon essay about my experiences with racial bullying growing up in northern Minnesota; particularly, a pair of girls who decided to sing “ching-ching-a-ling” and pull their eyes into slits when they saw me in seventh-grade gym class. It was painful to write, and — from the responses I received — pretty painful to read, especially by anyone who had experienced bullying. Thus, it felt almost as if counteracting forces in the universe were acting to promote Jeremy Lin’s farm-team-to-bench-to-global-superstar ascent in the basketball world. Finally! Being Asian American was cool, not something to be bullied over.

I happened to be in New York at the apogee of Lin hysteria, and I stopped into a sports store near Times Square in hopes of scoring his jersey as a Valentine’s Day present for my husband. After swimming through a chaotic but amiable crowd, despite it being near midnight, I was dismayed to find only unwanted XXXXXXXL sizes. A clerk confirmed there were no more; in fact they’d just gotten their first shipment -- and it had been decimated by feral shoppers.

Lin's appeal has been decoded for two weeks now, and much of what has been said is true: As an Asian American, my ethnic pride has me following his career when I don’t even like basketball. He went to Harvard. A handshake with a teammate involves books, glasses and pocket protectors. One signature of his game is that he passes to teammates and makes everyone better; he isn't a lonewolf showboater. Lin not only upends the nerdy Asian stereotypes, he owns them.

Yet I also hear white males unabashedly talk about weeping while watching him play. Other friends who, like me, don’t usually follow basketball know that he had a game on such-and-such night and scored more points that Kobe Bryant. The sports-store crowd in which I was displaying my Tae Kwon Do shopper skills was decidedly multiracial, multi-generational, multi-aged. We all want our Lin.

No athlete of late — particularly an Asian American athlete — has caught our American imaginations like this. To be Lin-spired is to watch Jeremy Lin on the court and want a little bit of that for yourself — you don’t want to be him, necessarily, you want to be a little more yourself. That’s why, as opposed to the recent editorials crowing the tired, ready-made (and implicitly condescending) narrative that he “transcends” race, the reality is quite the opposite. He’s not an Asian American Tim Tebow. His appeal comes from his unapologetic owning of who he is, whether that encompasses being Taiwanese American, a baller, a Harvard grad, economics major, a Christian, a nerd. He projects his specific Lin-ness with such grace and aplomb, it’s impossible not to be a little awed by that, to want a little Lin-spiration for yourself.

As a person who shares little of the above (just the nerdiness and the economics major) with Lin, when I watch him play, something deep inside me resonates, almost as if I am the one leaping like a gazelle and whisking in a three-pointer in the nail-biting last seconds of a tied game. This is I, graceful, unpressured, even as a person who cannot tie my shoes properly if someone is watching me.

What ties me to Lin is seeing that he is doing what he is good at and exactly what he wants to be doing. Which is what we all strive to do. Watching the ferocious joy — and the peace — that suffuses his face as he plays, this is the same feeling I have when I, a professional writer, am writing a great sentence. Flannery O’Connor, when asked why she writes, explains, “because I’m good at it.” What is life if not to find our purpose, our skill, pursue it, and to go for broke, as Jeremy Lin has done?

This week, the bloom is slightly off the rose. Not for Lin — he’s still on fire, still passing to his teammates. But deeply entrenched anti-Asian sentiments that lurk beneath the tectonic plates of society have to burp to the surface at some point (can we take a moment to remember that in the wide swath of American history, Japanese Americans were the only group ever to be interned on the basis of race/ethnicity?). There was ESPN’s sad and sadly predictable straight-from-the-bullies’-playbook “Chink in the Armor” headline about Lin done twice, both on its web site and spoken by an anchor. There was FoxSports.com’s Jason Whitlock’s “Some lucky lady’s gonna feel a few inches of pain” tweet, MSG’s airing the image of Lin’s head coming out of a fortune cookie, sportswriter Buzz Bissinger’s ingenious idea that Lin and Michael Vick should start a dog-meat (“Vietnamese-style”) restaurant, and the seemingly positive but still racially based “AMASIAN!” New York Post’s headline (just try substituting any other racial/ethnic group in there and see how that feels).

But ironically, these events have only strengthened the Jeremy Lin magic. He gracefully forgave the ESPN commentators, accepting their explanation of an “honest” mistake (while to me, it sounds just like my bully claiming she had amnesia during junior high and thus could not remember bullying me). Perhaps even more importantly, ESPN took it seriously, fired the headline writer and suspended the commentator. This is a seismic change for Asian America. It was in 1982 when Vincent Chin, a young Chinese American out for his bachelor party in Detroit ended up dead, pelted by racial epithets, his head bludgeoned by a baseball bat by some out-of-work autoworkers who were mad at Japan ("It's because of you ... that we're out of work!"). The two murderers served no time, and were fined $3,000. It is easy for white males like Buzz Bissinger to say racial epithets are no big deal, that Lin continues to play well despite them — but racial epithets are only a verbal expression of the poison that exists inside.

I don’t necessarily feel ESPN hustled to punish the “Chink in the Armor” perpetrators out of a sense of racial justice, but even if not, Jeremy Lin, with his talent, popularity and his humanity has forced the people who cheer him on to acknowledge that he’s a person, as opposed to the way Asian Americans are so frequently seen as Wesley Yang wrote in New York magazine last year: "a mass of stifled, repressed, abused, conformist quasi-robots who simply do not matter, socially or culturally."

I endured months of racial bullying, two girls to my one.  It wasn’t until some “tough” girls took it upon themselves to stop the bullying, that I realized how pernicious my internalizing of the “ching-a-ling” trope. I thought I was ignoring the bullies, but what I was doing was not defending myself. By their action, the tough girls showed me I was worth defending.  Just yesterday, as I have been continuing to muse publicly on the sad spectacle of racism following in the wake of Jeremy Lin’s rise, I received an angry note from a white man saying “Be like Jeremy Lin and GET OVER IT!”  Now, I can tell him, yes, I try, but somehow I just can’t get over racism. Or having white men telling me how I should feel.

But perhaps Lin-spiration can help us see we are all special selves, worthy of nurturing, cheering on, and defending. Indeed, it might take you from thinking, “…I wish I were a baller… I wish I were taller…” to a place where you might find a little more joy in being yourself, just a little bit better.