Put aside opinion polls and the Komen and Virginia wins. The right's strategy is long-term and based in the courts 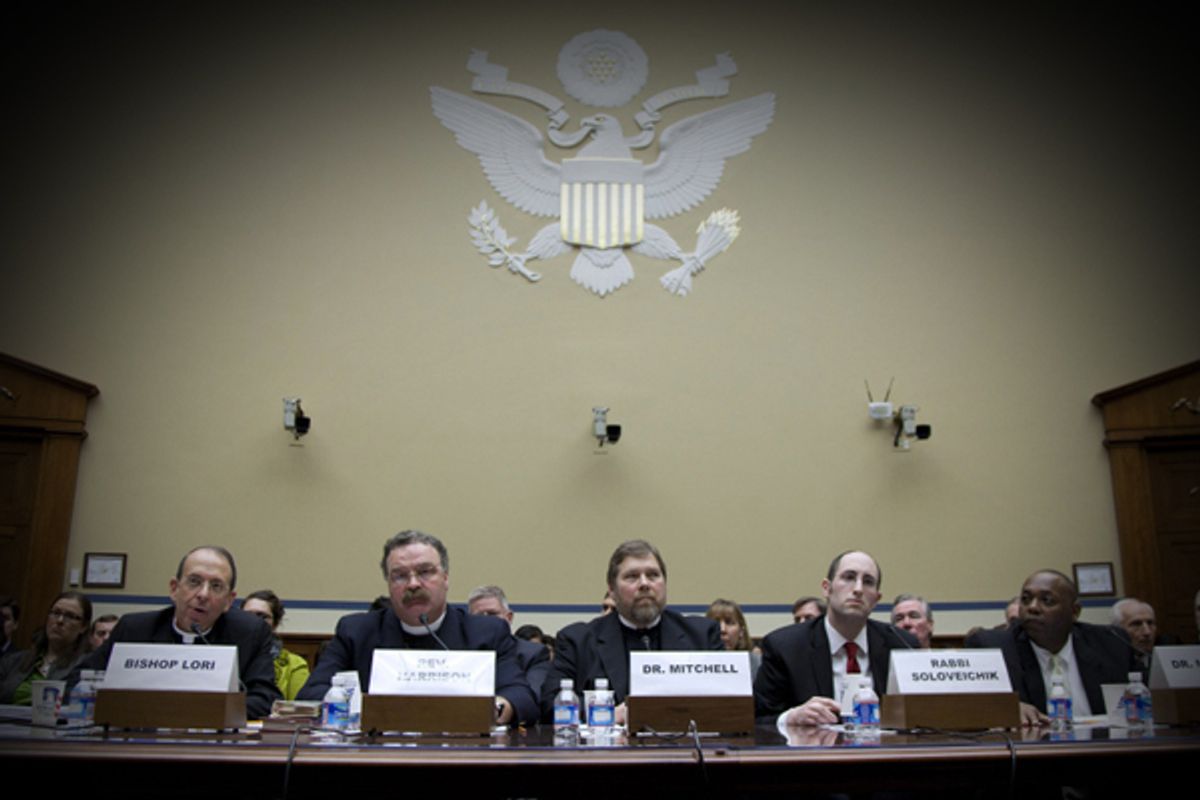 There’s been a troubling trend among some liberals to do a premature victory dance over the contraception insurance benefit debate. Look at the polling data, the reasoning goes, and you’ll find even Catholics support both Obama’s policy and his reelection. Who doesn’t use birth control, except for few outlier zealots? This is a political winner for Obama and the Democrats, the victory dancers contend. Game, set, match.

It’s far too shortsighted, and worse, dangerously complacent, to measure victory election cycle by election cycle. (Even gaming the outcome of this year’s election is a risky proposition at best.) The opponents of birth control insurance coverage don’t use an election as a metric. Sure, they’d love to win, but even a loss inspires them to redouble their efforts, not to pack up and go home after learning they are on the minority side of public opinion.

They are evangelists. If public opinion isn’t on their side, they’ll strive to change public opinion. They are dogged, well-financed and unrelenting. Their claims about the proper role of religion in governing and policymaking — which Democrats fail to contest forcefully enough — are eroding the separation of church and state, and taking down gains made in access to reproductive healthcare along with it.

Democrats have attempted to defuse the Republican framing of the issue as one of “religious freedom” by arguing that the real issue is women’s health. In making that argument, they regrettably glide over a crucial step in the logic. Yes, it’s undeniable that what is at stake here is reproductive healthcare. But in claiming that their religious beliefs entitle them to an exemption from a regulation requiring insurance coverage for birth control, clerics and their Republican allies are attempting to relitigate and overrule established Supreme Court jurisprudence in the court of public opinion — without pushback from Democrats.

As Scott Lemieux writes at Lawyers, Guns and Money, “a constitutional challenge to the contraception provision wouldn’t even rise to the level of being frivolous” under existing constitutional jurisprudence. Contrary to conservative claims, the Supreme Court has not interpreted the Free Exercise Clause as requiring such expansive religious exemptions. But in our current political climate, which causes Democrats to crouch in fear of being labeled anti-religion, such exemptions are nonetheless tucked away in legislation at the behest of the burgeoning religious lobbying industry, becoming law even if not required to protect free exercise rights.

Case in point: an exemption in the Affordable Care Act for members of healthcare sharing ministries, who reject insurance and pay for their fellow “professing Christians’” medical costs. The lobbyists approached a Democrat, former Virginia Rep. Tom Perriello, who did their bidding for them.

Indeed, the Affordable Care Act in its final form was cobbled from capitulations to religious demands. Conservatives — including Democrats like former congressman Bart Stupak — threatened to prevent passage over their false claim that the bill would require federal funding of abortions. Even a superfluous reiteration of the Hyde Amendment’s abortion funding ban, offered by Rep. Lois Capps, D-Calif., failed to satisfy Obama allies like Jim Wallis. He pressed, in the name of “the faith community,” for even greater restrictions on insurance coverage for abortion, even though no taxpayer funds were going to be used for it in the first place.

Existing standards for covering birth control at the state level, which have been upheld in court and laid the groundwork for the Obama policy, are now “in danger because the right, which has now been unmasked as opposing contraception as well as abortion ... stayed in the ring and flamed up an issue,” says Gloria Feldt, a  former president of Planned Parenthood Federation of America and author of "No Excuses: 9 Ways Women Can Change How We Think About Power."

Few people believed Feldt when she predicted in 2004 that opposition to birth control was more than just a fringe movement that needed to be taken seriously, she says. But if the right is “successful in pulling that thread,” she adds, “the entire fabric of contraceptive coverage will be unraveled.” The pro-choice movement, Feldt contends, must “set the terms of engagement or lose the battle.”

The opponents of legal abortion and readily, widely available contraception have already made extraordinary gains — enormous setbacks for women — at the state level. This week's developments in Virginia, where pro-choice opposition prompted Gov. Bob McDonnell to back off his pledge to sign into law a bill that would mandate transvaginal ultrasound before abortion, demonstrate how robust, unabashed activism can expose the right's extremism on these issues. But it also showed how the long game has paid off for the right, as the ultrasound bill may nonetheless become law, just without the vaginal intrusion.  “Pregnancy care centers,” some affiliated with evangelical and Catholic churches, teach that birth control is harmful and doesn’t even work. The Catholic Church — which is claiming that the federal government is infringing on its rights — disseminates false information that contraceptives do not prevent unintended pregnancy and harm women. In the ever-shifting goal post of sin, the emergency contraceptives Ella and Plan B are now falsely depicted by Obama foes as “abortifacients,” opening the door for opponents to claim the contraceptive coverage requirement compels them to cover abortion, too.

While the Catholic bishops complain that the government is infringing on their religious liberty, the government is funding religious ideology. In Texas, for example, while the Legislature cut funds to family planning, it took a federal block grant under Temporary Assistance for Needy Families (TANF) and created the Alternatives to Abortion program. The contractors who receive state funds under this program not only refuse to offer abortions or referrals for abortion, they do not offer information about birth control, or even referrals for it.

The opponents of birth control coverage are playing a long game. As they ransack family planning funding and prop up religious organizations, they are transforming the way information — and misinformation — about abortion and birth control is passed on to the public. Their efforts are enabled by narratives about religious persecution, demanding, in effect, to create a religious alternative to public health policy based in medicine and science. The Constitution doesn’t require or even envision that. Democrats and their pro-choice allies need to stake out their own long game.