Before he made it big, Bill uncovered possible ties between Oswald and the CIA. His book likely won't be so daring 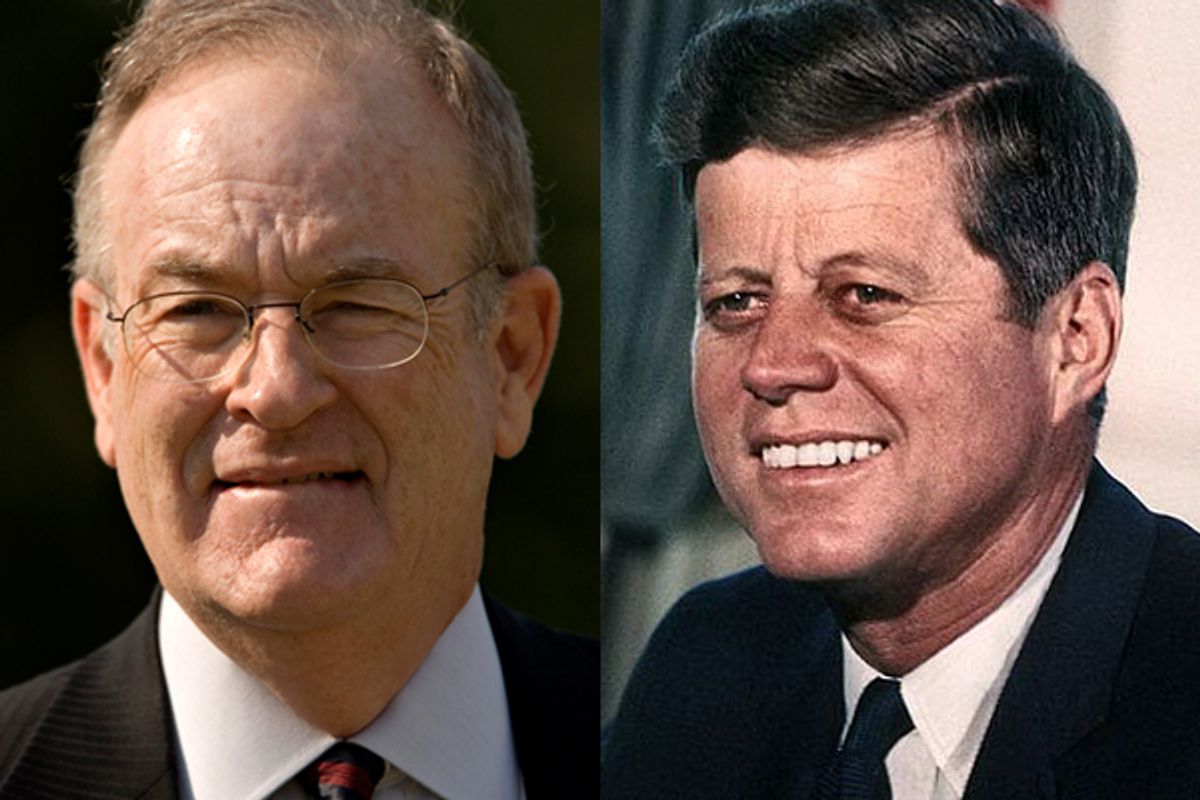 This article originally appeared on WhoWhatWhy.

You may have heard that the Fox News celebrity host Bill O’Reilly has a forthcoming book on JFK, timed for release this fall. How could you have not heard? Scheduled in anticipation of the 50th anniversary of Kennedy’s death in 2013, the book has been heavily covered by the media—examples here, here and here–despite a near total lack of information as to the content. Here’s an excerpt from USA Today which is typical:

“As with most baby boomers, the murder of JFK was a signature moment in my life,” O’Reilly, the top-rated Fox News talk show host and a former high school history teacher, said in a statement. “'Killing Kennedy' will answer many questions about the president and why his life was cut short.”

What sort of answer will O’Reilly provide to the fundamental and extremely controversial question about why Kennedy died? Will he perpetuate the mainstream media’s near-constant advocacy of the lone-nut scenario? O’Reilly did not even hint at how he would handle it or whether he has any new information.

Yet another book by O’Reilly, his recent “Killing Lincoln,” was, as some reviewers noted, more like a John Grisham rendition of the tragedy than the work of an investigative journalist or scholar intent on major breakthroughs—or even deeper understanding.

Let’s compare the nature of O’Reilly’s current bestseller fare, and the media’s receptivity to it, with journalism done some years back, again on the JFK assassination—by the very same Bill O’Reilly. The earlier work had some major, groundbreaking revelations—and legitimate, very hot content, based on reporting conducted in the early 1990s. It will come as a surprise, because most of us never heard about the show’s revelations—not at the time, and not since. There’s a reason: the highly disturbing, even threatening evidence of a mostly unexplored link between Oswald and U.S. government agents.

Watch Bill O’Reilly below, back when he hosted the syndicated television show Inside Edition:

There is no question that the sealed JFK Files are extremely embarrassing for the CIA. House investigators have told Inside Edition that the Agency did not fully cooperate in their investigation and that the CIA had final say in the final report that the House Assassinations Committee made public. Thus the public report makes no mention of the CIA’s links with Lee Harvey Oswald. But the secret documents are another story.

…House investigators uncovered evidence that the CIA planted nine agents inside the Garrison investigation to feed him false information and to report back to Langley what Garrison was finding out.

That was explosive content, and O’Reilly was prepared for major press interest in this scoop. That’s not, however, the way things played out. Jerry Policoff, who interviewed O’Reilly back in those days for an article in the alternative newsweekly The Village Voice remembers:

“He thought the piece was so important that he held a press conference to promote it. Of course no mainstream media showed up. He expressed his astonishment to USA Today, and I interviewed him as a follow-up. He repeated to me that he could not understand how the media could not even show up at a press conference on such an important issue.

Ok – so that was Bill O’Reilly back then, in the 1990s, before he became a breakout star. Will O’Reilly’s new Kennedy book really tell us why he died?

Not likely, if we consider what it took for O’Reilly to make it big-time.

One pundit, who used to appear on Fox a lot in O’Reilly’s first years there. recalls a producer mentioning that O’Reilly wanted to continue doing JFK assassination reports, but that network chief Roger Ailes and other top management “kept stepping on the story.”

Years later, O’Reilly is on a roll that is likely to continue—provided he plays his cards right.

The lesson is this: Listen to the higher-ups, don’t step on the wrong toes, and you, too, can make it to the top.

We look forward to seeing if today’s O’Reilly takes inspiration from his younger, feistier self in probing beneath the official story of the Kennedy assassination. But we’re not holding our breath.