The bailout will avert a euro zone breakup for now, but many worry it won't be enough to fix the nation's economy 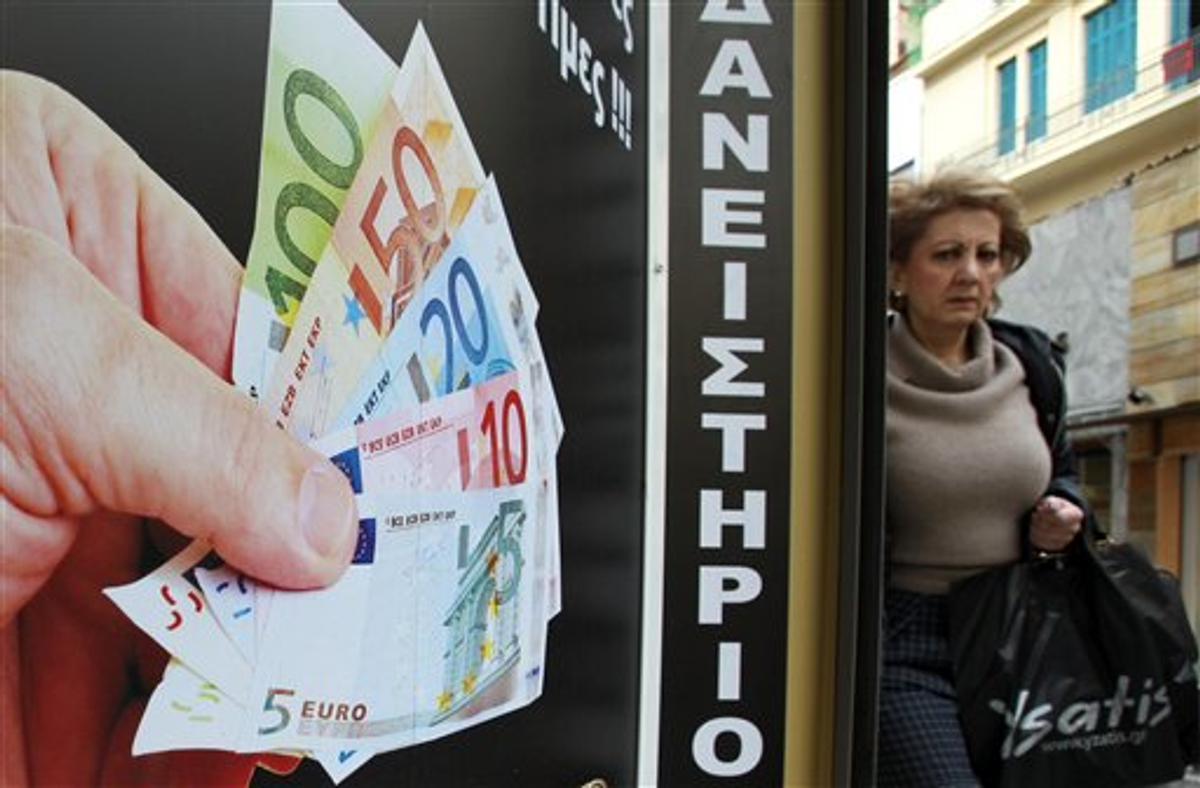 A pedestrian passes outside a pawnshop in Athens, Tuesday, Feb. 21, 2012 (AP Photo/Thanassis Stavrakis)
--

ATHENS, Greece — They contemplated a divorce but ended up having another baby.

Greece and its euro zone partners saved their marriage by agreeing on a $170 billion bailout, but it hasn’t squashed talk of a messy breakup.

Some analysts see a Greek debt default as inevitable. Even Greece’s lenders fear the program is “accident prone,” as they said in a report for euro zone finance ministers before they approved Tuesday’s bailout.

It’s far from a universal opinion. Greek leaders lauded the agreement, naturally, saying it saved the country from a chaotic default. Others add that Greeks — despite the occasional violent protest against austerity measures — grudgingly accept that reforms are necessary.

Still, more of the same won’t cut it, said Costas Michalos, president of the Athens Chamber of Commerce and Industry.

“It’s a bad rescue package,” he said. “It’s not the right mixture of economic policies. If we follow the same economic policies of the past two years, there will be no other option than default, which I’m sure no one wants.”

The new loan package — Greece’s second massive bailout in as many years — aims to finally fix the country’s debt problems and restore its battered economy. It requires wage cuts and public sector layoffs, and strives to make the economy more competitive, which would attract investment.

A Eurogroup statement issued after the vote Tuesday in Brussels said the program is a “comprehensive blueprint” for debt sustainability by 2020 and economic growth. The success, it noted, “hinges critically on its thorough implementation by Greece,” no doubt a reminder of the country’s track record of missing reform targets.

“One can’t help but get the feeling that everyone involved is going through the motions, doing what they feel they have to do, rather than what they want to or what they believe in,” Sony Kapoor, managing director of Re-Define, a London-based think tank, said in a statement. “Confidence in the success of what has been agreed is rather low.”

Greece “will almost certainly” need yet another bailout, Kapoor added. “The troika have had to do some arithmetic gymnastics in order to make the numbers add up but their optimistic assumptions are unlikely to hold.”

Yet, for all their tough talk about cutting off the free-spending Greeks, the euro zone countries ultimately chose the safe route. The “comprehensive blueprint” helps Greece but also safeguards financial stability “in the euro area as a whole,” the Eurogroup statement said.

The new package hinges in part on private bondholders taking a nominal 53.5 percent loss, which will wipe out more than $140 billion from Greece’s overall debt. The IMF warned back in December that unless there’s near-universal voluntary participation by the bondholders, it would be hard to achieve debt sustainability by 2020.

Greece is expected to take extraordinary efforts to repay its creditors. It plans to amend its constitution to prioritize repayments. Also, the lower-valued bonds to be issued to private investors will be governed under English law. That provides stronger protections for investors.

Prime Minister Lucas Papademos has been criticized in some circles for conceding those guarantees, but University of Piraeus finance professor Dimitris Malliaropulos sees the other side.

“That, for me, is a guarantee that Greece will stay in the euro,” he said, adding that the commitment to the euro should improve investor sentiment.

Countries that default usually can devalue their currency, which makes exports cheaper, boosting growth. But with Greece ensuring euro repayments to lenders, there’s no incentive to default, Malliaropulos said.

“If you leave the euro, you should do it now — before the debt exchange,” he said.

The swap is scheduled to be complete in early March. If that and other conditions are met, Greece expects to receive bailout cash — avoiding default — before nearly $19 billion in bond repayments are due later in the month.

Petros Doukas, a former deputy finance minister, said he’s confident Greece will stay on course. He advocates for a larger debt write-off and a Marshall Plan-style spending package by the European Union and the United States — an idea he acknowledges is unlikely to occur.

The optimism, he said, stems from acceptance by politicians and average Greeks that there’s no turning back.

“Whoever thought that pensions and salaries could be reduced? It was unprecedented thinking,” Doukas said. “People complain about it, but they accept it.”

A potential curveball is an election planned in late April. Papademos is an unelected technocrat whose job is to shepherd Greece through the bond swap and bailout negotiations. He’s currently leading a coalition government that includes Greece’s two large parties, the conservative New Democracy and the Socialist PASOK.

Leaders of both parties have signaled their post-election commitment to carry out the reforms demanded by international lenders. Polls show New Democracy leading, but likely in another coalition government.

“The politics are a major risk for the Greek economy,” Malliaropulos said. He noted that Greece has had only a few coalition governments and “they didn’t go very well.”