Julian Assange prepares his next move

The WikiLeaks founder is doing TV, building a news organization and preparing his ultimate legal defense 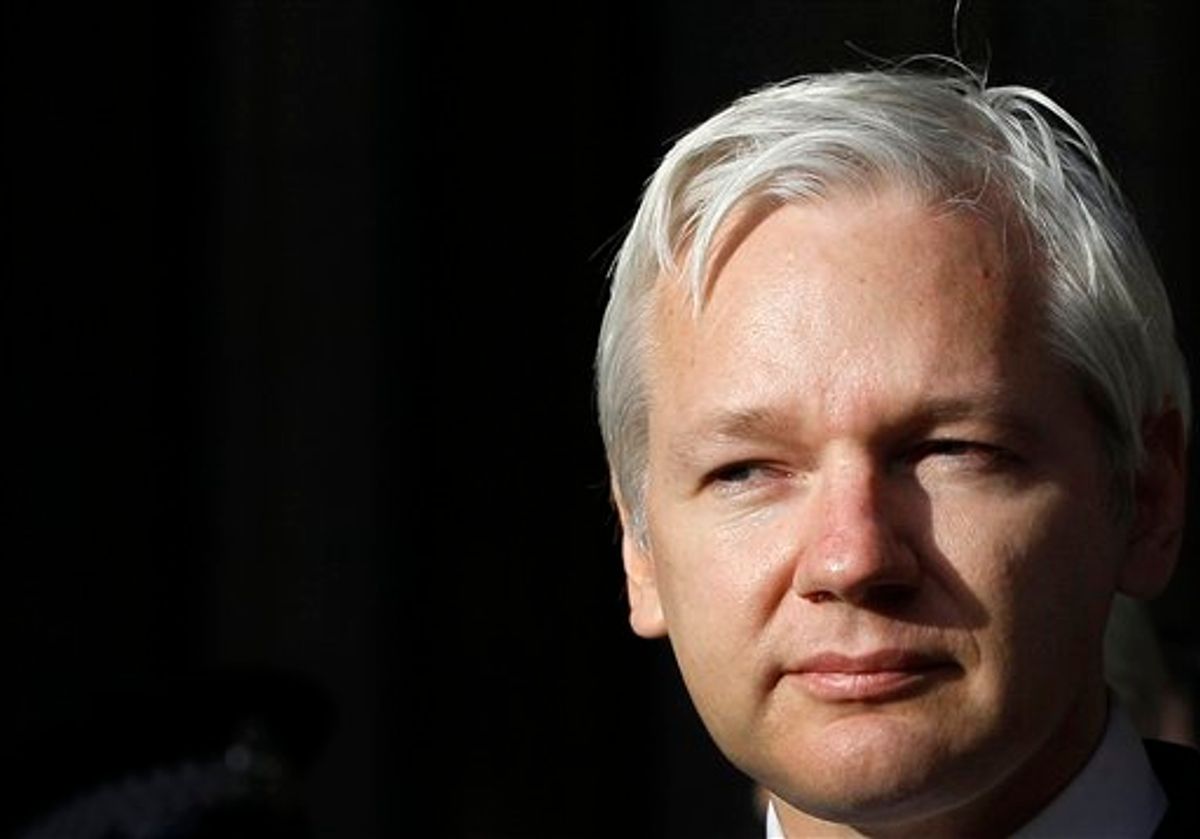 In a week or two, the U.K. Supreme Court will rule on the final appeal for Julian Assange, the editor in chief of WikiLeaks. If he loses, he will be extradited to Sweden to answer questions about alleged sexual misconduct. His legal team fears extradition to Sweden ultimately would mean extradition to the U.S., where Assange is the subject of a grand jury investigation in northern Virginia.

Meanwhile, the court martial process has begun for Pfc. Bradley Manning, a former U.S. Army intelligence analyst accused of leaking hundreds of thousands classified or otherwise restricted documents WikiLeaks published.  Assange’s London-based lawyer, Geoffrey Robertson, told a law and media seminar in Houston that he believes the humiliations and the nine months of solitary imposed on Manning were an effort to make him “falsely confess to being groomed by Assange.” (Robertson said Assange offered to answer the Swedish prosecutor’s questions by phone from the U.K., but she refused without further explanation.)

A U.S. prosecution of Assange, an Australian citizen, might involve charges of conspiring with Manning, perhaps under the 1917 Espionage Act. The law targets anyone who (or any conspiracy to) “communicates, delivers, transmits or causes to be communicated” to a “foreign” government, faction or person information “relating to the national defense which ... could be used to the injury of the United States,” without proper authorization. It’s punishable by any number of years imprisonment or by death. The U.S. used the broadly written law to convict and execute the Rosenbergs for passing atomic secrets to the Soviets and to prosecute Daniel Ellsberg for leaking the Pentagon Papers. At Manning’s preliminary hearing, the prosecution argued Assange and Manning collaborated electronically to steal sensitive government information.

The prosecution has linked raw material its experts found on assorted equipment owned or used by Manning to several WikiLeaks publications. The Collateral Murder video shows a U.S. helicopter firing on several Iraqis, killing, among others, two Reuters journalists and a van driver who tried to rescue one of the pair. The classified reports of the Afghan War Diary and the Iraq War Logs detail several years of military action. Cablegate, with over a quarter-million secret State Department cables, showed U.S. Sens. John McCain, Joe Lieberman and others promising Libyan dictator Moammar Gadhafi military hardware. They captured Hillary Clinton instructing diplomats to swipe biometric data, passwords and credit card numbers from foreign dignitaries at the United Nations. They documented Canada’s covert promise of aid for the U.S.-led invasion of Iraq. The Gitmo Files are memoranda describing prisoners held by the U.S. Joint Task Force at Guantanamo.

Possible criminal prosecution over this material is just one battlefront before Assange. Since December 2010, Bank of America, Visa, MasterCard, PayPal and Western Union have blockaded donations to WikiLeaks, destroying, the organization says, 95 percent of its revenue. Kristinn Hrafnsson, an official WikiLeaks representative, said average monthly donations in the year before the blockade exceeded €100,000 (about $130,000) and then dropped to under €10,000 (about $13,000) afterward. In small ways, supporters have managed to maneuver past the blockade as just another pay wall, tipping WikiLeaks through the social micropayment service Flattr, purchasing official WikiLeaks T-shirts and coffee mugs, and using other creative tactics. But costs for WikiLeaks and Assange — legal fees, server upkeep and more — continue to mount.

Fighting back, DataCell, an Icelandic company that handled credit card donations destined for WikiLeaks, lodged an antitrust complaint against Visa and MasterCard in cooperation with WikiLeaks in July 2011. Visa and MasterCard, Hrafnsson said, control 97 percent of the European cardholder market. Sveinn Andri Sveinsson, a lawyer for DataCell, told me the European Commission has yet to reply, and that the Commission said in January that it needed more time. Assange has said donations bound for WikiLeaks and those for his legal defense are separate, and the organization’s website reflects this.

The separation reinforces the picture of WikiLeaks as a media organization and Assange as just one of its journalists, albeit the famous one. If the U.S. can break that picture and cast Assange as an electronic thief or as someone who solicited Manning for classified material, the nascent U.S. prosecution against him likely would have more strength. Lucy Dalglish, executive director of the Reporters Committee for Freedom of the Press, said at the seminar that the “U.S. government has shown the more you are acting like a journalist, the more they leave you alone. Assange putting himself in the position of a journalist puts him in a better position if he were to be charged in the United States.” (The First Amendment allows the press to publish leaks, though acts of leaking classified material may still be illegal.)

Robertson, in what seemed a forecast of Assange's possible legal strategy, described three positions between journalists and sources. “First is that the journalist receives the information unknowingly such as through the traditional brown paper envelope or through the Internet. It seems no one would suggest the publisher should be liable.” A second involves intermediary contact between journalists and sources. “The source might say, ‘I’ve got information of importance; how can I get it to you?’" and “the journalist says, ‘Drop it in a certain place at midnight.’" This “arranging to receive information,” Robertson continued, “should not be criminal.” But a third position, where a “journalist contacts the source and persuades him or her to breach confidentiality of government or bribes him, then that is soliciting and that should fall under the scope of the Espionage Act.”

Assange’s electronic methods keep sources anonymous, Robertson said. “You could waterboard him for weeks, and he couldn’t name his source, because he wouldn’t know.”

Eric Schmitt, a New York Times reporter who worked with the Afghan War Diary and Iraq War Logs material alongside Assange, stated at the seminar the Times’ position that Assange was but a source for the paper. “It was impossible to know just what he’d done,” Schmitt said, and added that the Times “was not part of a crusade or the Musketeers or anything like that.”

Reporters from Der Spiegel, the Guardian and Le Monde worked with Assange and Schmitt to publish stories based on the documents. Assange considers these and other news outlets media partners, arguing that an attack on WikiLeaks becomes an attack on all free press.

In January, Assange announced a move into a more traditional medium. He’ll host a TV show titled “The World Tomorrow,” 10 weekly episodes of half-hour conversations with “key political players, thinkers, and revolutionaries from around the world,” according to a WikiLeaks press release. He’s filming the show from house arrest in England with Quick Roll Productions, whose origins are unclear. (Quick Roll Productions hasn’t replied to my request for information.)

Russia Today, rebranded to the more neutral-sounding RT in 2009, licensed the show, giving Assange an audience of over 430 million worldwide. Since the Kremlin funds RT, the licensing has drawn loud criticism. Julia Ioffe in the Columbia Journalism Review describes RT as the Kremlin’s “soft-power tool to improve Russia’s image abroad” and as often just a way for Russia “to stick it to the U.S. from behind the facade of legitimate newsgathering.” Legitimate or not, RT’s Alyona Minkovski certainly criticizes the U.S. and takes a pro-WikiLeaks position. The young hostess has given sympathetic airtime to hackers hitting American companies over the WikiLeaks banking blockade, for example. WikiLeaks says its show “is independently produced and Assange has control” and that WikiLeaks offers a “Broadcasters license, only”; RT’s chief editor said Assange is “not an empolyee [sic]. We bought the show.” The RT deal, then, may just be a profitable way for him to get a gigantic retweet.

Though the sale might help Assange fight the banking blockade, it also fuels the narrative that he’s a glutton for personal attention. But his background is that of an intellectual activist for whom public relations is just another war zone. Victory for Assange consists in advancing “scientific journalism“ — an emphasis on primary sources — and making conspiracies distrust their internal communications due to leaks. He reasoned toward these aims while steeped in the cypherpunk scene — discussions with other brainy, computer-programming subversives who advocated social change through the cryptographic protection of individual privacy.

As a cypherpunk, Assange wrote a deniable encryption file system that’s indicative of his mind-set. It’s named Marutukku after an Akkadian protective spirit. Imagine a “Rubberhose squad”: accusers wielding rubber hoses demand a defendant hand over his incriminating files. In his password-protected files, the defendant is hiding incriminating information along with unimportant data. If he’s using Marutukku, he can’t prove he’s surrendered all his passwords. Therefore, Assange reasons, the defendant shouldn’t reveal any of them or, depending on the squad’s psychology, just a few of the unimportant ones. Surrendering anything incriminating would encourage the squad only to beat more passwords out of him, so he has no incentive to cooperate or to sell out confederates. Once the squad understands this, they can decide between giving up or beating him just to see him suffer.

Similar logic underpins WikiLeaks: If Robertson is right, Assange can’t prove who his sources are. If Assange winds up on the witness stand, the world likely will watch him deploy with steely calm algorithms he developed years in advance for an end game just like this.

It wouldn’t delay his extradition, but Assange can make an application to the European Court of Human Rights if the U.K. Supreme Court decides against him. A U.K. Supreme Court win would leave him at risk of U.S. extradition from England. Regardless, he still might have an ace up his sleeve. In 2010 WikiLeaks released a file named insurance.aes256 and on Wednesday released another “insurance” file with an “aes” name.  AES-256, a currently unbreakable encryption scheme, appears to keep the files scrambled until a password is published. Assange has said little about them, but he did say “insurance files” would be released in a certain scenario: “if something happens to me or to WikiLeaks.”