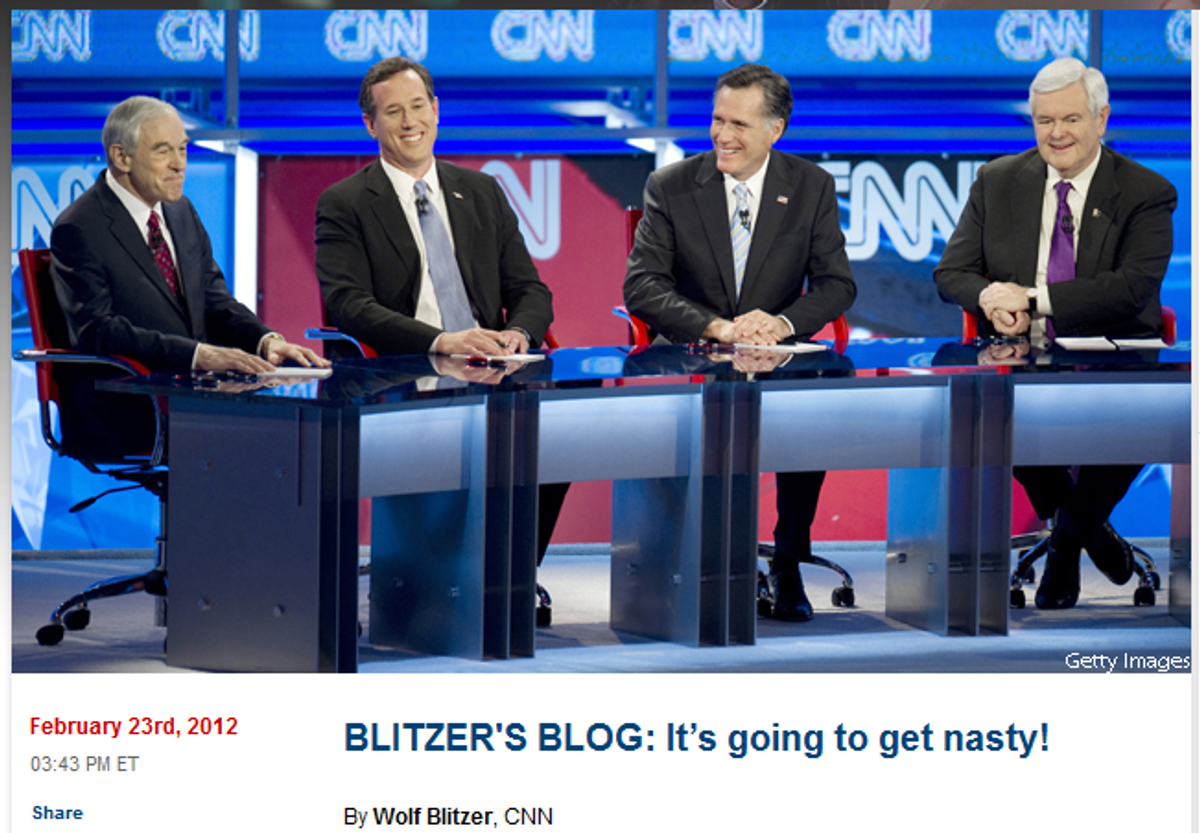 Developing at this hour, reports of nastiness (CNN)
--

You know that computer program that automatically generates baseball game reports based on box scores? Wolf Blitzer is like an extremely primitive and unsophisticated version of that, for political news. (Or "news.") Today, the CNN anchor takes to "Blitzer's Blog" to report that the 2012 election campaign has been very intense. He also predicts that it will get more intense later, when it gets closer to the general election.

By Wolf Blitzer, CNN
(CNN) – If you think it’s been a rough ride for the Republican candidates during this current campaign season, just wait. This will be seen as child’s play once the general election campaign begins.

I’ve said this before but I’ll say it again: the war of words between President Obama and his campaign supporters versus the eventual Republican nominee and his supporters will be fierce.

Even though there has already been a lot of talking and stuff happening during this political campaign, you won't believe how much additional talking and arguing there will be as it continues. I have said in the past that Barack Obama and the person running against him will say things at and about each other, and I am saying it again. Things will be said.

If you think Wolf Blitzer's blog post about the intensity of this campaign is finished, just wait. He quotes three lines from last night's debate, then writes four more one-sentence paragraphs:

And that’s just for starters. Just wait for what’s coming.

By the way, the president and his supporters will not be shy in fighting back.

And like the Republicans, they will have hundreds of millions of dollars to finance attack ads.

Get ready for a brutal political season.

THIS JUST IN TO THE SITUATION ROOM: Every other political blogger has retired from political blogging to curate Pinterests about sandwiches instead, because Wolf Blitzer just made our jobs redundant.

The only remaining question is whether Wolf Blitzer is a better blogger than his Fox counterpoint in incisive online commentary, Greta Van Susteren. As long as CNN insists on "copy editing" Blitzer, we may never know for sure.