Bibi or Barak: Who will plunge us into Mideast war?

As U.S. officials seek to head off an Israeli attack on Iran, the character of two old soldiers will be decisive 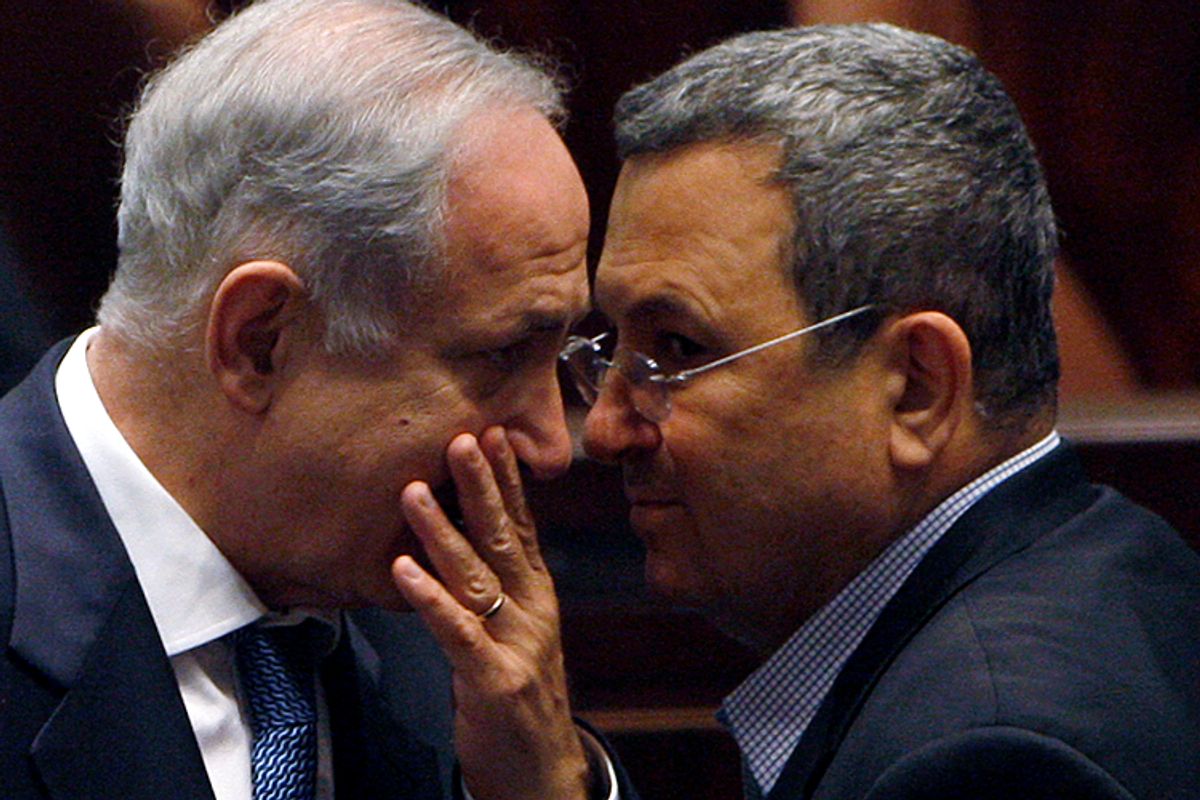 In their joint management of what appears, at least, to be the run-up to an Israeli attack on Iran, who is pushing harder for war, Prime Minister Benjamin Netanyahu or Defense Minister Ehud Barak?

A casual observer would probably say Netanyahu. He’s the Likud hard-liner, the settlement-builder, the one who’s always comparing Iran to the Nazis; Barak is the peacemaker from Camp David, the good friend of Bill and Hillary. Barak is an honorary Democrat; Netanyahu is the Republicans’ fantasy pick for president.

While all this seems true, it doesn’t necessarily tell you which of them is more determined to strike Iran’s nuclear facilities, and Ha’aretz is reporting (here and here) that U.S. officials say Barak is the one. As National Security Advisor Thomas Donilon and National Intelligence Agency chief James Clapper arrived in Jerusalem this week to press the case against an Israeli attack, Ha’aretz reported:

The Americans are particularly worried about the hawkish line that Defense Minister Ehud Barak has adopted on the matter. They apparently have the impression, however, that Prime Minister Binyamin Netanyahu has yet to come to a final stance on the dispute.

Knowing where Netanyahu and Barak stand on the Israeli political spectrum is little help in gauging which one will be more in favor of the military option when decision time comes, which could be as early as spring. Their war records as prime minister, their character, their readiness to withstand American pressure, and the power relationship between them are much stronger indicators of what they will do on Iran than their views on West Bank settlements.

For all their militant rhetoric, neither one ever started a war from the prime minister’s office, which was held by Netanyahu for six years (1996-99 and 2009-present), and by Barak for a year-and-a-half (1999-2001). Both followed standard-issue, tough Israeli policy on Palestinian terror, but the most notable military move by either one was Barak’s withdrawal of armed forces from Lebanon. (The most enthusiastic warrior of 21stcentury Israel was the most dovish P.M. of all on the Palestinian question: Ehud Olmert, who in three years fought Hezbollah in Lebanon, Hamas in Gaza, and in between bombed Syria’s upstart nuclear reactor.)

Judging by their records, then, neither Netanyahu nor Barak is eager to attack a foreign country. But the specter of a regime as radical as Iran’s closing in on nuclear capability is something Israel has never faced, so past performance counts for only so much.

As for which man is more likely to stand up to pressure from the Obama administration, that’s clearly Netanyahu. He and President Obama are fundamentally different, not to say natural enemies. The prime minister is a Toscanini in orchestrating congressional opposition to White House strong-arming.

For Barak, White House pressure was never much of an issue. He was regarded as an ally by Clinton and Obama, until the current administration saw he was stringing them along on Netanyahu’s sincerity about peace. Now that he’s reportedly considered the true Iran hawk in Israel’s government, the White House would seem to have little use for him.

"He panics under pressure”

Then there’s the character issue, and on this score I’d say Barak would be more likely than Netanyahu to point for war. One of the three most decorated soldiers in Israeli history, Barak has bragged about killing Arab enemies while “seeing the whites of their eyes.” He’s a menacing individual, a systems analyst with a taste for violence; while playing “no, after you” with Yasser Arafat at Camp David in 2000, he grinned while manhandling the Palestinian through the door. Years later, in his political comeback, Barak stormed a Labor Party stage, his bodyguards tailing him, tore the microphone out of a party elder’s hand and demanded that the membership give him his way. He’s more ruthless than Netanyahu, and no less ambitious.

As for the prime minister, if this were strictly an issue of character, or personality, I think that when the moment came to bomb or not to bomb, he would back off. To quote Ariel Sharon: “Netanyahu lacks the sound judgment and iron nerves required of an Israeli prime minister. He panics under pressure.” On the basis of personality alone, bombing Iran and starting what could turn into a long regional war seems too big for Bibi. Political cartoons often show him in a nervous sweat. It’s commonly noted in the media that he is intimidated by his (third) wife, Sara, and that she runs her own personal “court” inside his bureau. As Israeli leaders go, he radiates instability.

Commenting on the latest shakeup in Netanyahu’s office, Yediot Aharonot diplomatic correspondent Shimon Shiffer wrote on Wednesday: “I’ve been covering the activities of prime ministers since Menachem Begin. I spent many hours watching their bureaus at work, and I can honestly say that I’ve never come across a working environment so divisive and anarchic as this one.”

The only prime minister’s office he ever covered that rivaled Netanyahu’s for intrigue and disorder, Shiffer wrote, was Barak’s.

I asked two retired Mossad chiefs, an army ex-chief of staff and a former defense and foreign minister, all of whom made life-or-death decisions separately with Barak and Netanyahu, which seemed more likely to go to war with Iran, and which seemed to have more influence over the other. The Mossadniks and the army man had no comment,  another indicator that the Israeli security officials don't care to debate the issue publicly. Former defense and foreign minister Moshe Arens, a hawk on Iran, said there was no reason to assume the two men differed in their views. As for which had more influence over the other, Arens said: “I don’t know. Maybe they themselves have no way of knowing.”

Much has been written about the two men’s relationship, which goes back 40 years to when Barak was Netanyahu’s commander in Sayeret Matcal, Israel’s most legendary  commando unit. Barak, at 70, is eight years older than the prime minister. Face-to-face, the defense minister would seem to be the senior partner. However, there’s no evidence that Netanyahu is submissive at work to his former commander.

Moreover, Barak needs his one-time lieutenant much, much more than the other way around. Without Netanyahu, the defense minister’s political career is over. In recent years he’s become terminally unpopular on a personal level with the public and his political colleagues. He’s highly respected, though, as Israel’s top military technocrat, which is the reason Netanyahu keeps him around.

But the most important element in the power relationship between the two, certainly in a decision on starting a war with Iran, is that Netanyahu is the prime minister and Barak isn’t. It will be Netanyahu calling (or calling off) this shot.

Myself, I cannot envision him as prime minister of Israel on the day after Iran has reached the point where it is beyond Israel’s ability to stop it from building nuclear weapons, a point Israelis estimate will arrive around September. I can’t imagine Netanyahu envisioning himself in such a helpless predicament facing such a threat. From childhood, from his family – especially his 101-year-old father, Benzion, a great historian of the Spanish Inquisition whose stated political views make his son’s seem positively  liberal – from the heroic death of his brother, Yonatan, in the raid on Entebbe, from his understanding of history, Bibi Netanyahu inherited, and has nurtured, a grim certainty of what happens to Jews when they are vulnerable.

Speaking about International Holocaust Day in a cabinet meeting early this month, he said that what’s changed for Jews since the Holocaust is “not the lack of enemies – the same will to exterminate the Jewish people, first of all the state that was founded; that will remain and has not changed.” What’s different, he said, is that now Jews have the power and will to defend themselves.

“The Jewish people, the government of Israel,” he said, “have the right, the duty and the capability to prevent another extermination of the Jewish people or attack on its state.”

On May 5, Netanyahu will be at the White House to hear from Obama why he shouldn’t go to war. According to Ha’aretz, the president will come to the meeting armed with a statement of support from Israeli President Shimon Peres, who will convey it privately to Obama at the AIPAC convention.

The Americans will be ganging up on Netanyahu, isolating him from his supposedly more hawkish partner, Barak. But even by himself, Netanyahu should prove an awfully hard nut for Obama to crack, especially on the matter at hand.