Can one man change Apple? 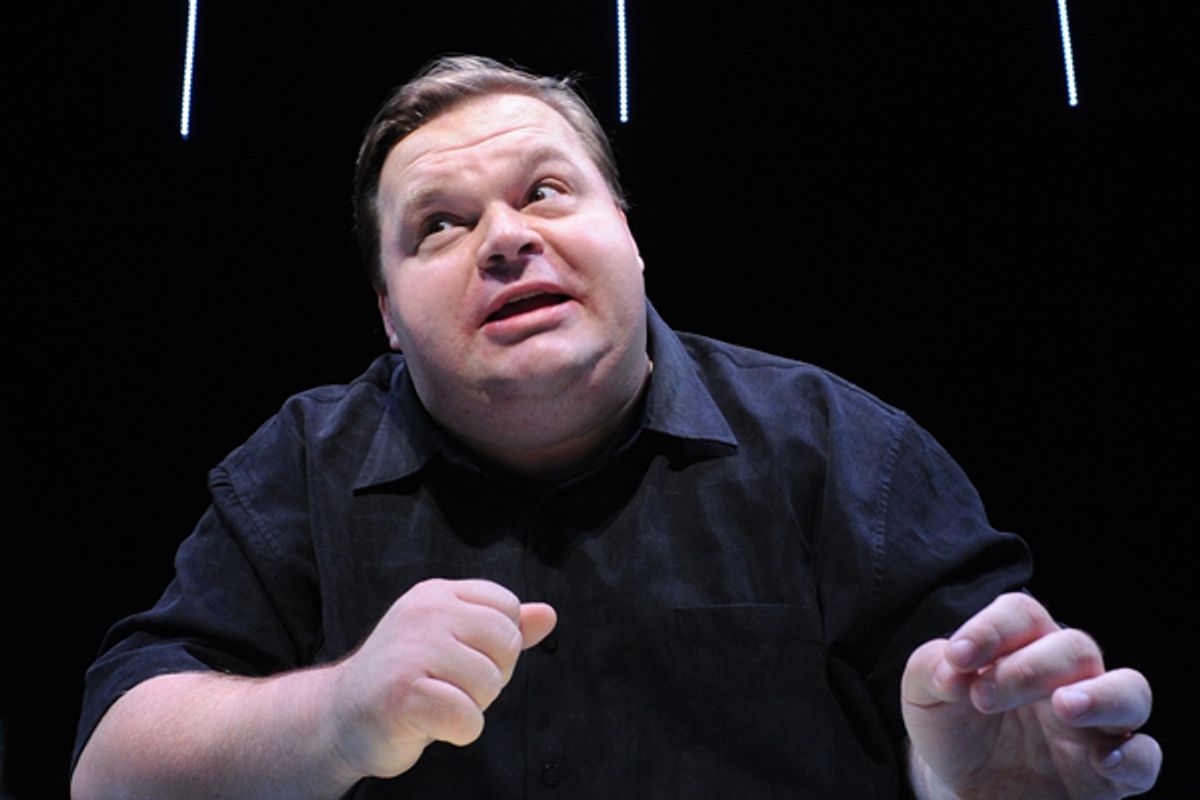 If you would seek proof of that famous Margaret Mead adage: “Never doubt that a small group of thoughtful, committed citizens can change the world; indeed, it’s the only thing that ever has,” look at what’s happening as more and more people protest Apple Inc.’s labor practices in China.

Take it one step further: if you should ever doubt the impact a solitary artist can have against injustice, meet Mike Daisey.

Daisey is a monologist, a creator of one-man shows, whose performance piece “The Agony and the Ecstasy of Steve Jobs” has jolted audiences into action as he parallels the obsessions of Jobs, the recently deceased former CEO of Apple; our consumer-driven lust for iPods, iPhones, and iPads and the human toll taken by their manufacture.

Apple – like virtually every other electronics manufacturer – subcontracts much of the work that goes into building its devices to companies in Asia. One of them, Foxconn Technology, is the largest private employer in China. Its factories there and in other parts of the world put together approximately 40 percent of all the consumer electronics devices on the planet. Their largest facility, Foxconn City, is in Shenzhen, just across the border from Hong Kong, and employs nearly a quarter of a million workers.

Employees work excessive overtime, in some cases seven days a week, and live in crowded dorms. Some say they stand so long that their legs swell until they can hardly walk. Under-age workers have helped build Apple’s products, and the company’s suppliers have improperly disposed of hazardous waste and falsified records, according to company reports and advocacy groups that, within China, are often considered reliable, independent monitors. More troubling, the groups say, is some suppliers’ disregard for workers’ health. Two years ago, 137 workers at an Apple supplier in eastern China were injured after they were ordered to use a poisonous chemical to clean iPhone screens. Within seven months last year, two explosions at iPad factories, including in Chengdu [the capital of Sichuan province in southwest China], killed four people and injured 77. Before those blasts, Apple had been alerted to hazardous conditions inside the Chengdu plant, according to a Chinese group that published that warning.

The explosions were due to accumulations of aluminum dust from the polishing of thousands upon thousands of iPad cases. There have been more than a dozen suicides as well – part of Foxconn’s solution was to install nets around buildings to catch jumpers – and accounts of workers fired after their hands were made useless by repetitive stress injuries.

Many have reported on the working conditions at Foxconn, but it’s Mike Daisey’s one-man play, media coverage of his work and the broadcast of a one-hour version on the public radio series This American Life that seem to have galvanized public opinion.

Physically large and in charge, Mike Daisey’s performance style suggests a peculiar combination of the late Spalding Gray and Lewis Black of The Daily Show with Jon Stewart. He sits at a table on a bare stage with some notes and a glass of water and simply tells his story; at times hysterically funny, at others, poignant, withering and accusatory. Some might find his manner a bit loud and overbearing: the night we were there last fall, media moguls Barry Diller and David Geffen were sitting a couple of rows in front of us and walked out after the first fifteen minutes or so. (Don’t try to deny it: we have your ticket stubs.)

But maybe it wasn’t Daisey’s profanity and mild bellicosity that got under their skin and instead, some simple truths. Daisey begins by detailing his own passion for all things Apple (“I am an Apple fanboy, I am a worshiper in the cult of Mac.”) and slowly segues into stories from the company’s history and its increasing dependence on Chinese labor. Daisey traveled to China to see it all firsthand.

“You know,” he says, “when we dream of a future when the regulations are washed away and the corporations are finally free to sail above us, you don’t have to dream about some sci-fi-dystopian-Blade Runner-1984 bull____. You can go to Shenzhen tomorrow – they’re making your s___ that way today.”

All the bad publicity and petitions that sprang up, especially after Daisey’s public radio appearance apparently have gotten to super secretive Apple, which at an estimated worth of more than $465 billion has now surpassed ExxonMobil as the largest publicly traded company in the world. They’ve launched a PR counteroffensive that included this week’s “exclusive” visit to Foxconn City by Bill Weir of ABC’s Nightline, who reported on the suicides and other health issues but said, “China has very different values when it comes to gainful employment” and compared some of the complaints to what “you’d hear at any factory or college campus.”

Weir breathlessly referred to Apple products as “precious objects” and “works of art” and said that although Bob Iger, the CEO of the Walt Disney Company, ABC’s owner sits on Apple’s board and the Steve Jobs Trust is Disney’s largest stockholder, “I only agreed to report exactly what I saw.”

In its latest, annual Supplier Responsibility Progress Report, Apple for the first time released a list of its subcontractors and announced that it has joined the Fair Labor Association, which makes unannounced factory inspections to check on working conditions and report violations. And last Saturday, Foxconn announced it’s raising salaries by as much as 25 percent (to $400 a month) and reducing excessive overtime.

But not so fast. According to the activist Hong Kong-based Students and Scholars against Corporate Misbehavior, “The new basic wage… only applies to the workers in Shenzhen. In inland provinces, where two-thirds of production workers are based, basic salary remains meager. Given that inflation in China is high. Foxconn is just following the trend of wage increases in the electronics industry in China.”

As for the Fair Labor Association, it’s not all that independent. Writing for CNN.com, Scott Nova, executive director of the Worker Rights Consortium, notes:

…Most of its money — millions of dollars per year — comes from the very companies whose labor practices it is supposed to scrutinize. Although Apple has not disclosed its financial relationship with the Fair Labor Association, it is likely now the organization’s largest funder. Moreover, on the association’s board of directors sit executives of major corporations such as Nike, Adidas and agribusiness giant Syngenta. The job of these executives is to represent the interests of other member companies, such as Apple. Under the Fair Labor Association’s rules, the company representatives on the board exercise veto power over major decisions.

Jeff Ballinger, director of Press for Change, a labor rights group, told The New York Times, “[It] is largely a fig leaf. There’s all this rhetoric from corporate social responsibility people and the big companies that they want to improve labor standards, but all the pressure seems to be going the other direction — they’re trying to force prices down.”

Yes, Foxconn workers make well above the average salary of Chinese garment workers and yes, there are cultural issues and the overwhelming tide of globalization. But Apple is sitting on cash reserves of nearly $100 billion. As others have noted, just one tenth of 1 percent of that could go a long way toward improving conditions for its workers in China. They could even set up a health care plan. And as an anonymous former Apple executive said, “Suppliers would change everything tomorrow if Apple told them they didn’t have another choice.”

Meanwhile, Mike Daisey keeps performing “The Agony and the Ecstasy of Steve Jobs” around the country. He finishes another New York run at the Public Theater on March 18, but you can listen to the This American Life radio version, and at his website, MikeDaisey.com, you now can download the entire script.

Daisey says, “If Apple would spend less energy finessing its public image, and instead apply its efforts to real transparency and accountability, it could be a true leader for the electronics industry. Apple today is still saying what it said yesterday: trust us, we know best, there’s nothing to worry about. They have not earned the trust they are asking for.”

There’s much protesters can do: petitions, letters, phone calls, boycotts. And Daisey has written that “talking about it, thinking about it when making purchasing decisions, and understanding it is not just symbolic. In a world of silence, speaking itself is action. It can be the first seeds of actual change. Do not be afraid to plant them.”

In other words, Mike Daisey proclaims, “Spread the virus.”

UPDATE: Public radio's "This American Life" has issued a press release retracting their original Mike Daisey program because they’ve learned it contains “significant fabrications” and are devoting this weekend’s entire show to a report on the alleged errors in the story. This article was inspired by Daisey’s stage performance but the details about Apple’s contractors in China come from a number of reputable sources, including The New York Times and CNN and we believe it is accurate.