Lambchop's Kurt Wagner has been taken for granted over 11 near-perfect albums. It's time to herald him as a genius 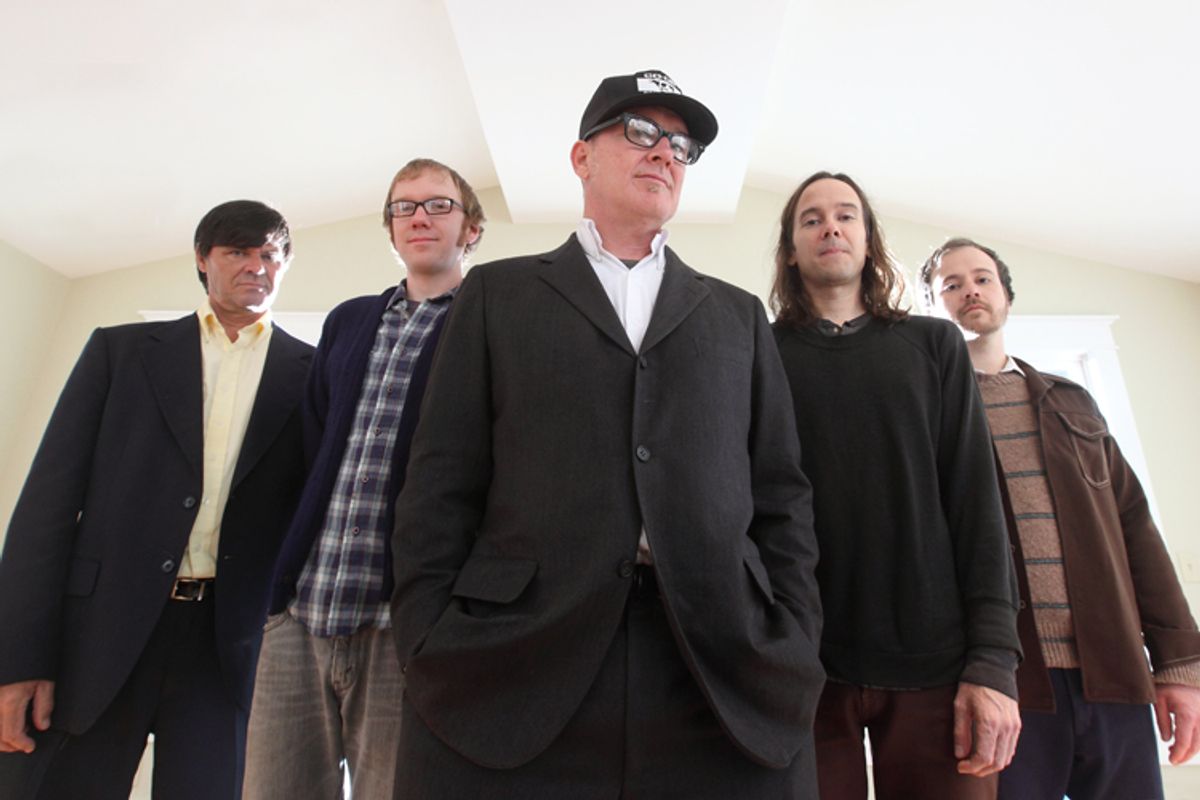 Already 2012 is shaping up to be a great year for songwriters, with a lively, lusty album from Canadian doom-folk poet Leonard Cohen, sharply written records by newcomers Bahamas and Sharon Van Etten, and upcoming releases by Todd Snider, Sun Kil Moon, Marissa Nadler and both Loudon and Rufus Wainwright.

Even among such great company, however, the best album of the young year is also the most modest. Lambchop’s 11th full-length, "Mr. M," won’t make headlines as the return of a grizzled vet or the arrival of a new talent. It likely won’t be a bestseller even by today’s standards, although it certainly should be. The Nashville collective are content to hang around the outskirts of any scene, yet remain consistently interesting to the point of being taken for granted even by their most ardent fans.

The band is led by Kurt Wagner, a man who wears the dapper blazer of an English professor and the farmer’s cap of a tractor parts salesman. Each of the group's 11 studio albums mines some new corner of a deceptively large sound that mixes Owen Bradley’s countrypolitan sophistication with variant strains of lush soul (Motown and Philly more than gritty Memphis, despite Wagner’s ties to that city). There are flourishes of Brill Building professionalism, Sinatra-style croonerism, and old-school soundtrack composition, and it’s all mixed together to create a sound that is subdued, low-key, laid back to a fault.

As consistent as Lambchop has been throughout the 200os, "Mr. M" marks a decided uptick, not just for the music but for Wagner’s lyrics. It heralds him, quite simply, as the best American songwriter working today. There’s more thematic and emotional heft here, as these 11 songs examine the nature of loss and life, albeit from obtuse angles. Weepy or cathartic these songs most certainly are not; Wagner confesses, but never in the mode of a confessional singer-songwriter. His lyrics are simultaneously impressionistic and concrete, using seemingly meaningless events — the kind most writers would never consider important enough to hang a song or even a verse on — to evoke something larger. “Took the Christmas lights off the front porch / what felt like February 31st,” he sings on “2B2.” What that means specifically is only the listener’s guess, but that line implies some low-level drama, some matter that has preoccupied Wagner such that he puts off such tasks until some nonexistent date. His songs talk assiduously around the big issues, which come across as too large, often too painful to confront directly.

Remarkably, Wagner never intended to be a songwriter. He trained as a painter, first at the Memphis College of Art and later at the University of Montana. Returning to his hometown of Nashville, he worked as a manual laborer to support his art — mostly laying floors. In the late 1980s, he and some friends started a band, although it was less a professional project than a pickup group. Membership was loose and often ballooned into double digits, both in the studio and on the stage (which often negated any potential profit from touring). Signing with the North Carolina independent label Merge Records — currently home to Spoon, the Arcade Fire, She & Him and Destroyer — Lambchop grew successful enough that Wagner was able to quit his job and devote himself full-time to music. On the other hand, music became so time-consuming that he had to give up painting for most of the 2000s. (In recent years, he has returned to the canvas; he did the portraits that grace the cover and liner notes for "Mr. M.")

He’s never had much use for the conventional subject matter of rock or country. His milieu is the household; he’s a domestic poet instead of a Southern rebel poet. His songs pad around the house in slippers and a robe, wandering from room to room as if trying to remember what they’re looking for. Car keys? Wallet? That old Jim Nabors record? Eschewing the typical verse-chorus-verse format, his song structures tend to be loose and fluid, subtly mimicking their everyday subject matter. And yet, Wagner can make even a line like “clean the coffeemaker” resonate with deep implications, and such observations accumulate into a portrait of life in all its mundane glory. Closing the album with a declaration of renewed love (“my stupid love has proved that to be without it would be a loser’s bit”) never sounds cheaply cathartic, but like an epiphany in the literary sense — a revelation writ perfectly life-size.

Lambchop is very much a product of the South in general and of Nashville in particular, with a back-porch ambience that mimics the slower pace of life below the Mason-Dixon. Geography informs his artistic temperament as well as his subject matter: This is a man who wrote a song based on Swap Shop, an East Tennessee radio program where listeners can sell anything from tractors to appliances to farmland. More crucially, Wagner is a student of Nashville music history, one well versed in the city’s raft of long-forgotten or never-remembered country hits. He routinely peppers his lyrics with references to unlikely heroes: “I saw the light beyond the sunset, nearby a little country church,” he sings on “Nice Without Mercy,” before undercutting the bucolic kitsch: “And it felt a bit like Little Jimmy Dickens.”

"Mr. M" is dedicated to the memory of another idiosyncratic Southern songwriter, Vic Chesnutt, who died of a possibly intentional overdose of muscle relaxants on Christmas Day 2009. He and Wagner were close friends and collaborators: Chesnutt sang on Lambchop’s 1998 album "What Another Man Spills," and the band backed him on "The Salesman and Bernadette" that same year. Chesnutt is never named in the lyrics, yet his spirit informs every line, apparent in Wagner’s turns of phrase and roundabout insights. “Loss makes us idiots,” Wagner sings on “Mr. Met.” “You made me spare, like used software.”  These aren’t songs about sobbing grief, but they do take in loss, estrangement and distance. How do you get back to the business of everyday life after such a loss? How do you make art despite your audience dwindling by that crucial one? According to "Mr. M," you simply notice the small things and let them accrue into some semblance of normalcy, however long and painful the process may be.