Fewer and fewer people are watching the Academy Awards every year. Blame "Transformers" 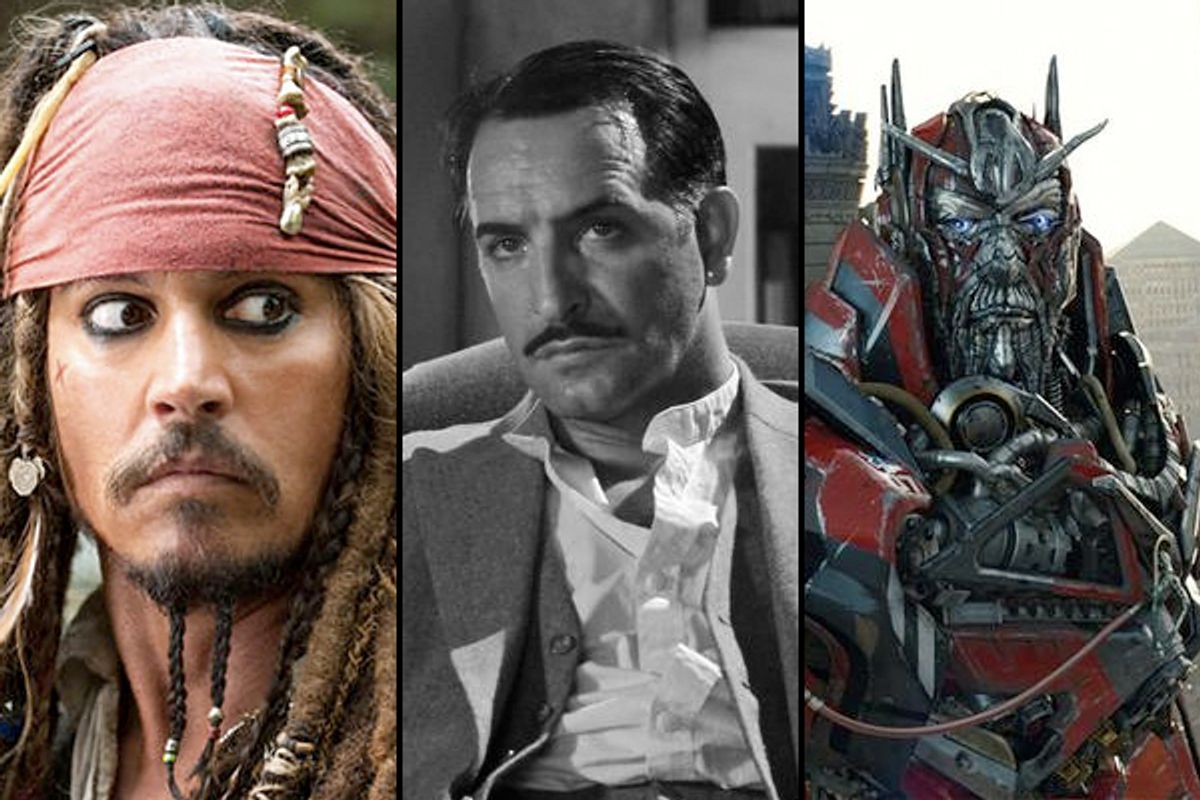 Johnny Depp, Jean Dujardin, and a transformer from "Dark of the Moon"
--

Three years ago, the Oscars announced the biggest change in its workings in decades. It expanded the best picture lineup to 10 films, up from five. We've seen two Oscarcasts since; the third one will be broadcast this Sunday on ABC.

The Academy of Motion Picture Arts & Sciences, which puts on the show, doesn't admit it, but the tweaks are born of a concern about one thing and one thing only: TV ratings. The academy makes a mint each year off the broadcast, traditionally one of the year's biggest shows. But the trend line for viewership has been heading downward for more than a decade. The academy's not in the poorhouse or anything; it can still charge an ever-growing premium for advertising, of course. But the show's not cheap, either, and those declining ratings are a very real indicator of the once fabled awards show's fading glory.

Here's the academy's biggest, and growing, problem: The movies winning Oscars are movies that nobody has heard about -- and, as a result, nobody is tuning in.

Five or six years ago, when movies like "Crash," "The Departed," "No Country for Old Men" and "Slumdog Millionaire" were winning best picture Oscars, the average box-office gross for the five best-picture nominees each year was in the $50 million to $70 million range — and "Crash "and "No Country" were among the lowest-grossing winners (adjusted for inflation) of all time. Those were the years that drove the Academy nuts. Bad enough that a movie about a guy who killed people by sticking some sort of pneumatic hammer on their foreheads won the best picture Oscar. The next year was about a slum kid from Mumbai. The ratings tanked during these years, hitting an all-time low of 32 million in 2007.

Then came the big change. In 2009, the switch did what it was supposed to do. The average gross of the films nominated for best picture went up an extraordinary $100 million, to approximately $170 million. The ratings took a jump to 41 million. On the one end you had "Avatar" — in inflation-adjusted dollars currently the 14thhighest-grossing film of all time— but also Pixar's "Up" and the popular family sports drama "The Blind Side." What won? A downer of an Iraq film called "The Hurt Locker," which made about one-fiftieth the amount "Avatar" did in ticket sales. Its $17 million made it by far the lowest-grossing best picture in the history of the Oscars.

2010 came next. There were more respectably big-ticket, high-grossing, critically acclaimed films to lavish awards on. There was "Inception," directed by industry darling Christopher Nolan, who'd been nominated for an Oscar already and wowed everyone with "The Dark Knight." There was "Toy Story 3," arguably the best-reviewed Pixar movie yet, if that seemed possible. And then "True Grit," the closest thing the Coen brothers will ever direct to a family film.

But there was a problem: The average gross of this lineup was down to $135 million and the winner was "The King's Speech," an agreeably middlebrow work about primogeniture and stuttering with a disappointing $138 million total box office. The Academy ignored Nolan and the Pixar folks, and the ratings were accordingly off 10 percent, making the show another of its lowest-rated ever.

Now we're up to this year. Let's look at the nine nominees, "The Artist," "The Descendants," "War Horse" and "Moneyball" among them. The average gross has plunged by more than half of last year's, back down to $62 million. In just three years, in other words, the box office of the Academy voters' picks has speedily regressed to more or less what it was before the big switch. In essence, the revamping has accomplished nothing.

Short of creating an affirmative-action program for blockbusters, there's little it can do at this point. First, the Oscars has the most integrity of any awards show. The academy runs a tight ship. Corrupt outfits like the Grammys, remember, allow a secret committee to overrule its membership's nominations to hide embarrassments and make for a more youth-friendly show. Shenanigans like that wouldn't fly in Hollywood.

Secondly, and worse, there's the sequel problem. Hollywood's love of the sequel (and movies that might produce a sequel) is well known. These films have increasingly come to dominate moviegoing. The last year a quote-unquote normal movie for adults was the year's highest-grossing film was "Saving Private Ryan," way back in 1998. 2007 was a landmark: The top five films were all sequels, reboots, wannabe franchises, or films based on superhero comics or toys — and there were five more in the top 20.

Well, this year, Gotterdammerung hit. In 2011, for the first time, the top-10 highest-grossing films of the year are all of that ilk. It's hard to keep track anymore. Was the latest Harry Potter a septoquel or an octoquel? I think that was the third "Transformers" movie this year, unless I'm forgetting one. I count at least three fourquels (the latest "Twilight," "Mission: Impossible," and "Pirates of the Caribbean" entries); what number "Fast Five" is in the "Fast & the Furious" series I haven't the faintest. Then there were a raft of straight-up sequels ("Sherlock Holmes," "Hangover," "Cars") and the new would-be superhero franchise, "Thor." And numbers 11 through 20 included five more sequels, reboots or superhero workouts. ("Captain America," "Planet of the Apes," the second "Kung Fu Panda," the fourth "X-Men" and — wait for it — the third "Alvin and the Chipmunks," coming in at 20.)

With very rare exceptions (the "Toy Story" sequels and not any others I can think of), no one seriously claims any of these are deserving of best picture honors. Of the top-grossing films of the year that weren't in one of these predictable categories, the highest, "The Help," was actually nominated for best picture. So it's not like the members of the academy aren't trying. It's just that there's nothing, really, for them to nominate in the category of high-grossing films worthy of a best-picture Oscar.

There are two Hollywoods now. One makes those cacophonous entertainments, which kids flock to see in noisy multiplexes each weekend. The other makes films for adults, which we see in the calmer art theaters or in the comfort of our own homes on home video, Netflix, or on demand. They don't make much money, so they leverage what influence they can. One of these has been their efficient hijacking of the Oscars race each year. If you don't overspend in production and play the awards-season game well, you can do all right financially.

It's hard to see how this situation will change any time soon. The prognosticators this year say "The Artist"— an all-but-silent film from France with a current gross of $28 million — will win best picture; if it does, it will be the second-lowest-grossing film ever to get that award. The industry will grumble; the ratings won't go up, and will probably plummet again. The rest of Hollywood will go back to work on their respective studio's boffo B.O. hopefuls for 2012. One of the big studio tentpoles this summer? Universal's "Battleship" — yes, based on the venerable family game. I doubt we'll be hearing about it when next year's Oscar nominations are announced.