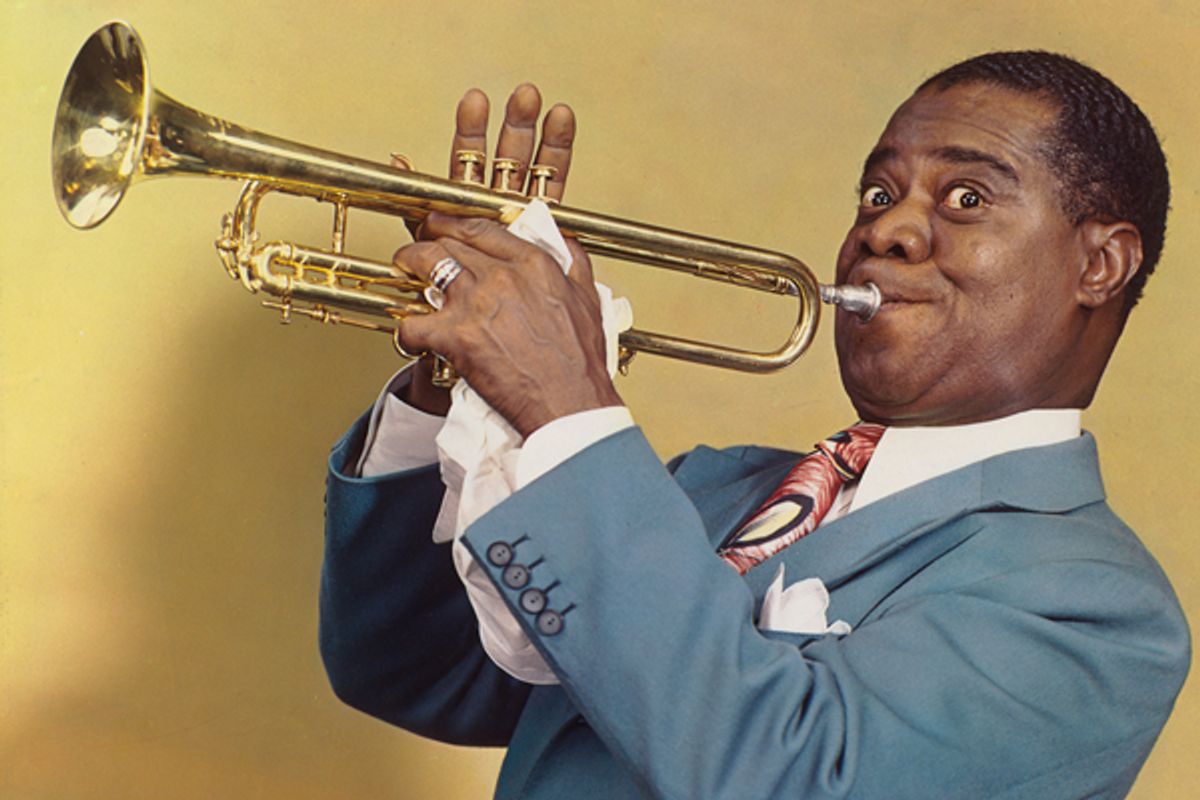 Open almost any newspaper this weekend, and you'll be confronted with color pictures of the stars who dominate 2012's cultural scene. In the 1930s and '40s, however, most readers didn't have the luxury of full-color photography -- so New York Daily News photographer Harry Warnecke's incredible tri-color carbro magazine images stood out like postcards from the technicolor world of Oz.

Over the course of his long career at Gotham's first tabloid, Warnecke (and his assistants) captured portraits of everyone from Louis Armstrong and Orson Welles to Dwight D. Eisenhower; 24 of these images, now part of the permanent collection at the National Portrait Gallery in Washington, D.C., will be exhibited in a show set to open next week.

Curator Ann Shumard spoke to me about Warnecke's long career and complicated photographic technique. Click through the slide show that follows for face time with some of the early 20th century's most magnetic characters.

I'll start with a very basic question: Who was Harry Warnecke?

Harry Warnecke isn't someone we have a great deal of biographical information for. What we really know about is his career. He joined the New York Daily News just two years after its founding; the newspaper was established in 1919, and in 1921 Warnecke was hired as a staff photographer.

The Daily News was the first tabloid in New York, and it envisioned itself right from the start as a very picture-heavy newspaper. Even at the very beginning, the logo for the newspaper had an image of a camera in it. There was no question that photographic images were going to be privileged in this particular publication, so being a photographer for the Daily News meant you were right at the center of the newspaper's mission.

Warnecke did black-and-white pictures for the paper; he was kind of a roving cameraman, and caught a number of on-the-spot images. But by the mid-1930s, he had been bitten by the color bug. He was very intrigued with the idea of setting up a color studio at the newspaper -- and that's really when his career took a transformative step, because he established one of the first explicitly color studios in publishing.

He stayed with the New York Daily News right up until he retired in 1970, so he was there for 49 years. During that period of time, he was really the dean of the color photography studio. He worked with a number of assistants, and they got credit along with him (which is interesting, because oftentimes the assistants don't); over time they took on the same role that he had in terms of doing quite a bit of the color photography.

During the course of his time at the Daily News, in addition to producing the images that were reproduced in the Sunday magazine section, Warnecke was also making exhibition prints that could be entered in various contests -- and he certainly won awards along the way.

Warnecke died in 1984. He did periodically have a little column in the Daily News, and would talk about camera techniques and pointers for amateur photographers, but beyond that, he hasn't been the subject of any kind of serious study. I think if you were to conjure him up and have a conversation with him, he certainly wouldn't claim to have been a fine art photographer. He was a news photographer. He enjoyed his role in capturing the major personalities of the day -- whether they were Hollywood folks or athletes or World War II generals.

Can you describe the technique he used to make these color photos? Was it very uncommon for the time?

At this point, in the mid-1930s, color film as we know it had not yet emerged. Hollywood films were in black-and-white; there were just a couple of experimental uses of color technology in Hollywood film ... What Warnecke was working with was an earlier process that involved the use of what was called a one-shot camera. A one-shot camera simultaneously exposed three black-and-white negatives, each through a different-colored filter (the filters were red, green and blue). Those black-and-white negatives were processed and printed to create bromide prints, and the bromide prints were placed in contact with pigmented gelatin tissue ... They were then placed in contact with tissues that carried complementary colors ... There's basically a reaction that happens when these are placed together; you ultimately end up with pigmented tissues that carry the primary colors that are needed to create a three-color assembly print.

It's a very time-consuming process, and certainly not one that the amateur could do; this was really only something that you could do in a studio that was fully set up to do this. After the tissues had been washed and dried, they had to then be assembled on a matrix in order to get the perfect registration, so that you didn't have any blurring, or funny off-register color.

The color carbro process is definitely a complicated one. It yields really richly-hued prints, because the color actually derives from pigment that is suspended in the gelatin, rather than from color dyes. That's one of the reasons that the color carbro prints from the '30s and '40s still have this wonderful, vivid color; it's unlike the dye-based color processes that we're familiar with. Even if you look at a family snapshot that was taken in the '60s or '70s, oftentimes the dyes have shifted and the color is no longer true to the original. That's what differentiates the color carbro process from these later, dye-based color processes: It is so much more stable, and the colors really retain that wonderful rich saturation that makes them so appealing.

When these appeared in the New York Daily News, did they appear alone, as photo features? Or did they normally accompany full, written profiles?

Sometimes they were part of a story; other times they were simply cover images. The photo of "Babe" Didrikson [slide 2], for example, was part of a series of pictures of her in action on the golf course -- and there was a story that went with that. But more often than not, there was simply a caption that would appear in the main part of the newspaper that would draw the reader's attention to the fact that the photo was in what they called the "Coloroto" section of the paper. For instance, the caption for the W.C. Fields portrait [slide 11] said, "W.C. Fields is on the cover of today's 'Coloroto' section. His remarkable nose wears its usual rosy glow, and his right elbow is in its natural bent position." And of course, he's shown hoisting this frothy mug of something (obviously not real beer). Clearly, the color was part of the story -- the idea that he had a fondness for drink, and the rosy glow of his complexion as a result.

What's interesting is that the photographers were always identified at the bottom of the captions. So for the picture of W.C. Fields, at the bottom, in bold italic type, it says, "This News color photo, made in Hollywood by Warnecke-Elkins" -- Elkins was one of Warnecke's colleagues and assistants -- "is another in a series of color portraits of stage, screen and radio celebrities. Next Sunday, Carole Lombard." Unfortunately, we don't have the Carole Lombard portrait.

How did these photographs become part of the museum's permanent collection?

The photographs have come to us from a variety of sources. The first one to enter the museum's collection was a wonderful photograph of Edgar Bergen [slide 5] ... that was purchased at a public auction in New York, back in 1992. Our curator of photography at that time was totally captivated by the picture -- as were all of us on the staff. She was very interested in trying to find out more about the maker of the picture, and if there were more of them somewhere. Her search ultimately led her to Harry Warnecke's widow, Elsie, who still had a cache of the photographs that he had made for exhibition purposes and for the various News photography contests. And so it was from her that a number of the Warnecke pictures came to us; she made a gift to the museum's collection. Since that time, additional images have periodically surfaced, both at auction and also in the hands of private dealers. When an interesting image has come up that enhances our collection and represents someone that we wouldn't otherwise be able to show in this particular medium, then we have acquired it.

[I want people] to understand what a remarkable thing it was to have a color image in a newspaper in the 1930s. I think that, in a way, black-and-white has become the novelty today that color was in the '30s. Now we're just completely surrounded by color, everywhere we turn, and when something's in black-and-white, it sort of startles us and really captures our attention, because it's so different from what we're used to. In the 1930s, everyone was just used to black and white. So this burst of color -- and the richness of it -- I think was startling, and tremendously attractive.

"In Vibrant Color: Vintage Celebrity Portraits from the Harry Warnecke Studio" will be on display at the Smithsonian's National Portrait Gallery in Washington, D.C., from March 2 through Sept. 3, 2012.