Santorum flunks the history of home-schooling 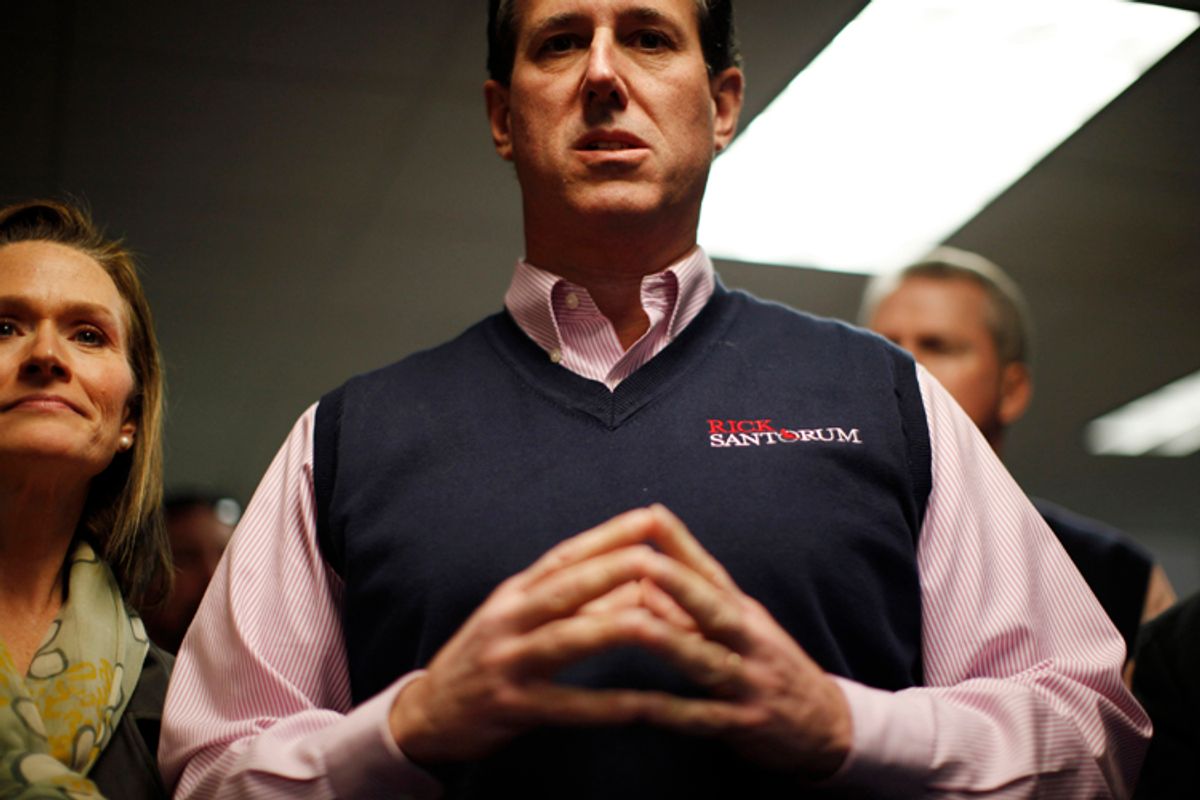 At the Republican debate Wednesday night, Rick Santorum repeated a claim he's been making, that the federal government, and the state governments, should "get out of the education business." Last weekend, Santorum declared public education "anachronistic." If elected, he would home-school his children in the White House, just like -- he claimed -- most presidents did in the first 150 years of our national life.

“Where did they come up that public education and bigger education bureaucracies was the rule in America?” he asked. “Parents educated their children, because it’s their responsibility to educate their children.” The presidential candidate suggested that America should look to its 19th-century educational system to prepare this generation to meet 21st-century problems.

“Yes, the government can help,” he said, “but the idea that the federal government should be running schools, frankly much less that the state government should be running schools … goes back to the time of industrialization of America when people came off the farms where they did home-school or have the little neighborhood school, and into these big factories, so we built equal factories called public schools. And while those factories as we all know in Ohio and Pennsylvania have fundamentally changed, the factory school has not.”

The fraudulence of almost every single one of these claims makes Santorum himself a cautionary example of the failures of the American education system. (One wishes that as a former U.S senator, Santorum would at least know that state and local boards of education, not the federal government, run public schools.) Santorum makes up facts, misunderstands education in early America, and manages to invoke the legacies of both racists and secularists, neither of which, I assume, he wants to claim as his forebearers. The solution to our education crisis must not be to withdraw public interest and investment from education, leaving people like Santorum to pass on these misunderstandings to another generation.

First of all, Santorum’s assertion that for the first 150 years, most presidents home-schooled their children at the White House is unfounded. I checked, and it turns out there were very few presidents during that period who had school-age children while they held office.

But even if you give Santorum some leeway, things still don’t pan out. Santorum may find it pleasant to imagine George and Martha Washington sitting by the hearth with her son Jacky Custis, helping him read from a primer, but in fact, Washington imported a Scottish tutor named Walter Magowan to live in Mount Vernon and provide the classical education his stepson needed to enroll at King’s College (today's Columbia University).

So Santorum’s just plain wrong on the home-schooling in the White House thing. He seems to have invented his home-schooling history in order to make the broader assertion that America did a better job teaching children in the 18th and 19th centuries. He’s correct that the role of government was smaller, but does he really want to return to a time when very few children got a decent education?

In 1840, only around 55 percent of white children attended primary school, and in most Southern states, educating African-Americans was a crime punishable by fine, prison or whipping. It wasn’t until 1918 that Progressive-era reforms ensured that children in all the states completed elementary school (in part to keep them out of the factory).

If Rick Santorum had been a better history student, he would know that presidents spent the first two centuries of American history working to support the education system he now wishes they disliked. Take Thomas Jefferson, founder of the University of Virginia and patron saint of today's small government conservatives: He consistently expounded the virtues of public education. In his 1779 Virginia “Bill for the More General Diffusion of Knowledge,” Jefferson argued that without public schools, only the rich would be educated, leaving poor but potentially productive citizens unable to participate effectively in the democracy. “It is better that such should be sought for,” Jefferson wrote, “and educated at the common expence of all.”

In light of his comments Friday that President Obama wants to send students to college in order to "indoctrinate" them with a secular worldview, Rick Santorum might be especially chagrined to learn that in the Elementary School Act Jefferson proposed in 1817, he insisted that “no religious reading, instruction or exercise, shall be prescribed or practised.” Similarly, in “Notes on the State of Virginia,” Jefferson advocated for teaching “the most useful facts from Grecian, Roman, European, and American history” instead of the Bible. The point is, the American president who most eloquently promoted public education did so specifically, in part, to try to prevent the religious fundamentalists of his day from being able to use schools to indoctrinate children with religious beliefs.

In the end, it’s not the early presidents like Jefferson that Santorum evokes, but rather the four-time presidential candidate George Wallace. Not long ago, hearing a politician rail against federal involvement in public education would have put every listener in mind of the Alabama governor who pledged in 1963 to “stand in the school house door” to prevent the “unwelcomed, unwanted, unwarranted and force-induced intrusion upon the campus … of the might of the Central Government.” Wallace refused to “submit to the illegal usurpation" of the “right of state authority in the operation of the public schools.” Wallace was referring to the Supreme Court’s 1954 order that black and white children be educated together. There's no evidence Santorum favors racially segregated schools but he certainly echoes the "states' rights" arguments of people who did.

The Court’s decision in Brown v. Board of Education is just one of the federal interventions that has made American education better, fairer and more equitable. Think also of the Morrill Act, passed by the Republican Congress in 1862, which created the land grant colleges (and helped support Santorum’s alma mater, Penn State). Think of the Freedmen’s Bureau schools, which taught former slaves how to read after the Civil War, and the 1917 Smith-Hughes Act, which created vocational programs in high schools. Federal initiative created the GI Bill in 1944, which sent veterans to college and paved the way for decades of American economic primacy. These weren’t preemptions of state sovereignty or individual liberty; they were bold statements about the essential importance of education to our democracy’s economic and civic life.

There are, no doubt, terrible problems with American education today, and we need big ideas. But those ideas shouldn’t be drawn from an ignorant, if not dishonest, view of the past that imagines presidential home-schooling or a pre-industrial golden age. From Jefferson to Horace Mann to “Freedom’s Teacher” Septima Clark, from the Freedmen’s Bureau to the GI Bill, there is plenty in our real past to inspire us to action today. But getting himself tangled up with the legacy of George Wallace, Rick Santorum has gotten himself on the wrong side of history.