Santorum's JFK story makes me want to throw up

Kennedy never said anything like "people of faith have no role in the public square," and the GOP zealot knows that 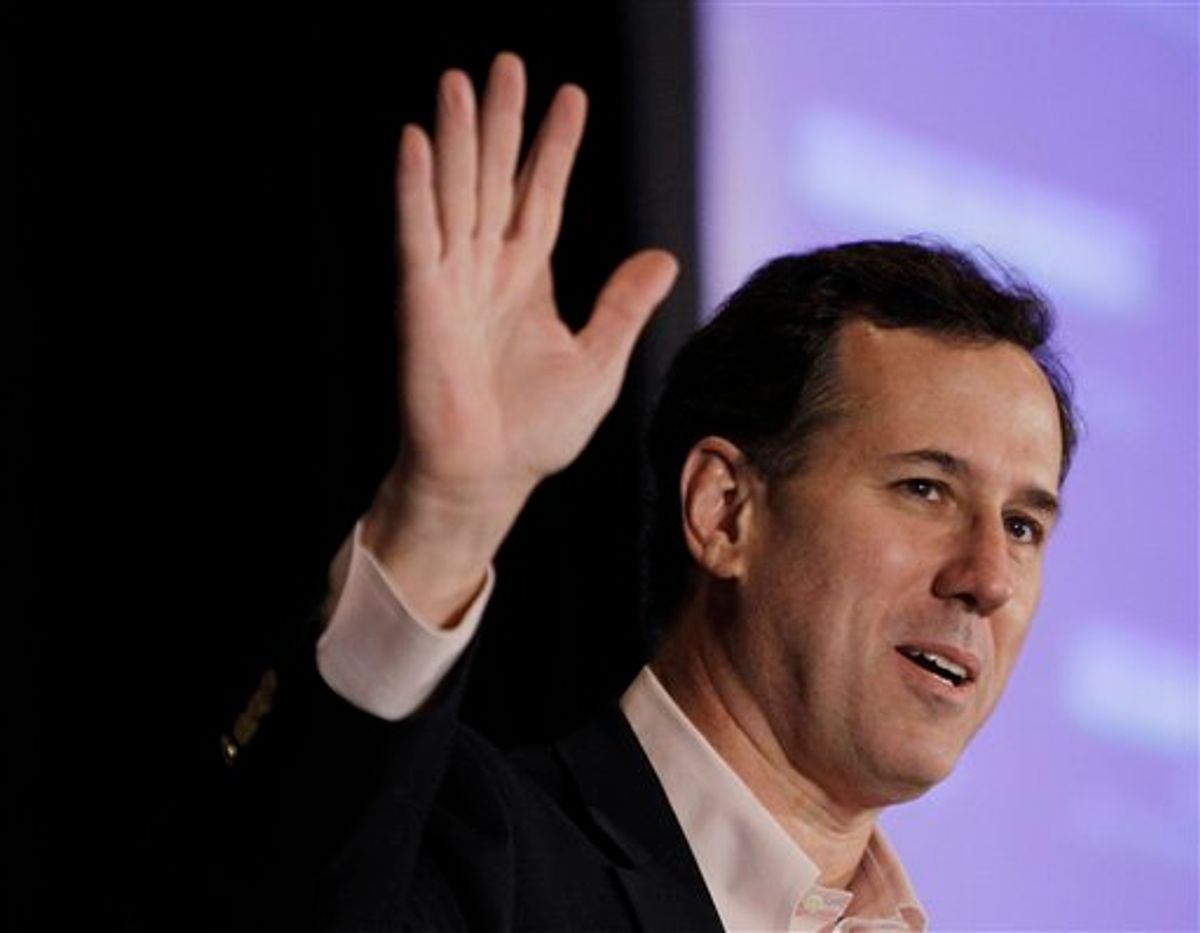 "We establish no religion in this country, we command no worship, we mandate no belief, nor will we ever. Church and state are, and must remain, separate. All are free to believe or not believe, all are free to practice a faith or not, and those who believe are free, and should be free, to speak of and act on their belief."

Rick Santorum teed off on a venerated former president Sunday morning for telling America that the separation of church and state was "absolute.." Was it the guy responsible for the above quote? No, that was Ronald Reagan, running for reelection in 1984 (h/t BB).

It's Democrat John F. Kennedy who made Santorum "throw up," the GOP presidential contender told ABC's George Stephanopoulos, with his famous 1960 speech to Baptist ministers trying to assuage widespread fears about his Catholicism in order to become our first, and still our only, Catholic president. Santorum claims that JFK said that "people of faith have no role in the public square," and urged ABC's viewers to go read the speech for themselves and see.

So I did. (It's here.) And not surprisingly, that's not what Kennedy said at all.

I don’t believe in an America where the separation of church and state is absolute.  The idea that the church can have no influence or no involvement in the operation of the state is absolutely antithetical to the objectives and vision of our country. This is the First Amendment.  The First Amendment says the free exercise of religion.  That means bringing everybody, people of faith and no faith, into the public square.  Kennedy for the first time articulated the vision saying, no, ‘faith is not allowed in the public square.  I will keep it separate.’  Go on and read the speech ‘I will have nothing to do with faith.  I won’t consult with people of faith.’  It was an absolutist doctrine that was foreign at the time of 1960.

Let me start by saying: Santorum sounds literally hysterical. It's a troubling sign of the GOP's desperation that he's virtually tied with Mitt Romney for the lead in the 2012 primaries. It pains me to actually have to take him seriously.

Of course, there's no place in Kennedy's speech where he said "people of faith are not allowed in the public square," or anything close to that, and Santorum's saying it three times doesn't make it true. Here's one key passage:

I believe in an America where the separation of church and state is absolute, where no Catholic prelate would tell the president (should he be Catholic) how to act, and no Protestant minister would tell his parishioners for whom to vote; where no church or church school is granted any public funds or political preference; and where no man is denied public office merely because his religion differs from the president who might appoint him or the people who might elect him.

I believe in an America that is officially neither Catholic, Protestant nor Jewish; where no public official either requests or accepts instructions on public policy from the Pope, the National Council of Churches or any other ecclesiastical source; where no religious body seeks to impose its will directly or indirectly upon the general populace or the public acts of its officials; and where religious liberty is so indivisible that an act against one church is treated as an act against all.

For while this year it may be a Catholic against whom the finger of suspicion is pointed, in other years it has been, and may someday be again, a Jew— or a Quaker or a Unitarian or a Baptist. It was Virginia's harassment of Baptist preachers, for example, that helped lead to Jefferson's statute of religious freedom. Today I may be the victim, but tomorrow it may be you — until the whole fabric of our harmonious society is ripped at a time of great national peril.

It is absolutely clear that Kennedy accepts "people of faith in the public square" – his goal is to make a place for people of every faith in our public life. Kennedy doesn't even go as far as Christian right hero Reagan, who actually said the separation of church and state protects the right of non-believers, too.

Kennedy doesn't say he won't consult with faith leaders; he says he won't take "instruction on public policy from the Pope." In fact, he confided in and took advice from Archbishop Philip Hannan, whom he befriended when he was first elected to Congress; Hannan gave the eulogy at Kennedy's funeral. Sadly, Hannan died last September, after a long career as Archbishop of New Orleans, or else he might be able to refute Santorum from experience.

Kennedy doesn't promise to renounce his own Catholic beliefs or disobey his conscience, either:

If the time should ever come — and I do not concede any conflict to be even remotely possible — when my office would require me to either violate my conscience or violate the national interest, then I would resign the office; and I hope any conscientious public servant would do the same.

Ironically, Kennedy spoke passionately on behalf of the Catholic Santorum's right to be in the public square.

If this election is decided on the basis that 40 million Americans lost their chance of being president on the day they were baptized, then it is the whole nation that will be the loser — in the eyes of Catholics and non-Catholics around the world, in the eyes of history, and in the eyes of our own people.

Santorum didn't lose his chance to be president on the day he was baptized. He lost it – if he ever had it – when he lied about our first Catholic president, who just happened to be a Democrat. For shame.