Seeing my father, through my cousin George

In \"The Descendants,\" my cousin George Clooney channels a painful family story -- one he might not have even known 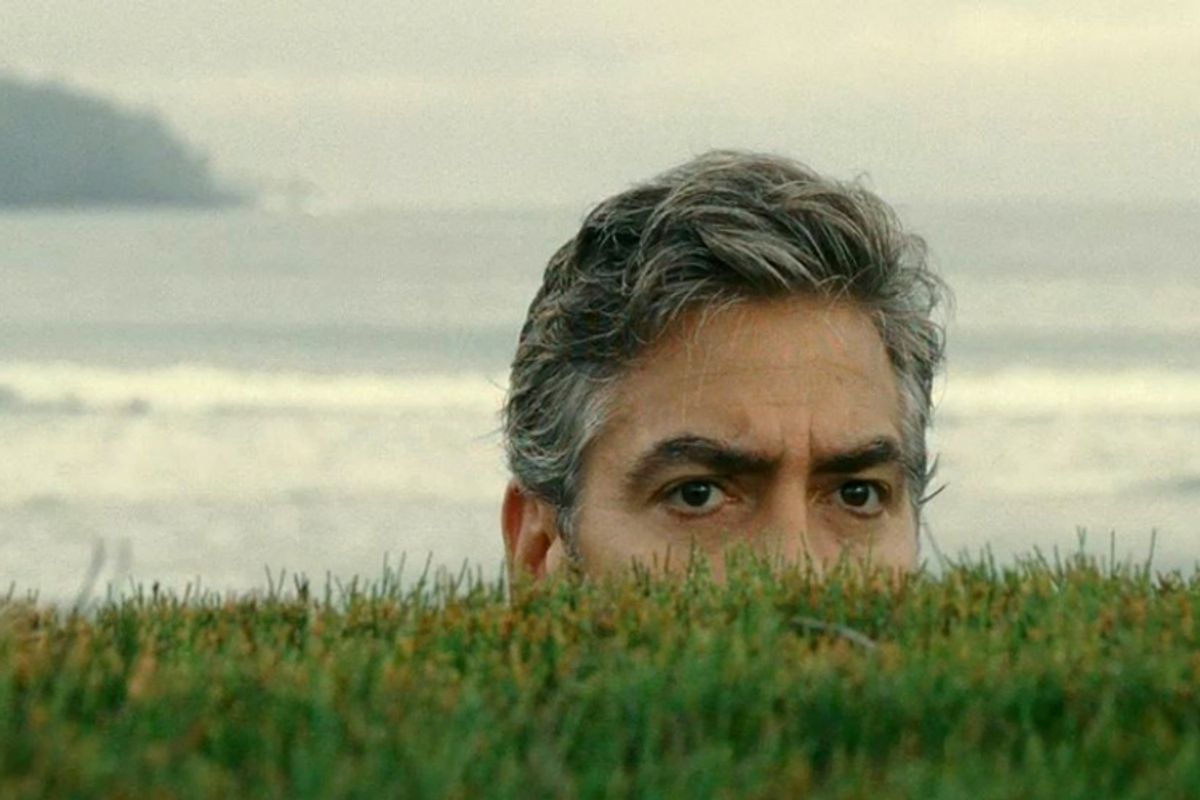 George Clooney in "The Descendants"
--

Every icon has a person living inside. It’s true of famous people, and true of everyday icons, too — the idealized figures against which we hold the real people we love. When iconography and reality press close enough to break the skin of one another, things can get uncanny quickly. And things got really uncanny for me when I saw "The Descendants."

One reason for this is that my cousin is George Clooney. He’s older than I am, old enough to have fathered me if he’d really had to (he would have been a high school junior, but, hey, our family’s from Kentucky). I tell you he’s older only because I don’t want you to get the false sense that we grew up together. Rather, I grew up watching him. I was 8 and 9 and 10, for example, when George was on "The Facts of Life" (and believed, as only an 8- and 9- and 10-year-old girl might, that this was a good career move for him).

I grew up admiring my cousin George, then, in the way cousins do older cousins. Like many younger cousins, I witnessed his achievements mostly from a distance. And in that way my relationship with George Clooney is sometimes like the relationship of a lot of moviegoers with George Clooney. He is a cultural icon, after all, with his own channel on my Time Warner pay-per-view menu. Because the icon of George Clooney is so culturally pervasive, I see him on big screens and small screens more often than I see him as a member of our family, at family gatherings (where he is charming, kind, cool and venerable, as you’d expect an older cousin -- and George Clooney -- to be).

I have never written about my cousin because I think family should be a safe haven from exploitation. "We don't do that," I told someone at a family reunion a couple of years back, as she tried to take a cellphone photo of George’s ass as he leaned over some ill-placed guacamole. “It’s for the ladies at my church," she replied.

But I’m writing this now because this essay isn’t really about George Clooney. It’s about my father, and the culture, and the weirdness of fame and art, and mostly the weirdness of remembrance. It’s about what happens when the art of one far-flung family icon makes you remember so viscerally the life of another obscure one, an icon famous nowhere but among the barns, and in the four shabby chambers of a daughter’s heart.

I just watched "The Descendants" for the second time. I have never seen my older cousin look so vulnerable, and I think this is one part of why he reminded me of my father. George Clooney is not related to my father; George is my mother’s nephew. But my father’s name was George Matthew (he went by Matthew) and in the movie, George’s character’s name is Matthew. More important, my father, Matthew, died after a coma, and in the movie, Matthew’s wife dies after a coma. This is what triggered it: the look of the pallid skin of Matthew’s wife, the face of a coma, jaundiced and slack-jawed and tight around the eyes so that, like a skeleton — like death — it takes on the appearance of genderlessness. Elizabeth, Matthew’s wife, looked just like my father, Matthew, in his coma, down to the crusty mouth and the clawed-up hands. I hadn’t seen a coma since my father died — not one that looked so real. And that’s what really started it, the avalanche of coincidence.

In the movie, Matthew looks confused and quietly, desperately sad. This is a look my father wore, a lot, and one I wish I could reach through the ether to relieve. When I was 21 I thought my angry quips to my father were merely the preamble to a closer, more honest dialogue with him. I yelled only to wait for his answer. But he died before he could respond. So my unmeant words are the words that are left. They hang in the air.

In "The Descendants," Matthew’s daughter also loses a parent in the middle of a conflict, but because her father survives, she is able to mend things with him, to admit she admires him. They work together to undo her mother’s paramour, and this conspiracy bonds them (Aristotle said it: The enemy of your enemy is your friend). The sweet, tepid ending of the movie is so good because it’s so prosaic; Matthew and his daughters watch TV, their feet sticking out of Elizabeth’s childhood quilt. This is what you do with the relics of the dead. You keep living with them until (like the fact of the death itself) they acquire the ordinariness of truth.

George Matthew became my father on Nov. 24, and in the movie another father dies on Nov. 24. In "The Descendants," Matthew’s wife is buried at sea by Matthew and his daughters. I, too, buried my father at sea. "The Descendants" shows the ashes clouding the ocean and the leis skimming the water like fat skimming soup.

My father’s ashes in the marina, and the blooms that followed, looked the same. They circled one another like free-form, cardiac amoebas. Thus the movie reminded me of an image I’d never forget but hadn’t remembered for a long time.

I don’t know whether George Clooney knew my father very well. Because my mother lived with her older sister, I grew up with my aunt Rosemary’s branch of the family in California. George moved to California in the early '80s, but he moved out of my aunt’s house and onto his own life quickly. My aunt’s children were akin to my mother’s siblings, and they were the ones who knew my dad before and while my folks were married, who were my godmothers and godfathers and the attendants at my mom and dad’s wedding. My mom was sexually abused when she was a kid, though, and eventually came out about it, and coming out meant that she got exiled from my aunt’s branch of the family. When my dad died a couple of years later, it was not a surprise that I didn’t hear anything from the family I’d known as family.

But it was a surprise that, a decade or so later, it moved me so much to watch my cousin George encountering what I encountered with my father. It was a surprise that somehow, strangely, it comforted me. Probably because "The Descendants" extends the relationship between father and daughter beyond the point of crisis (which is part of what makes the movie so interesting, because so few films move relationships beyond a point of crisis without being conventional). Probably because, wishing for my dad, I lived vicariously through the characters.

It is also, though, the mere act of witnessing "The Descendants" that comforts me even as it tears me up; and I suppose this is the power of art, and of story — only connect, as E.M. Forster wrote. To see George playing a Matthew staggering under the familiar weight of mourning, under the specificity of a circumstance I have known and stumbled under — to see it, felt like my cousin was comforting me. To see my father’s hurt, and the same hurt I have felt, spread across the movie-huge space of his monochrome eyes — eyes not the same shape (the shape is my father’s) but the same near-black as mine — it was bizarre, and at the same time evocative of an eerie solidarity.

Please don’t misunderstand me. It is not a personalized solidarity. Whether or not George knew or remembered my father, Matthew, he does not know how my father, Matthew, died — we’ve never talked about it. (Why would we?) George would never know the slew of coincidences piled between my own history and "The Descendants’" script. (Why should he?) And yet, still, how weird and how wrenching to watch him live through such a thing.

Which is why the movie is so good. At its end I cried and so did a woman in a butch haircut three rows ahead of me. Which shows what I’m trying to say:  You don’t have to be George Clooney’s cousin, you don’t have to share his eye color (which might just be another coincidence; our grandmother had blue eyes, after all) to have a great movie evoke that desired effect, to move audiences not by replication of experience but by honesty of emotion, by verisimilitude, by sheer earned vulnerability, by the remembrance of life’s saddest turns and most commonplace glories.

And this, this tribute to art, and challenge to life: how strange that it was my cousin whom I did not really know, a human playing an icon playing another human, who made me feel that, of all my family, he understood my sadness and mourning and hope.

And in this way, though we all fail in the face of icons — be they famous or familiar — the truth of iconography can sometimes bring comfort closer.